Take Your Voice and Run With It! 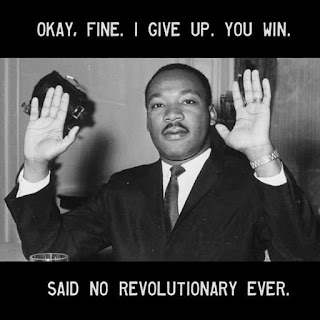 Take Your Voice and
Run With It
by Cindy A. Matthews
I originally thought we'd discuss the primary disappointments this week, but then this beautiful story popped up into my email box, capturing all the excitement and joy of the political revolution, and I knew we all needed to hear it. It reminds us the revolution will be driven by the young and young-at-heart, it is ongoing, and it's far from over. (Besides, there are still 2.5+ million ballots left to be counted according to the California Secretary of State's office.)

As Bernie says to Aziz: "Take it (your voice) and you gotta run with it!" We must not allow the forces of greed and selfishness silence our voices and silence our progressive agenda.

And as Aziz says:  "I need people to know how genuine and caring Mr. Bernie Sanders really is. The movement goes on."

So, come along with Aziz and witness his personal interaction with Bernie Sanders. You know it's a story worth telling and sharing and never, ever forgetting. Feel the Bern.


My Experience With Bernie
by Aziz Rubakovic

Yes indeed, that is me! (See video above.)

I go to UCLA, but when I heard Bernie was coming to the Coachella Valley on May 25th I knew I had to go see him in my hometown, a smaller, more intimate environment than probably anywhere else he'd be speaking in California, and certainly more intimate than L.A. In fact it was the first time any politician had come to the Coachella Valley to speak in more than 60 years. He was here for a little break from campaigning the week before, so I guess Palm Springs had left a good impression. I managed to hitch a ride home with a friend at 2 AM the day of the rally, arrived at 4, went to bed (believe me sleeping was hard I was so excited), woke up at 6, and was in line by 7 AM.

The atmosphere was friendly and buzzing. Lots of young people, many even too young to vote. Lots of old people as well. From the educated to the uneducated, from the immigrant and poor to the white and rich, everyone knew that this man was the man who represented their beliefs who was honest and who would take real steps to improve the circumstances of everyone's life.

There was a man in a big Bernie head. 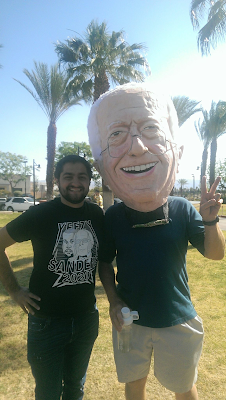 The line was long. Some people had been waiting since 2 AM. 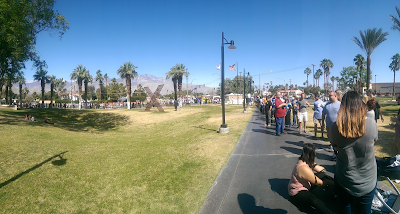 The name of the field was "Big League Dreams" which I found incredibly appropriate. 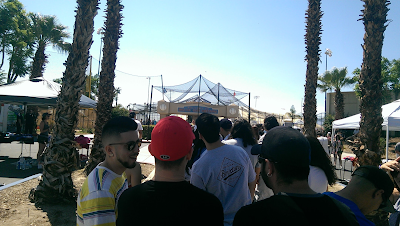 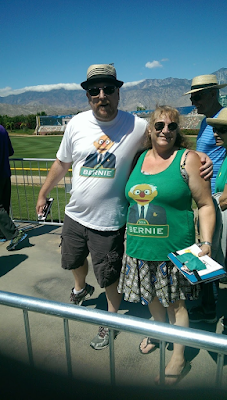 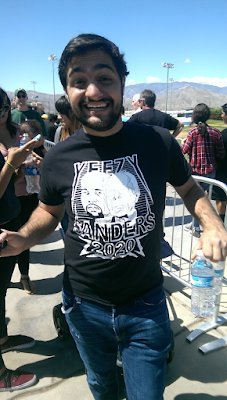 Funny shirts. (This first one is me.)

The speech Bernie gave was impassioned, focusing on issues that affect the Coachella Valley such as immigration and the minimum wage as well as big banks, health care, education, etc. At the end of the rally he went through the crowd and shook everybody's hand quickly. He passed me by. I blanked. I yelled after him, "Thank you for giving us a voice Bernie!" because really no candidate ever truly had for progressives like me. I think the message resonated with him because he turned around, walked back, grabbed me by my shoulders and said, "Thank you! You gotta take it and you gotta run with it!"

I think that he's been sending that message to all of his supporters throughout the campaign. My triplet sister Sabrina was behind me and managed to capture the whole interaction from a great angle on her iPhone.

As a half-Serb, half-Palestinian 22 year old millennial who came of age during the Clinton controversies and Bush lies, if I've felt anything towards politics it's  a fundamental belief that it is corrupt. It was never a question for me. Politicians had lied my whole life. The public knew this, and no one really cared. Why even get involved? We heard the "Change" slogan with Barack in 2008, but even then it didn't seem quite real. Change is nice but what about the growing income inequality? Obama seemed like a much more charismatic  HRC, but intuitively you could feel he wasn't too different.

And then along came Bernie, a candidate who for the first time in my entire life always said the truthful thing, even if it's the unpopular thing. He didn't think "socialist" was a profanity for God's sake. Welcome to the rest of the world America. All of his views resonated with me. The middle class has been shrinking, education is faltering, health care is terrible etc., and all anyone ever promised was that they were going to "improve the economy."

Here was a candidate who was addressing my--and every reasonable person I know--concerns for the country in non-ambiguous, non-politicized, honest terms. His method of communication, unlike any politicians I've ever listened to in my 22 years, is straightforward, rational and non-narcissistic, which all implies  Bernie is the real deal. Compared to the racist ramblings of Trump, or the vacuous promises of Clinton, it's like a breath of fresh air I never realized I was missing.

Real change from a real Senator who had been fighting all of his life for these values. Who knew that the movement we all craved wasn't about him becoming president but about him changing the political landscape and getting those who also craved true progressive change elected? No presidential candidate whose only goal was to win votes would say anything other than "the buck stops with me."

Bernie wants something real. His opinions are informed and reasoned, they matched my almost to a T. (As a Palestinian especially, it was nice to hear at least one candidate giving the Palestinian people any attention). And when he grabbed me and looked me in the eye, he went from being a figure who said stuff I agreed with on TV to someone who I knew truly wanted to affect change in a large portion of this country. He was like my firm, friendly grandpa. In that moment, when he came close to me and looked into my eyes I could feel it. I could feel the power of this movement, and I could feel this man's authenticity.

In the political landscape in which I had come of age, it was like meeting a unicorn. #feelthebern

Stand Up For
What You Believe!
by Jim Kemble

Bobby Lee: BTC Price to Escalate to $…
Best Gaming PC Build for 1440p: Under…
Afraid or not, life still marches for…
How to battle decreasing Testosterone
Expressionist Rugs and Capturing Emot…
I’m a senior living in Newbury, Vermont. I’ve been dismayed with the way that democracy has lost its way in the USA.

I suggest that all of us who support Bernie should write in his name on the ballot in the November election. This may seem drastic, but if one has a principle it shouldn’t be suppressed. Let’s be honest and true to ourselves.

Some will argue that action would be naïve. That’s what I’m going to do anyway. I know a few others who plan to do the same thing.
Stand up for what you believe!
*** 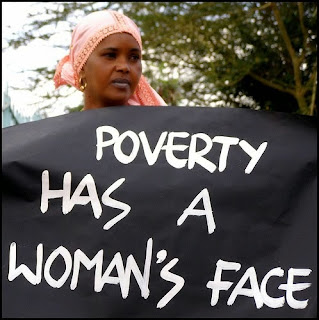 This Woman is Bernie Strong!
a weekly commentary by a female Bernie supporter
The Glass Ceiling Isn't a Priority
by Barb McMillen
My stomach aches. We woke up this morning and Bill read me the AP declaration. There was no way to express the anger I felt. Mainstream media is slapping us in the face. But here's the thing, during the day the headlines started to manifest themselves: HRC Breaks the Glass Ceiling, First Time a Woman Nominated, or Glass Ceiling President!

Glass ceiling? Glass ceiling! It's not even on my list of priorities. It's their issue--those people who feel being denied running for president is what this is about. 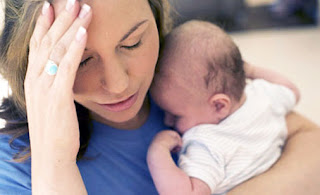 Then my thoughts went to Nancy Pelosi and Barbara Boxer and how much anger they have probably built up over the years dealing with the McConnells of the world. On the other hand, I see women every day making $8 or $9 dollars an hour, many of them single mothers. I see women without health care, with men telling them what female issues can be covered by insurance. I see women every day crying in poverty and not making as much at their job as their male counterparts. And then I see the sacrifices of Nina Turner and Marcy Kaptur, and I am so so angry! They know what's at stake, and it ain't a glass ceiling.

Glass ceiling never made it to our priority lists. HRC and Nancy and Barbara can feel happy for themselves and celebrate. But inside the abyss are the wide open eyes of recognition. Inside that darkness lies me and Bernie and all of us Berners. Seething. And if this is about the glass ceiling, eff them. I have come to the one thing I cannot move beyond.

This is about a glass ceiling? Speechless. My stomach aches. I am the storm.
***

Check out Ballotpedia's fact-checking project Verbatim. Read Did the media call the Democratic primary too early? and learn more about how the mainstream media is erroneously including superdelegates who do not vote until July 25th in the delegate totals.

The struggle continues, but we should take heart. We have a leader who is on our side and will fight for a future to believe in--for all of us and not just the one percent.

Take your voice and run with it this week. Talk about Bernie Sanders with other voters, and let them know he's still in the race. Don't forget to phonebank/canvass Washington, DC. Bernie knows how folks in the District feel about "taxation without representation" with no representation of their own in Congress. Help him become the voice of those who are voiceless! Feel the Bern, Washingtonians!

Take Your Voice and Run With It!