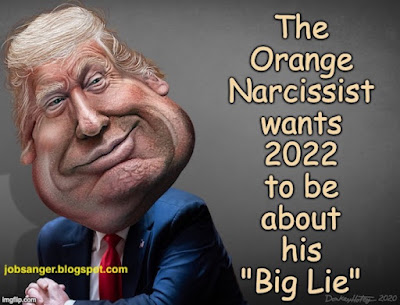 Republican candidates would like for the 2022 election to be about immigration and socialism (Democratic spending to help the working and middle classes). They think those would be good issues for them.

Getting It Wrong, Making It Right: A …
Résumé Red Flags: Post-Pandemic
Joe Exotic Slot – Red Tiger Gaming
Blackjack Facts – Surprising Facts Yo…
iPhone 13 mini — Should There Be One …

You can see that in every rally he has held. While he may mention in passing some other issues, the bulk of what he has to say every time is just more whining about how the 2020 election was stolen from him.

This has most Republican Candidates terrified. If the 2022 election is just another referendum on Donald Trump, many of them will lose, and Democrats will retain control of both the House and Senate. While most of the Republican base loves the Orange Demagogue, most American voters do not. And they would love another chance to send another message to Trump -- that they don't like him, or want him around any more.

The Republicans could have solved this problem after the 2020 election by putting Trump in their rear view mirror and turning to some new leaders -- and that might have given them a good chance in 2022. But they didn't, because they were too afraid of Trump and his supporters. Now they will pay the price for their cowardice.

The 2022 election will be another referendum on Donald Trump, because that's what Trump wants it to be. And that is great for Democrats.

This post first appeared on Jobsanger, please read the originial post: here
People also like
Getting It Wrong, Making It Right: A Call to White Helping Professionals
Résumé Red Flags: Post-Pandemic
Joe Exotic Slot – Red Tiger Gaming
Blackjack Facts – Surprising Facts You Didn’t Already Know about the game
iPhone 13 mini — Should There Be One After the Fate of iPhone 12 mini?
What You Should Know About Disability Laws