All Citizens Should Have The Right To Vote (Even Prisoners) 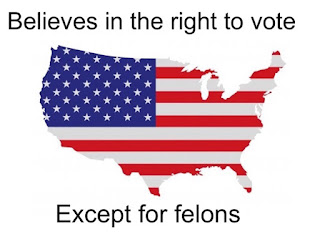 The meme at the right is true in most of this country. When someone in the United States is convicted of a crime, and either imprisoned or placed on probation, they lose their right to vote -- and in some states they can never get that right back. In many others, they can vote again only after finishing their sentence (including any term of probation and parole).

I don't believe this is right. Convicted people don't lose all their rights as a citizen, so why should they lose the right to vote -- one of the most important rights of a citizen in a democracy. These people still live in this country (even while incarcerated) and are subject to its government. They should have the same right to vote as all other citizens.

Here are some thoughts about this from Jamelle Bouie in The New York Times:

Why disenfranchise felons at all? Why not let Prisoners Vote — and give the franchise to the roughly 1.5 million people sitting in federal and state prisons? Why must supposedly universal adult suffrage exclude people convicted of crimes?

John Mcafee: I’m not an anarchist, I’…
Can I tell you the truth?
Beautiful Celebrity Couple Pics
Islamic Art and Islamic Carpets
5 Proven Steps to Online Success in A…
There is precedent for this idea. California allows voting for those in county jails (with limited exceptions). Colorado does too. New York recently allowed those on parole or probation to vote. And two states, Maine and Vermont, already let prisoners vote. In fact, Senator Bernie Sanders of Vermont affirmed his support for voting rights in prison the same week Warren backed automatic enfranchisement for former felons.
“In my state, what we do is separate. You’re paying a price, you committed a crime, you’re in jail. That’s bad,” Sanders said, responding to a question at a town hall. “But you’re still living in American society and you have a right to vote. I believe in that, yes, I do.”
Warren was also asked to weigh on this question, but deferred it, saying only that it’s “something we can have more conversation about.”
We ought to have that conversation now. Americans may see it as common sense that you lose your right to vote when you’re imprisoned, but in many democracies prisoners retain the right to vote. When that right is revoked, it’s only for particular crimes (in Germany, it’s for “targeting” the “democratic order”), and often there is a good deal of judicial discretion. Mandatory disenfranchisement is unusual, and permanent disenfranchisement is even rarer.
Mandatory disenfranchisement is constitutional — the 14th Amendment allows the government to restrict the right to vote because of “participation in rebellion, or other crime” — but there are few good reasons for the practice. The best argument, outside of the case from custom and tradition, is that committing a serious crime voids your right to have a say in the Political process. You lose your liberty — your place in civil society — and the freedoms that come with it.
But doing it that way — subjecting prisoners to a kind of social death — is in conflict with the idea of “inalienable” rights that cannot be curtailed.
As it stands, incarcerated people retain a variety of rights, some of which touch on the political rights and responsibilities of citizenship. Prisoners have freedom of worship. They can protest mistreatment and poor conditions. They can exercise some free speech rights, like writing for newspapers, magazines and other publications. To that point, there is a rich literature of work by incarcerated people tackling complex social and political issues. Voting would be a natural extension of these activities.
An obvious objection is that criminal transgressions render prisoners unfit for participation in democratic society. But there’s nothing about committing a crime, even a serious one, that renders someone incapable of making a considered political choice. Losing your liberty doesn’t mean you’ve lost your capacity to reason. Prisoners are neither more nor less rational than anyone else who is allowed to vote.
If anything, the political system needs the perspectives of prisoners, with their intimate experience of this otherwise opaque part of the state. Their votes might force lawmakers to take a closer look at what happens in these institutions before they spiral into unaccountable violence and abuse.
There are practical benefits as well. Racial disparities in criminal enforcement and sentencing means disenfranchisement falls heaviest on black communities. This is not just a direct blow to prisoners’ electoral power; it also ripples outward, depressing political participation among their friends, families and acquaintances. On the other end, suffrage in prison may help incarcerated people maintain valuable links to their communities, which might smooth the transition process once they’re released.
“Citizenship is not a right that expires upon misbehavior,” Chief Justice Earl Warren wrote for the majority in Trop v. Dulles, a 1958 case dealing with the rights of a military deserter. And, he continued, “citizenship is not lost every time a duty of citizenship is shirked.” Yes, prisoners have committed crimes, and yes, some of those are egregious. But depriving any citizen of the right to vote should be the grave exception, not a routine part of national life. Universal suffrage means universal suffrage.

All Citizens Should Have The Right To Vote (Even Prisoners)