The Republican Tax Reform Was "A Big Fat Failure" 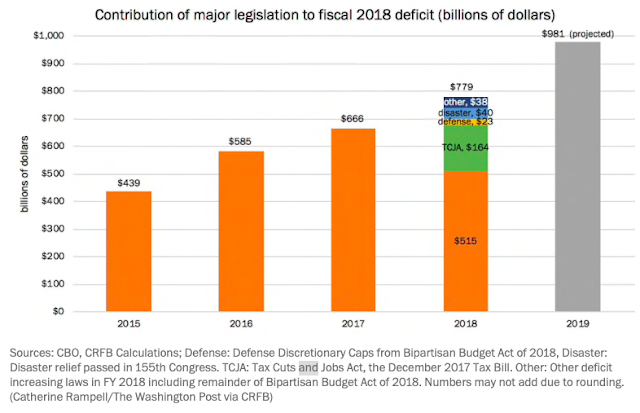 The Republicans made a lot of promises when they passed their tax reform package. None of those promises have come true. It was, to be blunt, an utter failure. It benefitted the rich, but no one else -- and it blew a huge hole in the federal deficit.

Here is how Catherine Rampell describes it in The Washington Post:

The Republican Tax Cut is a big, fat failure.
It has achieved none of the things that Republicans promised it would. It didn’t reduce Deficits. It didn’t target the middle class. And it didn’t win goodwill with voters.

5 Best Payroll Software That Fit Smal…
Cat Coronavirus Diary – Day 4
Good health and fitness is worth figh…
Wuhan Weather Report
7 reasons I’m tired of being tired
Yet, for some reason, President Trump wants to do it all over again . . . in the next nine days, no less.
Last week the Treasury Department reported that the federal budget deficit swelled by 17 percent, or $113 billion, from fiscal 2017 to 2018. This is noteworthy, and not only because Republicans usually claim to despise deficits (at least, they do when Democrats are in charge).
It also reflects a massive decoupling of the business cycle from the federal budget.
Usually, as the economy improves, deficits shrink. That’s because people earn more money, causing them to pay more in taxes and enroll in fewer federal safety-net programs. This relationship between deficits and the economy has generally held true for the past 70 years, except during times of war. . . .
The Treasury numbers should not be surprising, by the way. Literally every independentforecaster predicted that the tax cut would increase deficits on net. Yet Republicans were somehow caught flat-footed by the news.
After all, when the White House published its 2018 fiscal plan a year and a half ago, Trump officials predicted that deficits would shrink substantially in 2018, thanks both to his tax cuts and the Miracle-Gro that Trump was supposedly sprinkling across the economy.
Yet in the end, the deficit was almost twice what the White House estimated it would be: $779 billion, compared with the forecast $440 billion.
Almost immediately after the Treasury report broke, GOP finger-pointing began. Trump said the widening deficit wasn’t his fault; his love of the military, whose budget he had increased, was to blame.
As were all those pesky natural disasters, whose victims he would prefer to let fend for themselves.
“We also have tremendous numbers with regard to hurricanes and fires and the tremendous forest fires all over,” he said. “California does a horrible job maintaining their forests. They’re going to have to start doing a better job or we’re not going to be paying them.”
Senate Majority Leader Mitch McConnell (R-Ky.) instead blamed entitlements such as Medicare. To be sure, entitlement spending is on an unsustainable growth path. But long-run entitlement spending growth is not the reason the federal deficit spiked 17 percent last year.
So what did drive that increase?
The Committee for a Responsible Federal Budget has helpfully broken down the causes. It found that absent any of the legislative changes made over the past year — under unified Republican control of government — deficits would have indeed fallen.
Far and away the biggest contributor to the deficit increase was the GOP tax cut, which cost Uncle Sam an estimated $164 billion. . . .
“It’s a middle-class bill,” Trump promised his supporters last year.
Yet two-thirds of the law’s benefits went to the top income quintile this past year, according to estimates from the Tax Policy Center. And because of the way the law is structured, the share accruing to the richest Americans will only grow in the years ahead.
Americans have figured this out, too.
As poll after poll shows, they dislike the bill and (correctly) perceive it as a giveaway to corporations and the rich. No wonder, then, that Republicans have effectively stoppedrunning campaign ads about their one and only major legislative achievement.
Despite all this, Trump declared over the weekend that Republicans planned to implement a “very major tax cut” before November — even though (oops!) Congress is out of session until after the midterms. Trump emphasized that the tax cut would be “not for business at all. For middle-income people.”
Second verse, same as the first. As voters have learned, this song has gotten very, very old.

The Republican Tax Reform Was "A Big Fat Failure"