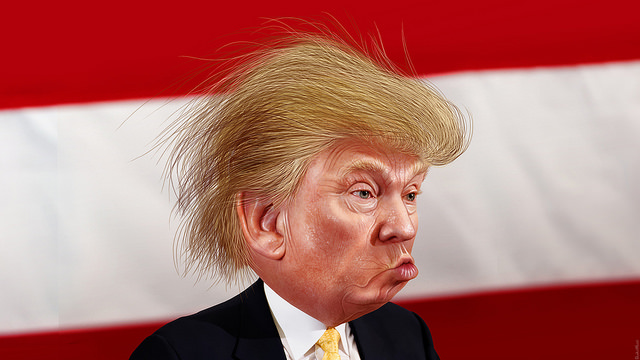 (Caricature of Donald Trump is by DonkeyHotey.)

Donald Trump has won the presidency. That is not a good thing. It means:

Xenophobia has won.
Racism has won.
Misogyny has won.
Religious bigotry has won.
Hatred and division have won.

And Putin has won.

This used to be a melting pot country. That is no longer true. Those who would divide us have won the day, and the biggest culprits are white voters. They have shown that they don't want a country where everyone is equal. They want their white privilege back, and they have elected a president they think will do that. I have never been more ashamed of my race (that majority of whites that oppose equality and praise hate).

The economy is also a big loser. Trump is a believer in the failed "trickle-down" policies of Reagan-Bush. He will give the rich and the corporations massive tax breaks while cutting necessary programs for the poor and working classes. He has said that will produce massive growth and job creation. It won't. It will destroy the economy and balloon the deficit and the national debt.

I have never been more afraid for this country.