1989: The Fan District's Goddess of Democracy 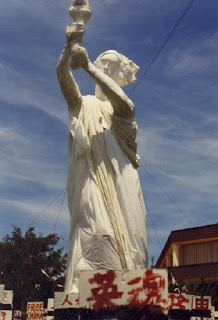 May 30, 1989: As a symbol of their call for democratic reforms in China, the original Goddess of Democracy was built by art students who erected it in Tiananmen Square. The gathering protest on that site had begun in mid-April; tension was mounting.

Subsequently, on June 4, following orders, elements of the People’s Liberation Army put an end to the demonstration. Mayhem ensued. Although reports varied widely, hundreds, if not thousands, were killed.

Made of chicken wire and plaster the Goddess was destroyed during the brutal routing of the determined protesters who had remained to the end, in defiance. As the drama played out on television, via satellite, those events shocked the world.

In Richmond, as their art student counterparts in China were being murdered in the shadow of their 33-foot-tall sculpture, a group of local artists heard the call of inspiration to stand in support of those who had fallen. The impromptu team of the willing and able,  VCU-affiliated artists, worked for the next couple of days to give form to their tribute to courage -- the courage of those who had risked it all for the sake of freedom of expression.

While the ad hoc undertaking was not sponsored by the university, wisely, VCU didn't play it safe and discourage the gesture. Maybe the university's top dogs decided that it was a natural outgrowth from having a world class art school. Richmond’s Goddess of Democracy (pictured above and below) stood the same height and was made of the same basic materials as the one in China had been. Thirty-two years ago, facing the 900 block of West Main Street, it stood as a memorial for about a month in front of the student center. Eventually, weather was its undoing.

While it stood CNN had a report on it, as did many other news agencies. Its image was on front pages of newspapers all over the world. 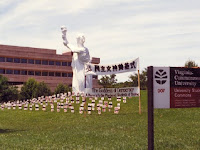 The June 16 -30, 1989 issue of SLANT ran a story about construction and display of the Goddess. It included mention of a handbill that I found posted at the site of the VCU memorial. Here's a portion of the text that appeared on that small poster:

On May 13, 1989, Beijing University students began an occupation of Tiananmen Square to call for democratic reforms and an end to official corruption. The ensuing peaceful and often festive protest drew world attention and gained support from the citizens and workers of Beijing. On Sunday, June 4, at 3:30 [a.m.] Chinese time, troops of the 27th Division of the People’s Liberation Army entered the square with orders to disperse the students. At approximately 6 a.m. these same troops attacked the protestors with automatic weapons, tanks, and bayonets. According to government estimates only 300 students were killed, but local medical estimates put the death toll between 500 and 1,000.

The brutal suppression of unarmed students by a powerful totalitarian government has moved the world’s conscience. Many of the Tiananmen victims were art students who aspired to same basic freedoms which we enjoy daily. As American artists we cannot overlook, and we must never forget, the suffering and sacrifice of our brothers and sisters in Beijing. Their peaceful struggle was a cry for human rights everywhere, and their symbol, the Goddess of Democracy, was the highest artistic tribute they could pay to humanity’s noblest ideal -- freedom.

The little red-on-white placards on sticks that surrounded the sculpture (seen in the photos) were added a few days after the Fan District's Goddess was completed. To say the piece was thought-provoking is quite an understatement. As far as I know, nobody made a penny out of it.
Thinking back on it, this episode was also a good illustration of how the traditional left and right, liberal and conservative, characterizations of all things political don’t always do justice to the truth of a given situation. For instance, was the stubborn and heavy-handed Chinese government situated to the right, or to the left, of the upstart students calling for reform?

When communists are the conservatives clinging to the old way, how does that play out on a straight line spectrum of left-to-right thinking? It seems authoritarian regimes are what they are, regardless of how else they wish to be viewed from the outside.
Until what happened to the Robert E. Lee Monument in 2020, the Goddess of Democracy on VCU’s campus in the early-summer of 1989 was the most successful piece of guerilla art this scribbler had ever seen firsthand. Both happened in my neighborhood, the Fan.
-- 30 --
-- Photos by F.T. Rea

1989: The Fan District's Goddess of Democracy