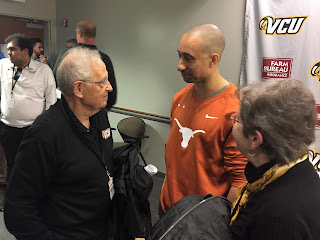 Tues., Dec. 5, 2017: It was the 105th consecutive sell-out crowd for the home-standing VCU Rams. ESPN was in the house, so a national television audience had also watched the Texas Longhorns build a 19-point lead with 11:59 left in the game.

Then VCU went on a run and there were moments it got as loud as I've heard it at the Siegel Center. OK, maybe it was louder when the Rams beat the Louisville Cardinals, on Nov. 19, 1999, the night the arena opened. I'm not sure.

For the next two-and-a-half minutes neither team scored. Then the visitors pulled ahead and went on to win what was a first class college basketball game. Indeed, both teams left it all on the floor.

The Rams senior forward, Justin Tillman, led all scorers with 22 points. Tillman also grabbed 10 rebounds. Much of the game he was working against Texas forward Mohamed Bamba, the 7-foot-tall freshman phenom with the monster wingspan. Bamba blocked 4 shots, changed several others and got 13 boards to match his 13 points. He is widely expected to be a lottery pick in the next NBA draft.

Anyway, after the game in the media room, it was packed with sports writers, broadcasters and others who have access. Hoops fan Stuart Siegel was there; he frequently is. So were Dr. Eugene Trani (VCU President Emeritus) and his wife, Lois. VCU's Coach Mike Rhoades faced the assembled press. He did his usual fine job of handling the ordeal.

After Rhoades cleared out, Shaka Smart sat in the hot seat. Early on he had to say, "This is a special place to play a basketball game." He seemed tired. 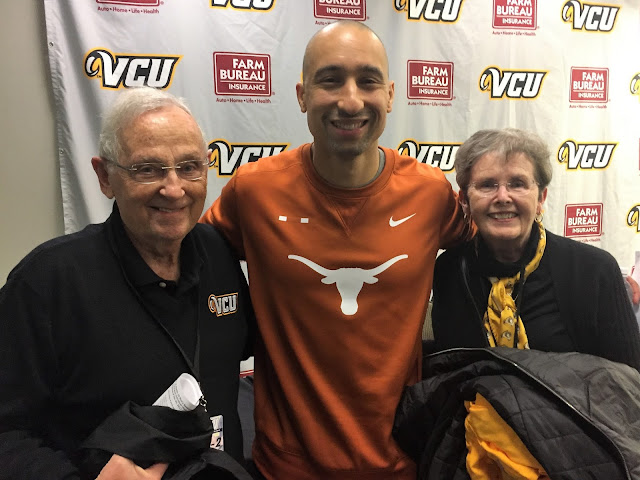 When Smart was through answering questions the reporters started to pack up and leave. Dr. Trani approached Smart and the two had a warm but brief conversation. So I snapped a quick shot of them with my cell phone. Then Trani asked me to take a photo of the three of them. I was happy to document the moment.