The Race For Silver

Paisley (all ‘winnable’ with a swing to Labour of under 1%) being the top 5.  Instead, thanks to the near collapse in the Scottish Labour infrastructure & support post referendum, it will be the SNP who will be eying up further gains in the upcoming Holyrood election.  Top of their list will be East Lothian (Iain Gray’s seat), Greenock & Inverclyde, Edinburgh North and Motherwell & Wishaw.  Seats the SNP ‘just’ missed out on five years ago. 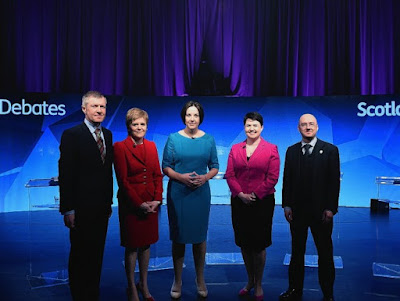 With the first full week of the Campaign ahead, it is to no ones surprise that tax is at the front and centre of the campaign. It featured heavily in the BBC debate, where all parties contributed to a dull and lifeless debate.  Any spikiness was down entirely to Glen Campbell’s inability to successfully monitor a debate.  David Dimbleby’s successor to the chair of Question Time will surely not be Campbell, as he failed several times to regulate the debate.  I’ve said it before, but BBC Scotland really should attempt to snap up STV’s Bernard Ponsonby.  And lo, as if to prove my point he had a good debate when STV hosted it’s own set piece debate last Tuesday.
The thing that STV did differently was that they had a cross examination section where each leader was cross examined by their fellow leaders.  This was done during the referendum campaign (and possibly during last years Westminster Election), but worked very well here.  For one thing, it was the catalyst for Davidson to have a ropey start to the election campaign.  It gave some respite for Labour’s Dugdale before she carefully inserted her foot into her mouth again over the proposed tax rebate and her voting intentions in any future Independence referendum, and also enabled Sturgeon to get off the back foot.
Firstly, Davidson.  As previously mentioned by Peat Worrier, one well placed and suitably well crafted question by the First Minister destabilised the Tory machine so much that Davidson completed a stinker of a debate.  Even a rejuvenated Dugdale took strips off Davidson for showing her support for the union by posing, Cher style, on a tank.  Her poor week continued into Thursday morning’s big set piece interview on Good Morning Scotland.  Davidson flunked the tax question again and ended the interview doing a Rab C Nesbitt impersonation – “I will tell you this…”.
In contrast, Dugdale didn’t have a bad start, even getting to best Davidson during the STV debate.  That was at least until the weekend when she announced the dropping of the policy of scrapping the rebate part of her scheme for an across the board 1% tax increase. What has put her own side’s back up is the revelation that she would vote for Independence if we voted to exit the EU.  It assumes that the UK will vote to leave the EU (not a certain proposition at this stage) but also smacks of a certain kind of arrogance that puts the EU above the sovereignty of the Scottish people.  Grandees on her own side see this as ‘not being sufficiently pro-Union enough’ and in providing a stick with which to beat Labour with.  This has prompted briefings against Dugdale, yip I know Labour people briefing against their leader.  Shocking.  Especially as Labour are conceivably fighting for their very existence, but there you go.
Meanwhile, what of the current governing party.  In the campaign for a first full term for Nicola Sturgeon, her campaign hasn’t really got going yet.  The SNP have been under pressure for tax proposals that can best be described as conservative.  Tinkering of the Council tax rates, when the scrapping of the Council tax was a manifesto pledge in the 2007 election, and the explicit ruling out of a top rate of 50% has attracted criticism from the Greens & Scottish Labour.  A party that was painting itself as a protector of Scotland from English led austerity is now seen in some quarters as adopting Osborne’s tax policies, that’s an interesting turnaround for the SNP. Yet the only party that can convincingly attack the SNP on this front is the Scottish Greens, who's co-Convenor Patrick Harvie (in my opinion) actually won the STV debate.  It’s this reason why Sturgeon and the SNP haven’t quite got out of second gear with their campaign or media performances yet.
The big surprise so far has been the difficulties so far that the Tories have found themselves in over Tuition Fees and Prescription charges, or as the First Minister calls them – hidden taxes.  The perceived wisdom about this election being a battle for second is what is playing out, with Scottish Labour not quite grasping that this election is conceivably a tipping point for them and the Tories seem intent in not taking their chances.  All the while the SNP are in cruse control with no pressure being put on them.

The Race For Silver