The Turd in the Punchbowl 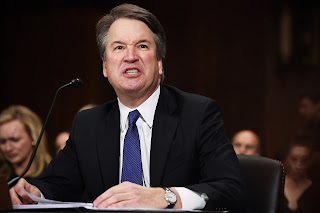 Brett Kavanaugh is sitting on the United States Supreme Court and there is probably a good deal of evidence that will show that this is the last place he needs to be. In fact, he is likely tainted by dark money, the involvement of conservative activist groups, and the filthy machinations of Trump's failed regime:

The Future of Cryptocurrency in India
7 Reasons Why You Should Hire A Femal…
The Edward de Vere Society (EdVS)
A Quiet Coming-Together: Walt Whitma…
Going Bark: A Furry’s Guide to End-to…

Anyone who sat through the extended hearings into the nomination of Brett Kavanaugh to the Supreme Court realized that the whole business was completely off at its center. Christine Blasey Ford was so believable that the blasts of outrage from the likes of Lindsey Graham, and from the nominee himself, smacked of ludicrous overkill, particularly since they had the votes to confirm him unless they found his fingerprints on the Lindbergh baby. When Kavanaugh angrily asked Senator Amy Klobuchar if she’d ever been blackout drunk—even if he didn’t know about her father’s alcoholism—he made Clarence Thomas’ evocation of a “high-tech lynching” sound like calm, reasoned parliamentary rhetoric. He sounded guilty as hell, and even some of the Republicans, especially then-Senator Jeff Flake, suspected the same.

And when the Senate Judiciary Committee ordered up an FBI investigation at the last minute, it seemed like a transparent attempt to run out the clock and, if theNew York Times is correct, it was even more of a bag job than it appeared.

As these facts begin to emerge, there should be a fresh look--and I mean a really, really comprehensive look at Kavanaugh's finances and his voting record. Look at the manner in which he has conducted himself in public. Look at his record and the things he has written. It would appear that much of that was covered up in order to jam him onto the Supreme Court.
Kavanaugh was one of many unforced errors by the GOP during Trump's reign of error. They could have gone with a half dozen other nominees but they burned through all of their credibility and political capital on a drunken frat boy who couldn't stop sexually assaulting women when he wasn't obsessed with getting the Clintons or finding a sugar daddy to pay for the lifestyle he couldn't afford. The mere possibility that there are more people with evidence and credible accounts of their interactions with this flaming sack of shit is enough to make you wonder how much longer he's going to stay on the court.
Trump has all but flushed this turd out of his golden toilet full of grand accomplishments. Kavanaugh couldn't even stay bought long enough to give his benefactor a chance to delay being thrown out of office. The sad energy around these people is so tiresome.
I know that the Democratic Party rarely smells blood and reacts accordingly but I have to hope that Senator Sheldon Whitehouse has decided to hang this idiot out to dry.

The Turd in the Punchbowl