CNN Has Decided to Normalize the Proud Boys 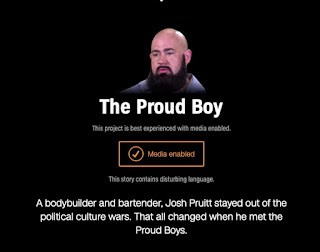 Poor, poor Joshy. He just wanted to fit in and be heard and be like all the other people. And when he joined a Violent, fascist movement called The Proud Boys and went to the United States Capitol on January 6, why, it was all a big misunderstanding! A goof, if you will. And, darn it, he's a white guy so his feelings and his fears and the things he says are all important and we should just let him off the hook for this silliness.

It's pretty jarring to see someone like this treated as a figure of pity. I know CNN is trying to inform us but, wow. This is an extremely violent and unstable hate group they've chosen to highlight. We certainly don't need to see their recruiting numbers go up because someone in the news department said little Joshy should get to tell his story.

No one needs to "understand" the motivations of someone who physically assaults people in order to create chaos and intimidation. They need to go to jail. AndI hope he goes to jail for a very long time.

I hope CNN realizes that, by normalizing these assholes, they're helping to perpetrate violent acts that are going to be carried out against their own employees. Oh, and elected officials. And anyone else the Proud Boys attack in public.

A hamfisted attempt to "hear their side of the story" and show any degree of sympathy or understanding towards anyone--anyone--who would go to the Capitol and assault police officers and try to OVERTHROW THE GOVERNMENT is just a bridge too far.

And if you're stupid enough to think that crying over your "misguided" son is going to get you anywhere, you must be an old white lady who convinced some media hacks to listen to your sob story.

CNN Has Decided to Normalize the Proud Boys