I Voted Early, Now Time For the Election Party 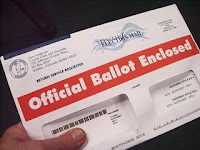 I was able to vote early because Colorado allows us to fill out our ballots and mail them in or drop them off at several collection centers around town. We don't trust the mail, so our ballots were dropped off at the county registrar's office... Now all that's left is to continue watching the craziness of these last few days on television and the results on Nov 8. I hope to have a good cigar and some brandy and get lost in the election ferver, constantly switching between news channels. I used to go to the basement of the county building, where the up to date results from local candidates and ballot measures are posted on chalkboards as they come in from each precinct. It gets very busy with representatives from all parties mingling and slinging bullshit.

I expect Donald Trump to lose, despite the closing gap in the poll numbers. A whole bunch of evangelical preachers have been raising The Donald to a holy level, saying God is intervening against Hillary Clinton because she embodies the spirit of Jezebel. And she's been putting up with this kind of demonization for over 30 years... But ever since Sarah Palin was chosen as a running mate for John McCain, the vitriol and violence and slinging outrageous lies have been getting worse.

The worst part of this election has been watching what a horrible person Donald Trump really is, and his children aren't much better. The thought of Donald Jr, Jeff Sessions, Newt Gingrich, and the flat out nutcase Rudy Guiliani having input into the making of the next government is truly frightening, beyond the fringe of Tea Party frightening.

I expect the Republican Party to either dissolve, or actually reorganize itself into a more inclusive and tolerant political party, with the right wing extremists breaking off to form their own American Patriot party. At Fox News, the contracts for Megan Kelly and Bill O'Reilly will end, and they might choose to move on, Kelly to CNN or MSNBC and O'Reilly to the new network that Trump will begin with the Breitbart web site...

I Voted Early, Now Time For the Election Party