Joe Biden’s official 2020 presidential campaign announcement video features a radical University of Virginia group that calls civility “tyranny” and claims “Cops and the Klan go hand in hand.” The group responded to Biden including its sign in his campaign ad by claiming he is “no better than the white supremacist who terrorized Charlottesville.”

How To Grow Spiritually
Crunchyroll – How to Watch Anime Onli…
How and Why America Was Hit So Hard B…
Social Media Addiction: Issues and 7 …

Biden’s advertisement was largely centered around the 2017 Charlottesville protests. After describing the “Klansmen, and white supremacists, and neo-Nazis” at the rally, Biden said, “[…] They were met by a courageous group of Americans,” while showing a banner reading, “VA Students Act Against White Supremacy”: 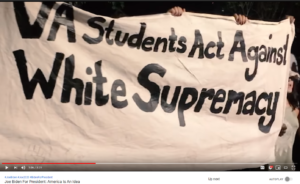 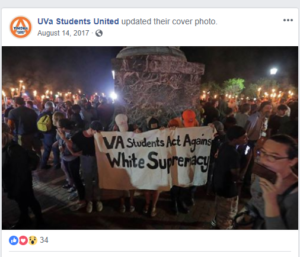 The group also made another post featuring the same image and has used it when advertising events.

The group, however, does not appear to be very active. While it maintains a vocal Twitter presence, UVA Students United held its most recent event in October 2018. It has shared links to events hosted by other groups, however, such as the University Democrats at UVA’s “#ICEOutofCville” event.

UVA Students United’s principles, which are listed on its website, include zero-tolerance assertions:

“Celebrate and center local resistance led by marginalized communities. Honor and celebrate the work led by people of color that has been going on in our communities long before last year’s summer of hate, and de-center whiteness in your organizing.

No “both sides” narrative. Refuse all attempts at moral equivalency between fascists and anti-fascists. The white supremacist fascists have 1) power, and 2) stated intentions towards a white ethno-state, and threaten the existence of all people who are not white, Christian, cisgender, and heterosexual.

Cops and the Klan go hand in hand. Policing is a historically and inherently racist institution, and the police and judicial system protects and legitimizes white supremacy.

Civility is tyranny. No calls for civility or politeness, especially directed towards people of color, who have endured generations of oppression and violence at the hands of the state and complicit white people.”

The pinned post on UVA Students United’s Facebook page again repeats that police officers are no different from the people they oppose: this time, the police are fascists instead of the KKK.

In addition to listing its principles on its website, UVA Students United also has a list of “Demands for your university” that calls for an end to funding the conservative center-right “hate group” Turning Point USA.

Similarly, UVA Students United has a list of principles for “your city or county” that demands the removal of “all Monuments/Flags to the Confederacy/Colonialism and other Racists,” reparations to “every Black family and business driven out of historically Black neighborhoods that have been gentrified,” memorials to police brutality victims, and “No collaboration with ICE.” 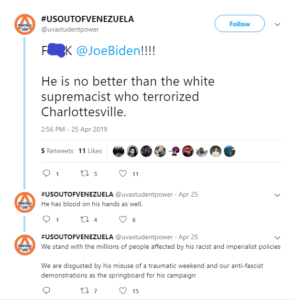 UVA Students United did not respond to the Capital Research Center’s multiple requests for comment at the time of publication.