Sleeping Through The Exercise 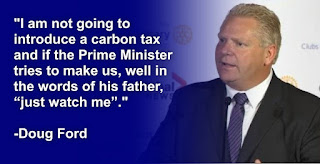 Doug Ford is trying to present a new face to his province. But, Mark Winfield writes, when it comes to the environment, Ford has not changed at all:

This month’s release of the auditor-general’s damming report on the Ford government’s Made-in-Ontario environmental plan left Environment Minister Jeff Yurek calling for “help” in dealing with climate change. But the reality is that on environmental and energy issues, the government remains on the same path of disruption and destruction that defined its first piece of legislation that dismantled the previous government’s climate change strategy.

Rather than changing direction in response to the auditor’s report, the government’s assault on the environment seems to be continuing. Its most recent iteration is Bill 132, a massive omnibus bill ostensibly aimed at reducing “red tape” adopted last week. Buried in its details is an attempt to undo the previous Liberal government’s moratorium on neonicotinoid pesticides, widely identified as posing serious risks to pollinators.

On the environment, Ford wants to turn back the clock:

The province is proposing to move away from the MISA [Municipal-Industrial Strategy for Abatement] program’s province-wide pollution limits for each major industrial sector and return to the pre-MISA model of negotiating pollution limits on a facility-by-facility basis. The underlying goal seems to be to make it easier to authorize increased discharges of both conventional and toxic water pollutants.

He appears to be saying that he understands the results of the last federal election. However, when it comes to the environment, it's clear that he slept through the exercise.

Sleeping Through The Exercise