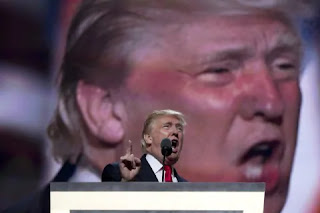 Tom Walkom writes that Donald Trump is desperate to leave his mark:

He wants to be remembered as more than just a crude blowhard with funny hair. All presidents want to leave a legacy. But Trump’s need for acceptance and praise is so achingly obvious as to be almost pitiable.

He is desperate to make a mark. If a hung Congress means he can’t do it the usual way, he will find another.

So if he can't work with Congress, what could he do?  Walkom suggests a couple of strategies:

Expect Trump to focus more on matters over which Congress exercises little control, such as foreign and military affairs.

The president is already saber-rattling against Iran. He has unilaterally pulled out of the nuclear accord with that country and is warning of dire consequences should Iran fail to accede to American demands.

He has also sent U.S. troops to the Mexican border to thwart would-be illegal immigrants from Latin America. As commander-in-chief of the U.S. armed forces, he could make that deployment permanent.

Conversely, he is talking nice to North Korea and has not ruled out inking some kind of peace accord with its leader, Kim Jong Un.

Will he take the even bolder move of negotiating a peace deal with Afghanistan’s Taliban, thus putting an end to America’s longest war? Don’t dismiss the possibility out of hand. The U.S. has been quietly trying to make peace with the Taliban since Barack Obama’s presidency. Trump’s overwhelming vanity might be enough to push this effort to a successful completion.

And then there are those executive orders:

The other broad power a president enjoys is the ability to issue executive orders — legally binding edicts that do not require Congressional approval. Obama made use of this power to bypass a Republican-controlled Congress and impose pollution requirements on the use of coal.

Look for Trump to try something similar in areas that concern him. He has already mused about issuing an executive order that would deny the automatic right of citizenship to any person born in the U.S.

Such a move would be immediately challenged as unconstitutional. But that wouldn’t necessarily prevent Trump from trying it anyway.

Trump knows that Mueller and the Democrats are coming to get him. As his desperation grows, any number of things could happen.