Native American Tribe Reacquires ME Island Stolen Over 100 Years Ago 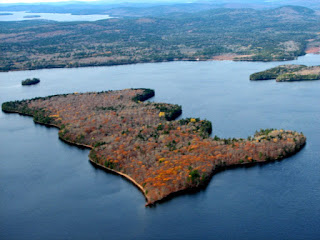 Some Tribes have been able to “Buy Back” their Land once Snatched from them, though even that Win comes with a Legal Caveat in regard to actually being able to Govern the Re-Purched Land, which is certainly a step in the Right Direction.

Albeit an Expensive, Exhausting, and ultimately Unfair Process, in that the Land never should have been Stolen, to begin with.

The Passamaquoddy Tribe, bought back Kuwesuwi Monihq, also known as Pine Island, a 150-acre Island off of Maine, in Big Lake, that holds a Deep History for the Tribe.

Reacquiring Land, that should never have been taken from them, has taken 160 years.

Chief Williams Nicholas said that on the Fourth of July, last summer, he realized the Island had been Listed for Sale for $449,000.

Pine Island was Renamed, White’s Island, on the Listing, but Nicholas recognized it regardless.

“The land was stolen from us and it’s been every chief’s goal ever since to return it,” Nicholas said. The Tribe raised $335,000 after working with First Light, a Collective of Conservation Groups, Timber Companies, Trusts, and Philanthropies Founded in Maine with the intention of Returning Tribal Lands to Rightful Owners.

“This is about keeping our heads down and centering tribal voices,” First Light Member, Peter Forbes, said. “If the land hadn’t been stolen, they wouldn’t need to buy it back in the first place.” In the big picture, this is the Sentiment we should all have when it comes to allyship in general.

“Our concept of land ownership is that nobody ‘owns’ land,” the Tribe’s Historic Preservation Officer, Donald Soctomah, added: “Instead, we have a sacred duty to protect it.” He added that this Process was like “finding a lost relative.”

As Attorney and Tribal Citizen, Michael-Corey Francis Hinton, said the Island was originally used as a place for the Tribe to store Food in Root Cellars. In addition, when European Colonizers brought Smallpox, the Tribe used nearby Space to Quarantine Infected Folks. “Pine Island is a part of that story of survival and resilience,” Hinton said. “We were literally given small pox blankets. … So that’s how this island really took on this really significant, sacred meaning, through survival in a pandemic.”

Hinton said that the Reacquisition of Land is so much more than just a Symbolic Win. “It's a sign of the growing relationship between the tribal community and the conservation community," he said. "This land was so important that after the Passamaquoddy fought in the American Revolution they were told that they could have hunting and fishing rights in perpetuity.”

Native American Tribe Reacquires ME Island Stolen Over 100 Years Ago