Prices and Incomes Policy is an attempt by the government to set the rate of increase of prices and the rate of Wage Increases in the economy .

The government do not seek to control individual prices but control the general rate of increase of prices and incomes. Price and incomes policy may involve ‘voluntary’ agreements  or statutory limits on Wage increases.

Price and incomes policies were adopted in the UK, in different forms, in the 1960s and 1970s, but the stagflation of 1970s left the policies discredited and the policy has generally been abandoned in the UK. In some western European economies, the government may still seek to influence wage negotiations. In Scandanavia, the government has no formal role in wage bargaining, but can exert significant influence in negotiations.

Prices and incomes policies were seen as a solution to excess inflation – especially in a period of high growth. It was hoped that controlling price and wage increases would enable economic growth and low unemployment – without inflation.

Initially, the UK  suggested voluntary limits but in 1966 the government introduced Prices and Incomes orders which could limit price and wage increases by law.

Deal with monopoly power of trade unions. In the 1960s and 70s, trade unions had significant bargaining power and this gave an ability to demand higher wage increases. It was argued that unions could push wages above equilibrium wages and benefit members at the expense of inflation and the unemployed. Also high wage increases limited the scope for firms to invest in capital. For example, Reginald Maudling (Cons. Chancellor 1962-64) said

“The sole and overwhelming reason why an incomes policy is needed is to deal with the monopoly power which the unions now possess…We can endeavour to bring pressure on the unions, though education, persuasion and public opinion, to exercise moderation in their demands; which is what succeeding Conservative administrations have meant by an incomes policy.” Maudling Paper on Incomes Policy, 24/5/76, Cambridge, Churchill Archives Centre, the Thatcher Papers, THCR 2/6/1/158

By the mid 1970s, several economists noted that workers were taking the biggest share of national income ever. For example, between 1950 and 1970, the share of profits in company output had fallen from 25% to 12%, whilst the share of wages had risen from 75% to 87%. This suggested unions were successful in gaining a higher share of national output

Wages increases for firms with monopsony power. On the other hand, workers who do not have collective bargaining strength may find it difficult to get any wage increase – even in a time of inflation. An incomes policy could help this sector of low-paid workers.

Prevent wage-price spiral. If wages increased faster than the previous year, firms will feel the need to pass on price increases to consumers, causing higher inflation. Also, with higher wages, workers have increased nominal income and so demand rises, causing further inflationary pressure. To control prices in the economy, it is felt important to control wage increases.

Create a link between wages and productivity. A fairer method for controlling inflation and setting wages is to try and link wage growth to productivity. This incomes policy aims to overcome the market failure of monopoly power from trade unions (or monopsony power of employers)

Limited ability to control wages. Government efforts to rein in wage increases were only of very limited success. Voluntary agreements were generally ignored and even statutory limits in some sectors made little overall impact on inflation and wage increases.

Trade unions disliked incomes policies They felt that it prevented them from getting higher market wages through collective bargaining. Also, incomes policy has been criticised as being unfair as it is targetted at limiting the wage increase of workers, but not limiting other forms of incomes, such as executive pay, dividends, rentable income e.t.c.

Firms dislike incomes policies as it could be too generous to workers. Also it reduced flexibility for firms. In theory, firms could be fined if they paid workers more than the legal wage rise.

Unfairness. It could be unfair to the lowest paid, who ended up with low wage increases because productivity was hard to increase in that market. In a period of high inflation, wage increases may be insufficient.

High inflation. Empirical evidence shows that inflation was high during 1970s. This inflation was partly due to cost-push factors, out of the control of the government, such as the oil price shock of the 1970s, but even so, the results were tremendously disappointing with evidence that the government was unable to control underlying inflationary pressures in the economy. 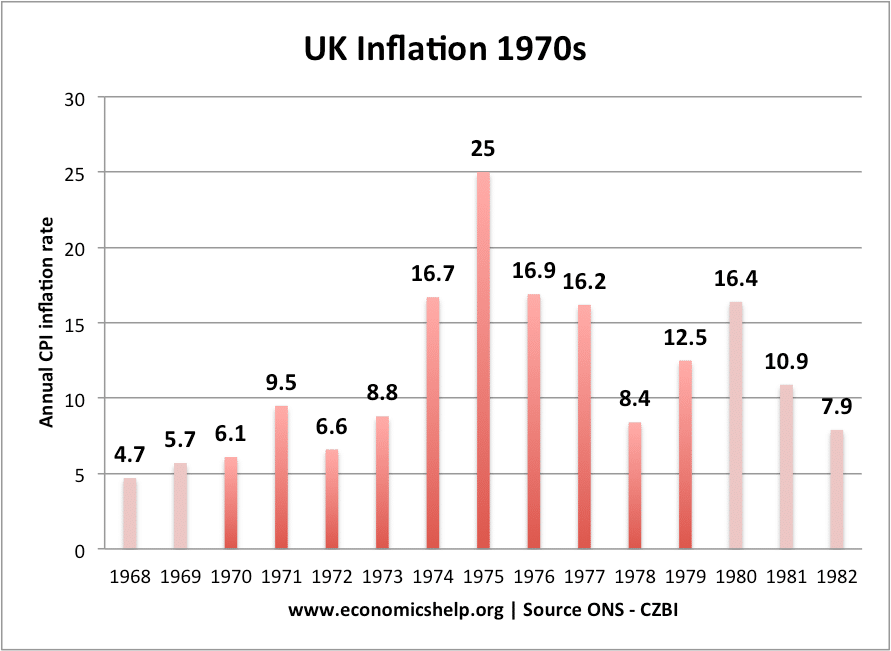 Monetarist critique. The monetarist critique was based on the fact that they felt the underlying cause of inflation was excess growth of the money supply. Therefore trying to control incomes and prices was dealing with the symptoms rather than the cause. If the money supply was growing too fast, then incomes and price policies were like whack a mole. The government could try to stop inflation appearing by forcing wages down, but inflation still kept cropping up elsewhere. Monetarists argued government should leave prices and incomes to the market and concentrate on controlling the growth of the money supply through monetary policy and controls on government spending/budget deficit.

Political criticism. From the early 1970s, an increasing number of Conservative MPs were supportive of the idea that Conservativism was incompatible with such a strong sense of government intervention in the economy. The free market revolution of Milton Friedman and link between economic freedom and political freedom became attractive to politicians such as Keith Joseph, Margaret Thatcher. 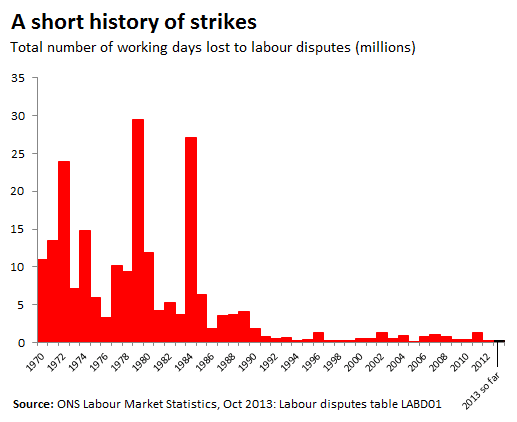