How Trump's Policy Turned a Catastrophe into a Tragedy

Greek tragedies were based on the notion of a dilemma, a character forced to choose between two bad options. Kill your mother or your father. Be sat on by an elephant or eaten by a tiger. Crash the economy or kill millions of people. There is no happy ending in a tragedy.

Right now the US is choosing to crash the economy rather than kill more people. The virus has already cost us trillions in lost equity. It will likely cost us millions in lost jobs. Most of us support that choice but there is another option.

We have this dilemma in part because we don't know who has the virus and so we're acting as if everyone does. Why don't we know? A paucity of testing.

It costs money and takes executive expertise to do this kind of testing and tracking. One of the things that Singapore does is take government seriously; just as in the private sector, they pay some government executives millions and can compete with corporations for the best and brightest. They did extensive testing and tracking of people with the virus and took a very targeted approach.

Michael Lewis's The Fifth Risk may become the source for explaining the deeper cause of why 2020 became a tragedy. Lewis (author of Moneyball, Blind Side, The Undoing Projct and other best sellers) documents how the Trump administration at turns gutted and neglected the various agencies that employed the experts who do things like track hurricanes or nuclear weapons. Trump slashed funding to the Center for Disease Control (CDC), which included eliminating the team responsible for simulating, setting policy for, and coordinating responses to a global pandemic. That cost us in response time and decision quality when this pandemic hit. It's like the difference between calling the fire department that is sitting around the firehouse and waiting for your call and figuring out who could help to fight the fire and where they might find hoses and ladders and how to use them ... while the fire is burning.

Trump has largely replaced any experts who might challenge him with sycophants who only praise him. The World Health Organization (WHO) offered testing kits early on in this pandemic. His administration - biased against anything global - said "No" to this offer and chose to manufacture the kits themselves. Consulting on product development projects, one thing I've learned is that it always takes longer to develop something than you think it will, even if you allow for it taking longer than you think it will. It took longer to create testing capacity than the experts hastily drafted into roles as pandemic response team members hoped. We lost valuable time. And now the virus has spread without check or without good information about where it is. Vietnam - a country with a fraction of our per capita GDP - had conducted more testing than us early on.

How Gender Equity Impacts the Bottom …
Landmark beach Lagos: All you need to…
Can You Open Up to Let God Work His P…
Self Motivation: How to Keep Moving F… 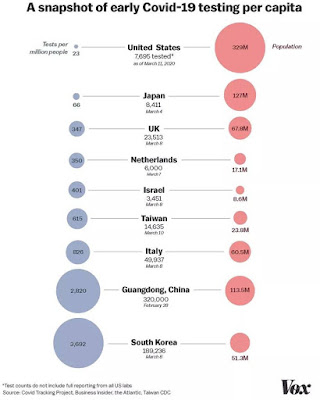 I understand that Singapore is city-state rather than a sprawl of a nation-state spread over a continent. Still, they pulled off this strategy of extensive testing and tracking and have been able to avoid the tragedy we face. They've had no deaths. Schools without cases of the virus are open, as are shops and restaurants. The American disdain for the importance of good people in strong agencies who are not forced to operate in the equivalent of a pop-up store to deal with something of this magnitude is going to cost us dearly, in lives and dollars. It's tragic.
https://www.npr.org/…/singapore-wins-praise-for-its-covid-1…

How Trump's Policy Turned a Catastrophe into a Tragedy