A Chinese recession? A bumbling Fed Chair? A downturn in stocks? Your blogger predicts a 33% chance of bad news for the American economy in 2018.
THE LAST SEVEN YEARS
As we were coming out of the Great Recession, people continued to fixate on threats. When you've been beaten you flinch even when someone raises a hand to wave at you, so this makes sense. The Great Recession was awful and it left people anxious about what might happen next. I've reported it before but it bears repeating: in the decades before and after, the Economy created an average of 2 million new jobs each year: in the oughts, from 2000 to 2009, the economy did not create jobs but rather destroyed an average of 100,000 jobs per year. Rather than create 22 million jobs, that decade destroyed a million jobs. Just consider what a shortfall of 23 million jobs in a decade means for a moment. 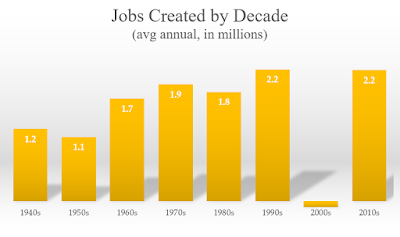 In the 10 months before Nixon resigned in the aftermath of the Watergate scandal, the S and P 500 fell 43%.

NEW FEDERAL RESERVE CHAIRMAN JEROME POWELL
Janet Yellen's replacement as head of the Fed (he'll take over in February) is Jerome Powell. I have two big concerns with him: he has no degree in economics and he will be responsible for tightening monetary policy, a delicate operation that can frighten markets.
Work experience - Powell has served in the Fed for years - helps a great deal when it is business as usual. Theory, though, is essential when things change and unlike Yellen and Bernanke who had studied, researched and published on the topics of recessions and recoveries, Powell has never published anything that would suggest he has thought deeply about these topics. The last Fed Chairman to lack an economics degree served in the 1970s but this disregard for expertise is, of course, characteristic of Trump.
The Fed has announced that it will raise interest rates. If it does this too quickly, it slows down the recovery. If it does this too slowly it fuels an asset bubble and / or inflation. Simply put, money pumped into the system helps encourage "real" economic activity (actual investment, consumer borrowing, and hiring) but also drives up prices. People have argued that since the emergence of the World Trade Organization, it is harder for that money to drive up the price of goods that can be imported but instead drives up the prices of assets like stocks and homes. They argue that loose monetary policy is less likely to drive up the price of apples than it is to drive up the price of Apple stock.
Before the Great Recession, excess reserves in American banks ranged from about $1.5 to $3 billion. As the Fed pumped more money into the economy to counter the credit crash, excess reserves rose to $2.9 trillion, roughly 1,000X more. Yellen has quietly lowered that to $2.3 trillion but there is still a lot of money to pull out of the system. Related, the Fed is finally moving interest rates back up, something that will have a ripple effect on lending and all the hiring, expansion, and spending that accompanies low interest rates.
Unwinding loose monetary policy is somewhat like the game of operation, an attempt to remove something without setting off buzzers that suddenly send markets down or - worst case - cause a contraction in credit and a stutter in hiring or consumer spending. I simply trust a lawyer less than I do academics who have studied these matters extensively. I'd be much more comfortable with Yellen serving another term (as the men have for decades back) than I am with Powell learning this new position during a sensitive time in the transition of monetary policy. He's a risk.
AND FINALLY, CHINA
Ruchir Sharma has been worried about a global recession emanating from China for a year or two. He has a couple of plausible concerns, chief among them the amount of debt China has  recently created.
Sharma cites thirty instances in which private debt over a 5-year period grew faster than GDP by at least 40 points. (Imagine in year 0 that a country's private debt is equal to 100% of of GDP and in year 5 it is equal to 140%.) In each of these cases, GDP growth fell by more than half over the next five years, occasionally slipping into recession. [See page 300-1 of Sharma's The Rise and Fall of Nations] Sharma is worried about China because over the last five years private sector debt as a percentage of GDP has gone up 56.5 points. It could be that China will escape a downturn as it pays down debt but again, 30 of 30 countries have been caught in this.
His other concern has to do with a belief in the way business cycles purge the old and create the new. As mentioned, since the US has become the major economy in roughly 1900, it has had 23 recessions. By contrast, in the quarter century since China has begun its great ascent it has had 0 recessions. None. This is a long time to go without market correction.
My own concern with China has to do with my belief in the progress that communities make through four economies: agricultural, industrial, information and entrepreneurial. China - in my opinion - has successfully made the transition from agricultural to industrial economy. Its per capita GDP is now about $10,000, which is one mark for the transition to a new economy. Curiously, President Xi has recently assumed more power than any leader since Mao and is making sounds of a crackdown on dissent. It seems plausible to create an industrial economy coincident with tight government controls; it seems less plausible to do that with the emergence of an information economy. Simply put, I'm dubious about the compatibility of government control and the emergence of an information economy reliant on knowledge workers who have easy access to information technology and - obviously - information.  I don't know how you create an information economy while limiting access to information.
China has not only emerged as the second biggest economy in the globe but it has accounted for a huge portion of global GDP growth over the last quarter of a century. If it falters, it will have a ripple effect.

Top 10 trends in 2021 for jewellery i…
Afghanistan’s Pivot to Crypto: Will I…
Business Regressing to The Pin Factor…
To Address the Child Care Crisis, Tal…
Building a Talent Pool in a Tight Mar…
Finally, things happen that haven't been predicted. The price of mortgage backed securities suddenly falls. Terrorists fly planes into the World Trade Center. I've listed a variety of triggers for a recession but it could easily be something completely unforeseen that is the trigger.
THE FORECAST
For now I'm keeping my money in stocks until the end of the first quarter of 2018. I think the market will rise another 3% to 8% by May and the unemployment rate will go as low as 3.8%. Home construction will rise, as will business investment.
I'm worried, though, that the the market will turn down about mid-year, as will job creation. The market could finish the year down about 5% to 10% and while unemployment will still be decent (4%? 4.5%?) job creation will turn negative for the first time in nearly 8 years. The total number of jobs created in 2018 will be about 1 million, give or take.
For the year:
S and P 500: down 5 to 10%
Jobs: up 1 million
Unemployment: Roughly unchanged or up slightly to somewhere between 4.0 to 4.5%


This post first appeared on R World, please read the originial post: here
People also like
Top 10 trends in 2021 for jewellery in Australia
Afghanistan’s Pivot to Crypto: Will It Work?
Business Regressing to The Pin Factory Division of Labor
To Address the Child Care Crisis, Talk to Low Wage Moms
Building a Talent Pool in a Tight Market