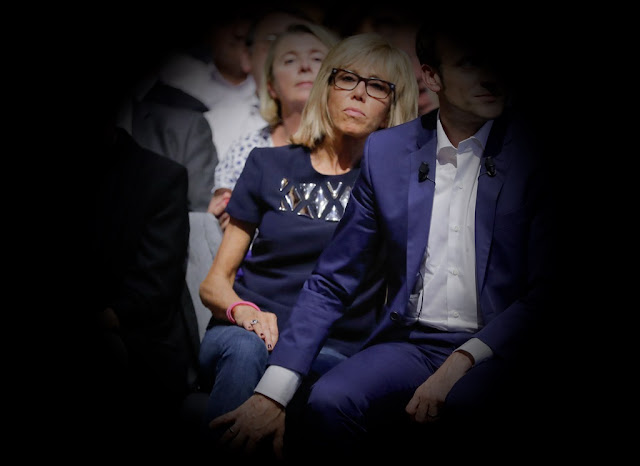 By Lenny Hannah
I definitely do not understand human beings and, although I love the concept of People, they seem strange to me especially when they live a Jacques Brel's “Au suivant” life-style - lately, the whole world has been enveloped by such levels of ambivalence that we feel compelled to meditate upon sheep-behaviour, since it looks like we are living in times where the sheep are the driving force of nations.

Marion Anne Perrine Le Pen is racist, xenophobic, extremist and the mother of all evils just because she wants immigrants to either adjust to France of the Gaul or to go back to whence they came.

Marine Le Pen is an Anti-Semite because she suggested the Jews should leave to their country of origin: the Jewish people should take hid indeed, cause the Ways of the Lord are mysterious. Just remember that you were used for barbecue in Germany and, if I recall correctly, you were warned about what was about to happen and yet you decided that your “whiteness” and your cultural assimilation would save you – well, we all know how well that ended (last Monday, we recalled HaShoah). So, the Jews should just quit their foolishness and remember that G-d moves in mysterious ways.

Marine is an extremist because she defends French Nationalism and doesn't want her country to be Islamised.

Le Pen is the Evil because the International Left decided so, therefore such nonsense is repeated everyday in the mainstream media, in the social media and in protests (carried out by professional rioters sponsored by the Left) all over France.

Suddenly, Mr Macron became the pet of the international arena: he is considered moderate, agglutinating and adorable. Politicians from all spectra recommend voting for the little man, politicians from around the world (even though they are not French) see themselves voting for Macron. Conveniently, Macron is perfect for he is pro-European Union, he is pro-immigration, he wants the French Christians and Muslims to get along, he wants a united France etc, etc...

BS! If I were French I would never vote for a guy who was seduced by his teacher (25 years his senior) and who's convinced he was the one who seduced the cougar. I wouldn't vote for a creature who chose to marry a Puma Concolor just because he doesn't have the capacity, nor the ability, to deal with someone of his own age. The United International Left wants the French to vote for a citizen who insists on romanticising a sordid sexual-predatory tale.

The mercantilist rioters, paid by the united left, are already screaming how extraordinary Macron's old lady is; for after all, behind a great 39 year old kid is a great 64 year old wife: alarming!

A small note: ever since some in the United States produced a theory that vaccines cause autism, there are people in Portugal who decided to follow suit and not vaccinate their children. People, if you want to follow trends just remember that, when there's an epidemic of contagious diseases (like the one we see now in Portugal), please take your children, go live in the caves and live those parents who observe ethics and fulfil their parenting duties alone.

Dear French voters, if Emmanuel were elected we would have the evidence of the theory of the swayed and sheep beast - concocted by the International Left that calls itself agnostic, atheist, and yet loves believing it is omnipotent and omnipresent. Oh-la-la!

(Image: Brigitte Macron [Ed] - Google Images)
[The views expressed in this publication are solely those of the author(s) and do not necessarily reflect the views of Dissecting Society]