Osinbajo Signs 2017 Budget Into Law, After Several Months of Expectations 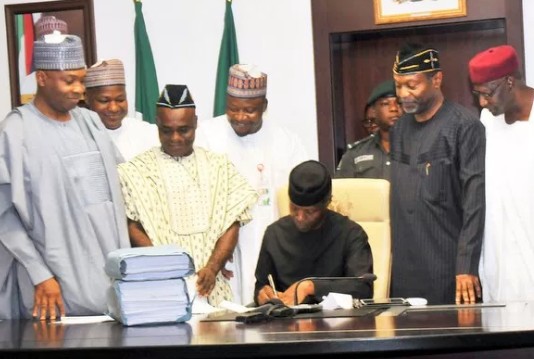 Nigeria's acting president, Yemi Osinbajo, has finally signed the 2017 appropriation budget into law after months of delay. The acting president signed the bill into law in Abuja Monday, June 12, in place of President Buhari Present at the signing of the budget was Bukola Saraki, president of the Senate, his counterpart in the Federal House of Representatives, Yakubu Dogara and a host of others top government officials. The venue for the event was Banquet Hall of the Presidential Villa, Abuja.

“Following the receipt of a full brief on the 2017 appropriation bill as passed by the national assembly, and to buttress the unity at the highest level of government, President Muhammadu Buhari has indicated that it is in the interest of the nation’s economy for the Acting President, Professor Yemi Osinbajo, to sign the appropriation bill into law,” the statement read.

“In a letter dated June 10, 2017, which he personally signed and addressed to the minister of budget and national planning, Senator Udoma Udo Udoma, the president also said he was ‘pleased by the joint resolution that the executive would submit next year’s budget proposals by October 2017 and the national assembly will conclude the appropriation process by December 2017, so that the country can return to a normal fiscal period from next year onwards.”


This post first appeared on MediaCabal, please read the originial post: here
People also like
How Stay Interviews Help Retain Top Talent
Impulse Control Activities For Kids: How To Teach Impulse Control
Qualcomm Unveils Snapdragon 778G- Features Kryo 670 CPU, Adreno 642 GPU, and X53 5G Modem
How To Get Rid of Ticks in the Yard – 8 Steps
5 Unique C-Suite Titles For 2021
Crackpot Cryptography and Security Theater
Self Motivation: How to Keep Moving Forward In Your Career or Business

Osinbajo Signs 2017 Budget Into Law, After Several Months of Expectations