Win with the elements on Fates and Furies slot machine 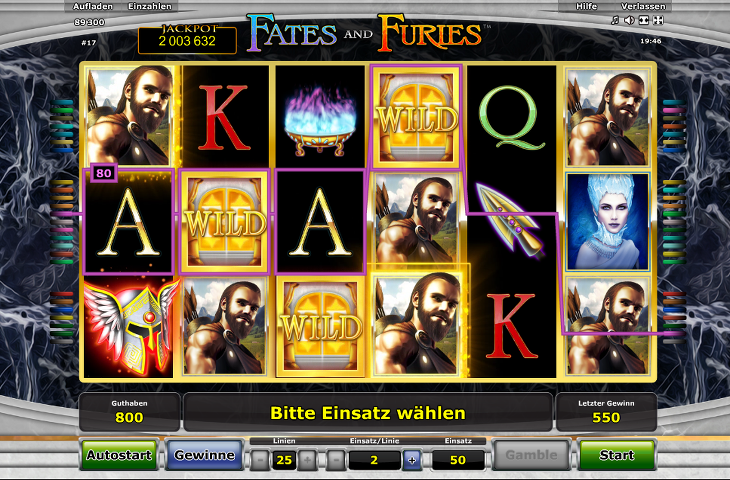 REGISTER NOW AND GET €100 FOR FREE 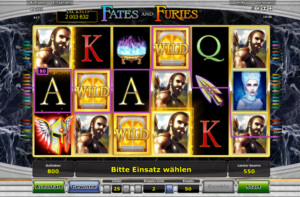 Here is the great opportunity to win big prizes with Fates and Furies slot machine! The classical elements which are originated at the ancient Greece. They thought that earth, fire, wind and water elements describe matter. In this case, on Fates and Furies slot machine, earth, wind, fire and ice will be your ally on your journey to this mysterious world. Are you ready for the fight?

Orion will be your partner in this battle and with the help of the elements, you both will return with a huge amount of loot. 6 reels, 3 rows and 25 lines needs to be explored and fought for. For the biggest loot sack, you need to find 6 identical symbols on the win lines.If you want to go for the jackpot, the blonde-haired Fate symbol should appear on the last reel. It substitutes for all symbols except the one that triggers free spins and the furies. You can see how much you can win above the reels. Just take a look at that number-it’s worth trying Fates and Furies slot, isn’t it?

Fates and Furies slot machine has a Fury feature which activates the furies. The fury needs to appear on the last reel. If the Earth fury appears, the ten, jack and queen symbols will turn into a higher paying symbol. The furies are like the wilds because they substitute for all symbols except other beautiful furies, the fate and the bonus symbols. When the Fire fury appears with her burning hair on reel 6, fire will spread over the reels and transforms random symbols into the gate written FF on it. If you can see the Wind fury on the last reel, the feature will be activated after all wins are paid out. Then the wind will blow and this causes the rearrangement of the symbols. Finally, when the Ice fury appears, pays all line wins first and then all Wilds and Orion symbols will freeze and the reels will start spinning again, twice.

This online slot machine has a Free games feature as well. When its Scatter symbol, the magical portal which is actually a mirror, appears on any position on reels 4, 5 and 6, seven free rounds will be your award. Free spins will come with a random element on  Fates and Furies slot. With the Autoplay feature, the rounds will start automatically. Using autoplay or spinning the reels manually? No matter which one you choose, any method provides entertainment, you will not be bored for sure.

In fact, after a lucky spin, you can play a mini game where you can gamble your actual winning. You will see flashing cards. Choose the correct color (red or black) to double the prize. When you make a wrong decision, the current prize will be lost and you will return to the main game. You can also collect your winning if you don’t want to take a risk. Play Fates and Furies slot machine now and play with real money for more fun and excitement!

The post Win with the elements on Fates and Furies Slot Machine appeared first on .

Win with the elements on Fates and Furies slot machine