High-rolling poker personality Bill Perkins was in the Dominican Republic for poker, sunshine, and fun at the Punta Cana Poker Classic (PCPC) last week. The CEO of the Winning Poker Network, Phil Nagy, was also present, and Phil challenged Bill to a $25,000 heads-up poker match. To the surprise of onlookers, Bill declined to play notwithstanding his reputation as an action gambler who's pretty willing to mix it up for plenty of money when the mood strikes him.

Events unfolded just as the Main Event of the PCPC was concluding at the Melia Caribe Resort on Sunday, October 29. Phil Nagy went over to congratulate the first- and second-place winners, Roberto Carvallo and Jamin Stokes, who had both agreed to a deal that left them each $97,590 richer. Perhaps excited by seeing these enviable sums of money, Phil got it into his head to try to set up a duel against Perkins for $25K. Perkins was at the venue because he was providing commentary for the PCPC. 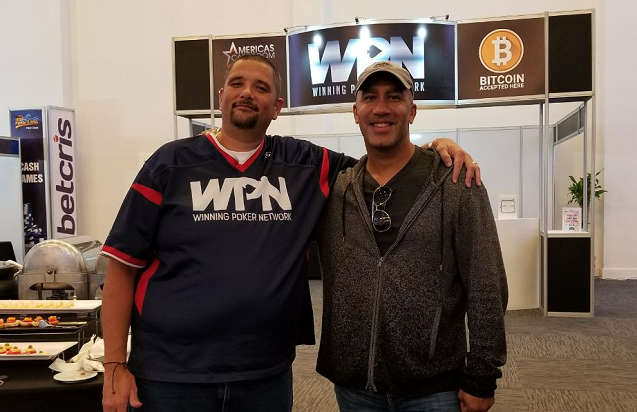 After initially thinking about Phil's offer for a while, Bill Perkins sought him out, and the two men had a hurried discussion. Bill was hesitant, and Phil proposed playing for only $10,000 at that point. Nevertheless, Bill Perkins declined to take Phil up on his offer.

Bill Perkins isn't just some anonymous internet grinder. Rather, the Texan hedge fund manager has made a reputation as a high-living encapsulation of what a poker baller should be. He's known to associate with other prominent figures in the world of poker, like Dan Bilzerian, Antonio Esfandiari, and Jeff Gross.

Some of Perkins' prop bets with these gamblers are legendary. In March 2016, Bilzerian received $600,000 from Perkins after winning a bet involving Dan traveling by bicycle from Las Vegas to Los Angeles within 48 hours. Earlier the same year, Perkins wagered $50,000 with Esfandiari, stipulating that Antonio would have to lunge everywhere he went rather than walking normally. Esfandiari was competing at the PokerStars Carribean Adventure in the Bahamas at that time, and after the arduous exercise of repeatedly lunging, he found his muscles too exhausted to allow him to visit the bathroom during breaks in the tournament. Eventually, he decided to relieve himself into a water bottle at the table instead. When tournament organizers got wind of this, they banned Antonio Esfandiari from the tournament. Antonio won the wager with Perkins although he felt it was proper, given the embarrassing circumstances, to donate the funds to charity.

Bill Perkins has a popular stream on Twitch.tv where he broadcasts his play in big online cash games and tournaments. He sometimes records his adventures aboard the StreamBoat, a private yacht that Bill sails to exotic locales around the world in the company of his friends. 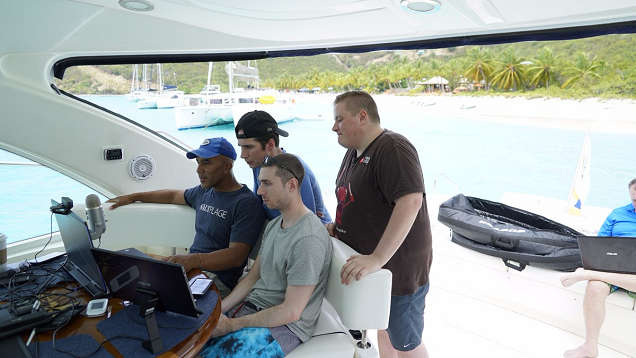 Bill Perkins on the StreamBoat with Jeff Gross, Jamie Staples, and Matt Staples

In February 2017, Bill Perkins and Dan Bilzerian were both banned from Americas Cardroom because Dan was playing from Bill's account, which is multi-accounting and against the rules. The account suspension was shown live on Bill's Twitch stream. Despite the closure of his account, Bill Perkins remains cordial with ACR's head honcho Phil Nagy. Bill and Dan weren't trying to cheat or do anything nefarious, so while they were violating the letter of the law, there was no malice behind their actions. Americas Cardroom is a sponsor of the PCPC, so if there was any bad blood between Phil Nagy and Bill Perkins, it's unlikely that Bill would have been hired to give commentary during the event.

Bill Perkins' failure to meet Phil Nagy's challenge is unexpected given Bill's love of gambling for tens or hundreds of thousands of dollars – often on a whim. It could be that Bill is afraid of Phil's prowess at the tables although this theory falls apart when we consider that word on the street is that Phil is “a terrible fish.” Could it be that Perkins is still a bit sore about the closure of his Americas Cardroom account earlier this year? Well, that might be possible although it doesn't really seem in keeping with his character to hold a grudge for so long about something that was his own fault.

It might be the case that Bill is getting a bit conservative as he ages. His Wikipedia page lists his date of birth as “c. 1969” – as an aside, it's kind of weird that Wiki couldn't find more precise info on this notable individual. Now that he's approaching his 50th birthday, maybe Bill is starting to think of retirement and saving up a nest egg. Or perhaps it was past his bedtime when Phil Nagy made his proposal. Whatever his reasons for leaving Phil hanging, this decision is quite disappointing and not what we would expect from a risk-taker of Bill's mettle.


This post first appeared on Professional Rakeback, please read the originial post: here
People also like
Barcelona plan to offer €9 million in their attempt to sign 27-year-old full-back
6 Brainy Ways to Proceed When You Owe IRS Back Taxes
4 principles for building an MVP even if you can’t write a single line of code
How To Help Your Husband Get On Board With Prepping – Part 2
Brittney Griner's Cannabis Charges In Russia: What's Next For The WNBA Star?