AWS IoT is a managed cloud platform that lets connected devices easily and securely interact with cloud applications and other devices by using the Message Queuing Telemetry Transport (MQTT) protocol, HTTP, and the MQTT over the WebSocket protocol. Every connected device must authenticate to Aws Iot, and AWS IoT must authorize all requests to determine if access to the requested operations or resources is allowed. Until now, AWS IoT has supported two kinds of authentication techniques: the Transport Layer Security (TLS) mutual authentication protocol and the AWS Signature Version 4 algorithm. Callers must possess either an X.509 certificate or AWS security credentials to be able to authenticate their calls. The requests are authorized based on the policies attached to the certificate or the AWS security credentials.

Dead Ends in Cryptanalysis #2: Timing…
Nutritional Tips for Busy Nurses
2021 MacBook Air to Come in iMac Insp…
Have transaction data from all your s…
MICRO BUSINESSES

In this blog post, I explain the AWS IoT custom authorizer design and then demonstrate the end-to-end process of setting up a custom authorizer to authorize an HTTPS over TLS server authentication connection to AWS IoT using a custom authorization token. In this process, you configure an AWS Lambda Function, which will validate the token and provide the policies necessary to control the access privileges on the connection.

Note: This post assumes you are familiar with AWS IoT and AWS Lambda enough to perform steps using the AWS CLI and OpenSSL. Make sure you are running the latest version of the AWS CLI.

Overview of the custom authorizer workflow

The following numbered diagram illustrates the custom authorizer workflow. The diagram is followed by explanations of the steps. 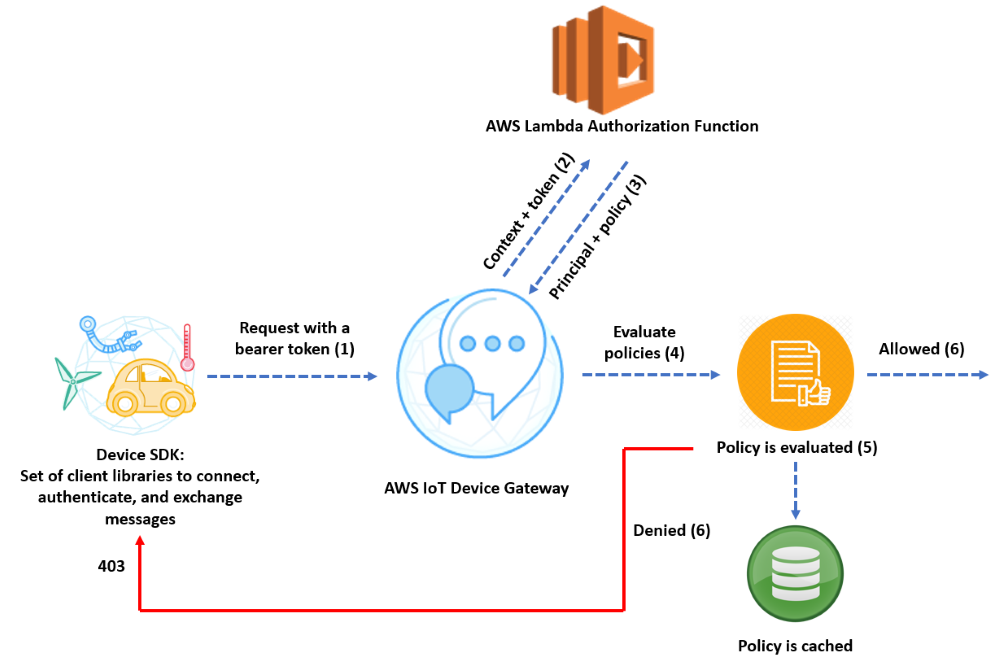 To explain the steps of the workflow as illustrated in the preceding diagram:

Outline of the steps to configure and use the custom authorizer

The following are the steps you will perform as part of the solution:

In this step, I show you how to create a Lambda function that runs your custom authorizer code and returns a set of essential attributes to authorize the request.

Sign in to your AWS account and create from the Lambda console a Lambda function that takes as input an authorization token and performs whichever actions are necessary to validate the token, as shown in the following code example. The output, in JSON format, must contain the following attributes:

The following code example is a Lambda function in Node.js 6.10 that authenticates a token.

The preceding function takes an authorization token and returns an object containing the five attributes (a-e) described earlier in this step.

Run the following command in OpenSSL to create an RSA key pair that will be used to generate a token signature.

Run the following command to create the public key out of the key pair generated in the previous step.

Run the following command in the AWS CLI to create an authorizer.

The following is sample output of the create-authorizer command. It contains the authorizerName and authorizerArn.

The following is sample output of the describe-authorizer command.

You can have multiple authorizers in your account. You can designate one of them as the default so that AWS IoT invokes it if the custom authorization request does not specify an authorizer name. Run the following command in the AWS CLI to designate a default authorizer.

The following is sample output of the set-default-authorizer command. It contains the authorizerName and authorizerArn.

AWS IoT needs to invoke your authorizer Lambda function to evaluate the custom authorizer token. You need to provide AWS IoT appropriate permissions to invoke your Lambda function when a custom authorization request is made. Use the AWS CLI with the AddPermission command to grant the AWS IoT service principal permission to call lambda:InvokeFunction, as shown in the following command.

The following is sample output of the add-permission command.

Note that you are using the precreated AuthorizerArn as the SourceArn while granting the permission. The Lambda function gets triggered only if the source ARN provided by AWS IoT during the invocation matches with the SourceArn that you have given permission. Even if your Lambda function ARN is put in an authorizer owned by someone else, they cannot trigger the function causing illegitimate charge to you.

To verify the configuration, test to see if AWS IoT can invoke the Lambda function and get the correct output. You can do this by using the TestInvokeAuthorizer API. The API takes the following input:

Run the following command in OpenSSL to generate a signature for string, allow.

Run the following command to Base64-encode the string.

Now, run the following command in the AWS CLI to test your authorizer.

You can now make a custom authorization request to the Aws Iot Gateway. Custom authorization is supported for HTTPS over TLS server authentication and MQTT over WebSocket connections. Regardless of the protocol, requests must include the following attributes in the header. Note that supplying these attributes through query parameters is not allowed for security reasons.

Run the following command in the AWS CLI to obtain your AWS account-specific AWS IoT endpoint. See the DescribeEndpoint API documentation for further details. You need to specify the endpoint when making requests to the AWS IoT gateway.

The following is sample output of the describe-endpoint command. It contains the endpointAddress.

Now, make an HTTPS request to the AWS IoT gateway to post a message. You may use your preferred HTTP client for the request. I use curl in the following example, which posts the message, “Hello from custom auth,” to an MQTT topic, customauthtesting, by using the token, allow.

If the command succeeds, you will see the following output.

If you have comments about this blog post, submit them in the “Comments” section below. If you have questions about or issues implementing this solution, start a new thread in the AWS IoT forum.

This post first appeared on AWS Blogs, please read the originial post: here
People also like
Dead Ends in Cryptanalysis #2: Timing Side-Channels
Nutritional Tips for Busy Nurses
2021 MacBook Air to Come in iMac Inspired Colours
Have transaction data from all your sources joined in one place
MICRO BUSINESSES
Best Tips for Living Alone and Being Happy