Lenovo new device with model number K520 has now been Spotted on Geekbench Benchmarks.We can expect it to be next K-series smartphone but not sure about that. 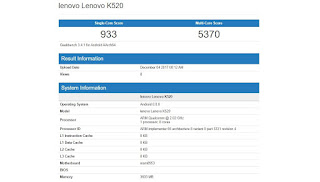 As per listing on GeekBench, the Lenovo K520 is powered by Snapdragon MSM8953 aka SD625 chip clocked at 2.02 GHz coupled with 4GB RAM. It is running on latest Android 8.0 out of the box.