You might have a need to remove Du Quick Charge Lock Screen on Android like I did.

For some weeks now, I've been seeing different Ads pop up on my locked screen with a 'Slide to unlock' message, especially when my internet connection is on.

At first, I didn't give it much thought because it didn't happen frequently.

It got to a point where I got tired of seeing Ads every now and then.

I mean what the heck?

I see a lot of Ads online, but my phone is my personal space, can I just be free of Ads?

Yep, that was definitely a bad day for it to have finally ticked me off.

So, how can you Remove Du Quick Charge Lock Screen on Android if you're currently experiencing this?

The sections below will show you.

What Causes Ads to display on your Android's Lock Screen?

Du Quick Charge Malware/Adware and DU services installed on apps are the culprits. 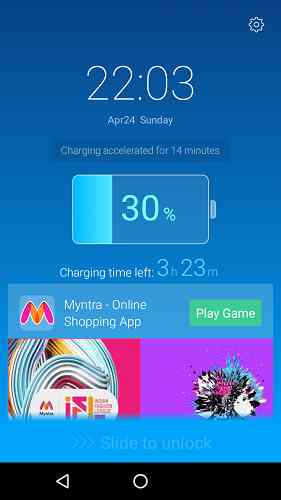 What is DU Quick Charge?

You may be wondering.,

What is DU Quick charge, what does it have to do with the all these Ads I'm seeing, and how can I remove ads on lock screen Android?

DU Quick charge is an Add-on or Extension that comes pre-installed on an app.

Like its name, It claims to improve the speed at which your battery charges especially if your device does not have a fast charging feature.

It is also a charge locker that puts a lock on the screen while your Android is charging.

Since this app cannot be downloaded online,

It is either a Malware that infects other apps or a DU services Adware such as such as DU Battery Boost and DU Speed Charge, employed by Android App developers to earn from their apps by showing Advertisements.

Whether it is a Malware that copies itself automatically on an App or an Adware that has been intentionally installed, when that particular app is on your phone, the effect of the DU Quick charge malware can be seen.

Other than the DU Quick charge made by DU Apps Studio, other Add-ons by the same developer are DU Speed Booster, DU Battery Boost, DU Speed Charge, and DU Boost Charge, each of which performs functions similar to the Du Quick Charge.

A Malware is a malicious software program that causes a Computer, Phone, or Tablet to malfunction.

The effects of DU Quick Charge Malware on Android is not one that calls for forceful action.

This is because it neither corrupts your data files nor steals them, hence it is not entirely malicious.

While these Ads may not be draining much of your battery power and internet data, they can still be a nuisance.

Look at it this way:

You don't benefit while the Add-on is on your phone because the battery life of your smartphone depends on:

Techlass can say, it is how well your device is optimized to manage its battery power.

You're only helping these developers make money off their Apps each time the Ads are viewed or clicked on, whereas you get nothing except a pretty picture to stare at.

If the Advertisement you click on leads you to a site with Malware/Viruses, then you may end up losing your valuable files as well as an Android phone that hangs and lags with time.

Will you like to get rid of intrusive Ads from DU Quick Charge hijacking your Android Lock Screen?

Then here's how to remove DU Quick Charge and turn off Smart Charging.

How to Remove Du Quick Charge Lock Screen on Android

In my own experience while trying to uninstall DU Speed Booster on Android,

I assumed that these Ads were caused by one of the Apps installed on my phone.

But the problem was, I didn't know the particular App that was infected or came pre-installed with DU Services, so I began uninstalling recently downloaded apps from Google Play Store.

Worse, I even installed an Android App Blocker like AdBlock Plus.

Even after uninstalling 4 to 5 Apps, the stubborn Ads kept on showing and I just accepted my fate hoping on whenever I'll get the chance to do a device Backup and then reset my Android to Factory settings.

But the same won't be the case on your own part where you'll have to use Malware removal tools or Android App Blockers.

This is because there is a list of Apps with DU malware pointed out by Spincone, a user on Reddit Forum, as well as those Techlass has garnered from user queries and reviews on the net.

The Apps with DU Quick Charge Malware are:

Having gone through the list of Apps responsible for DU Battery Saver lock screen, you'll realize those essential Android apps like File sharing Apps (Xender), Browsers (UC Browser), Android App lockers, and Rooting apps (App2D) are part of this list.
Some of these Ads are not as a result of the DU Malware, but the Apps come with DU services;

For instance, Xender, ES App Locker, 360 Security, and TouchPal Keyboard.
Does it mean you should remove Xender, ES smart charge, and 360 Security charging screen as well as other Apps given on this list?
Wait a second:
1. If the DU quick charge feature is inbuilt into the app, where it installs a lock screen when a charger is plugged in the case of TouchPal keyboard app.
Then,


You can try this for individual apps first and see if any has a fast charging feature you can disable.

If this step does not still resolve the issue, then you can now proceed on uninstalling malicious apps.

2. If the charging lock screen feature is caused by DU malware in Apps,
Then, you need to uninstall these apps.
Even though it might not be the best thing to do, it is a step in the right direction.
To begin,
If you can't  uninstall the app directly from your phone, then,
Other apps with DU malware include yellow flashlight app, CM Security, Best Me Selfie app.

Either step above will help you remove DU Quick Charge lock screen as well as DU speed booster from Android phone.

Which step worked for you and which app did you have to uninstall to remove this screen locker?

5 Best Android Emulators for PC and Mac 2018
How to install Google Pixel Launcher latest update for any Android device
Google Pixel And Pixel XL Slow Charging Issue Solved
How to Transfer iTunes Music to Android Device
How to Create Recycle Bin on Android Phones
Is Hindi, Oriya, Marathi Typing Possible on Android Phones?
Is It Good to Buy a Phone With Android 5.1.1? in 2018
Help! My Galaxy S6 Won't Turn On