Lee never had the pleasure of seeing Johnny Cash in person.  By the time Lee became a fan, Johnny was too ill to tour and passed away in 2003.  I was looking at Facebook on Friday night and found out there would be a tribute concert at BB Kings on Sunday night.

We arrived at 6 PM when the doors opened and ate dinner before the show began at 7:30.  The opening act was a tribute to country star Waylon Jennings who was a big friend of Johnny Cash.  they both played in a country supergroup called the Highwaymen.  The Johnny Cash impersonator was Johnny Kinniard who played Johnny in the Broadway show Million Dollar Quartet.  He played over 30 songs from all eras of Johnny's career.  He sounded almost exactly the same as Cash, but was wearing a gray suit.  Simon Chardiet, JJ Murphy and Guy Kurshenoff were in the backup band. 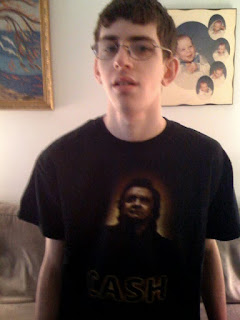