Bob Dylan, Paul Simon and the Jeff Slate Footnote Controversy with My Comments 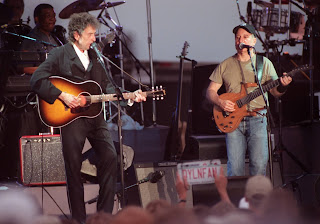 Jeff Slate is a New York City-based songwriter and journalist. His writing can be found in the Wall Street Journal, Esquire and Rolling Stone, among others.   He wrote the liner notes for the Dylan Boxed Set More Blood More Tracks.  At the World of Bob Dylan Symposium in May 2019 which I attended his interview of Roger McGuinn.  He recently raised controversy by stating that Paul Simon will only be a historical footnote to Bob Dylan.

I will list here two comments that I found about this:

Sean Ross is a longtime journalist covering the radio industry for Billboard, R&R and others. He is Edison Research’s Vice President of Music and Programming.  He wrote a columncomparing the radio airplay of Bob Dylan with Paul Simon (with or without Art Garfunkel).  He also states “Paul Simon/Simon & Garfunkel had more and bigger hit singles than Bob Dylan. Simon had 11 songs that made the year-end top 100; Dylan had three. “Knockin’ on Heaven’s Door” didn’t make 1973’s year-end chart.”  Please read the entire column for his insights.

Dan Epstein is an award winning journalist, pop culture historian, and avid baseball fan who has written for Rolling Stone, SPIN, Men’s Journal, the Los Angeles Times, USA Today, MOJO, Guitar World, Revolver, LA Weekly and dozens of other publications.  He wrote an excellent essay in The Forward about this controversy.  I leave it up to my readers to evaluate the details.  He states “Bob Dylan doesn’t need to have his already-vast achievements further burnished by a writer envisioning him as the last man standing amid the fragrant ashes of late 20th century music history. What I find most unpalatable here is the framing of popular music as some kind of zero-sum game, in which there are only winners and losers and only a tiny handful of said winners will ever mean anything in the long run.”

Here is my take on the issue:

I have enjoyed Bob Dylan and Paul Simon (with or without Art Garfunkel) immensely since the 1960s.  I have tons of records, tapes, and CDs by them.  Bob Dylan’s strength is as a song writer which is reflected in his winning the Nobel Prize for Literature. I surmise that many Dylan fans are not interested in him as a musician and do not listen to him on commercial radio.  Paul Simon has had many more 45 RPM hits than Dylan, but Dylan’s albums have had a much greater impact whether or not they hit the charts.  I don’t like the way the Dylan is incommunicative with his fans.  He will rarely talk to his audience at concerts.  Paul Simon, on the other hand, spoke to his audience after every number as his did at Madison Square Garden in September 2018.

Dylan and Simon have great respect for each other as they toured together in 1999.  I enjoyed their concert at Jones Beach that summer.

Decades and even centuries from now there will be writings on the popular music of the late 20th and early 21st centuries.  Only wonderful things will be written about Paul Simon and Bob Dylan.  They have both contributed immensely to our popular culture.  There is no need to quantify their achievements.

I’m a Little Nervous This Morning

Bob Dylan, Paul Simon and the Jeff Slate Footnote Controversy with My Comments