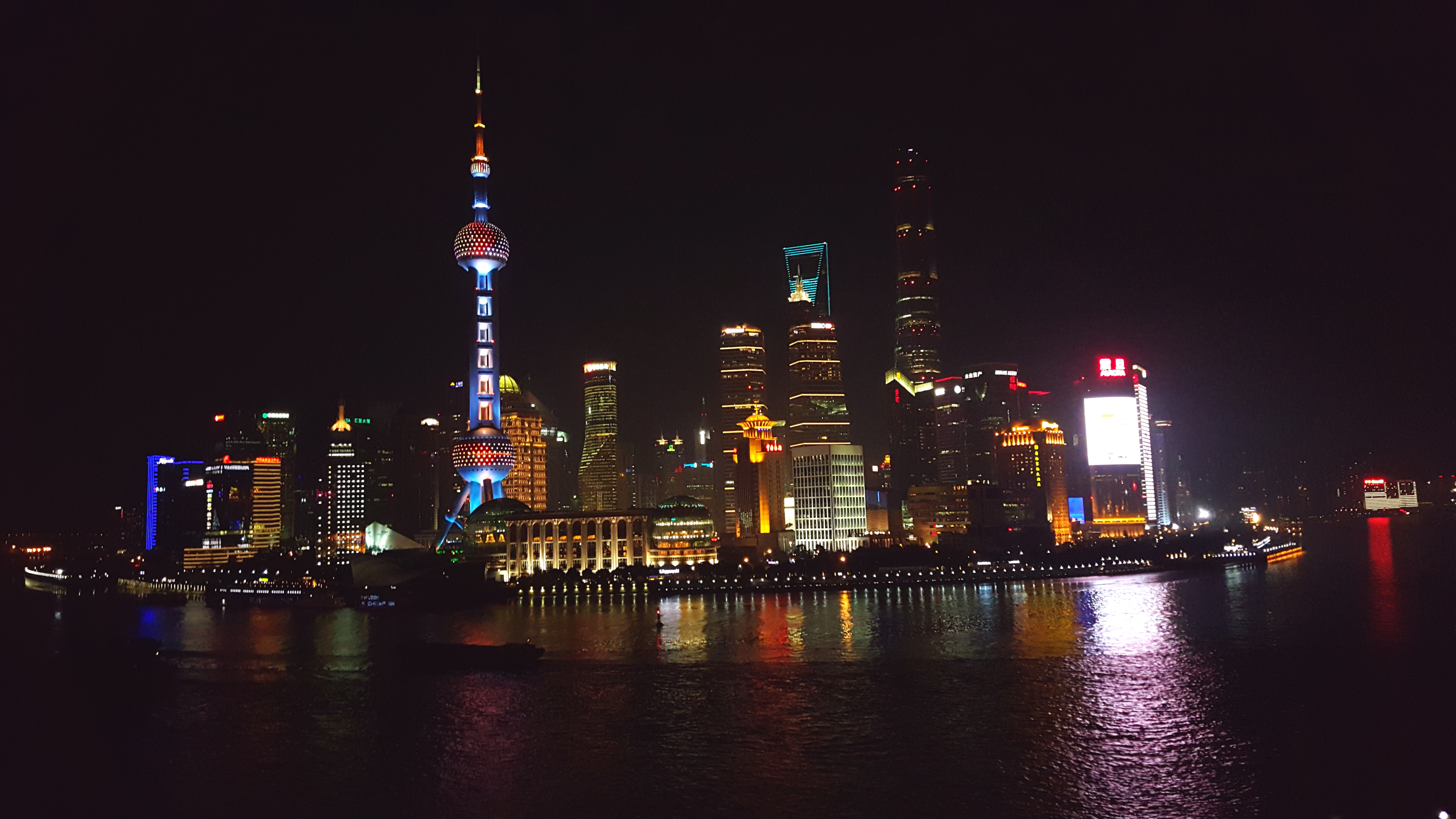 你好！ I spent Christmas in Shanghai last year and prior to that I hadn't visit Shanghai for 16 years. I have relatives there but I was never a frequent Shanghai visitor. I enjoyed Shanghai for it's great food and scenery, this time around I explored places and tried things I didn't last time. We explored this little hipster town called Tian Zi Fang (田子坊) which is like Korea's Hongdae or Hong Kong's Mongkok or Causeway Bay, I was also introduced to this dish called Chuan Chuan Xiang (串串香) which is literally food on skewers dipped or cooked in this spicy soup and of course enjoyed the traditional Shanghai soup dumplings (小笼包).

An Insight Into The Binance – BlockCr…
UNITED KINGDOM - Brink of Brexit
Top 10 Dirtiest Jobs In The World
What’s New On Hulu July 2019
One Punch Man: Road To Hero Revealed …
I packed heaps of heat tech clothes for this trip as I was told Shanghai can get quite chilly but I was lucky and it didn't get that cold at all, I spent a good amount of time walking along Nanjing Road (南京路) in just a pair of heat tech tights, dress, boots and a jacket.  Make sure you pack accordingly if you're going around winter!
I started the trip with some traditional soup dumplings at Nan Xiang Man Tou Dian (南翔馒头店) at Yu Yuan (预园)  in the Cheng Huang Miao (城隍庙) Precinct.
Nan Xiang Man Tou Dian (南翔馒头店)
No.85 Yuyuan Road, Huangpu District
豫园路85号(近城隍庙豫龙坊) 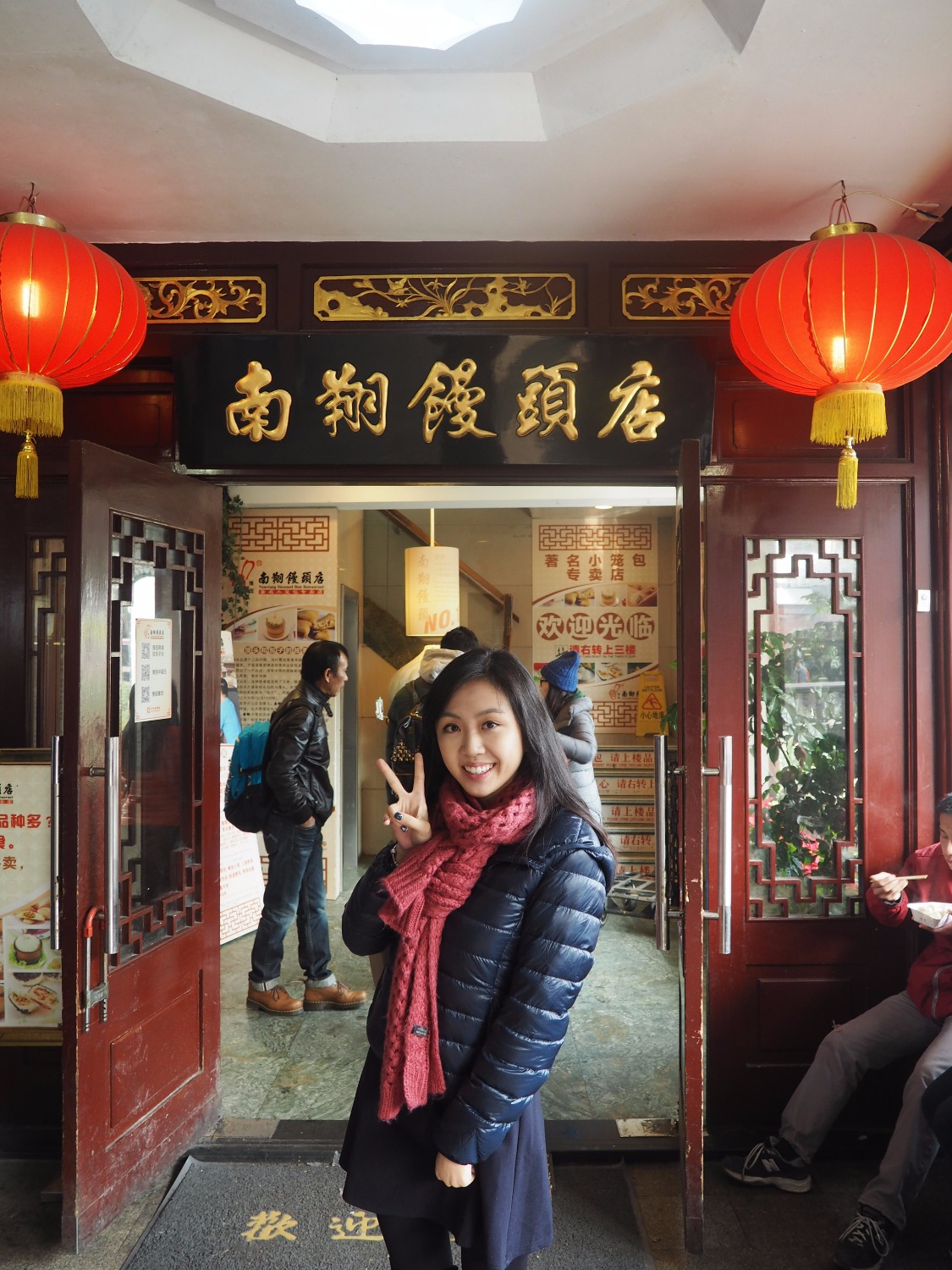 This restaurant has three levels, where the prices of the menu increases as you move up the three floors. This restaurant is well known among locals and tourists, it's also near the Jiuqu Bridge (九曲桥). There are long queues almost immediately from when the doors opens in the morning, most diners queue for take out or the first floor, we didn't want to wait so we proceeded straight to the third floor. 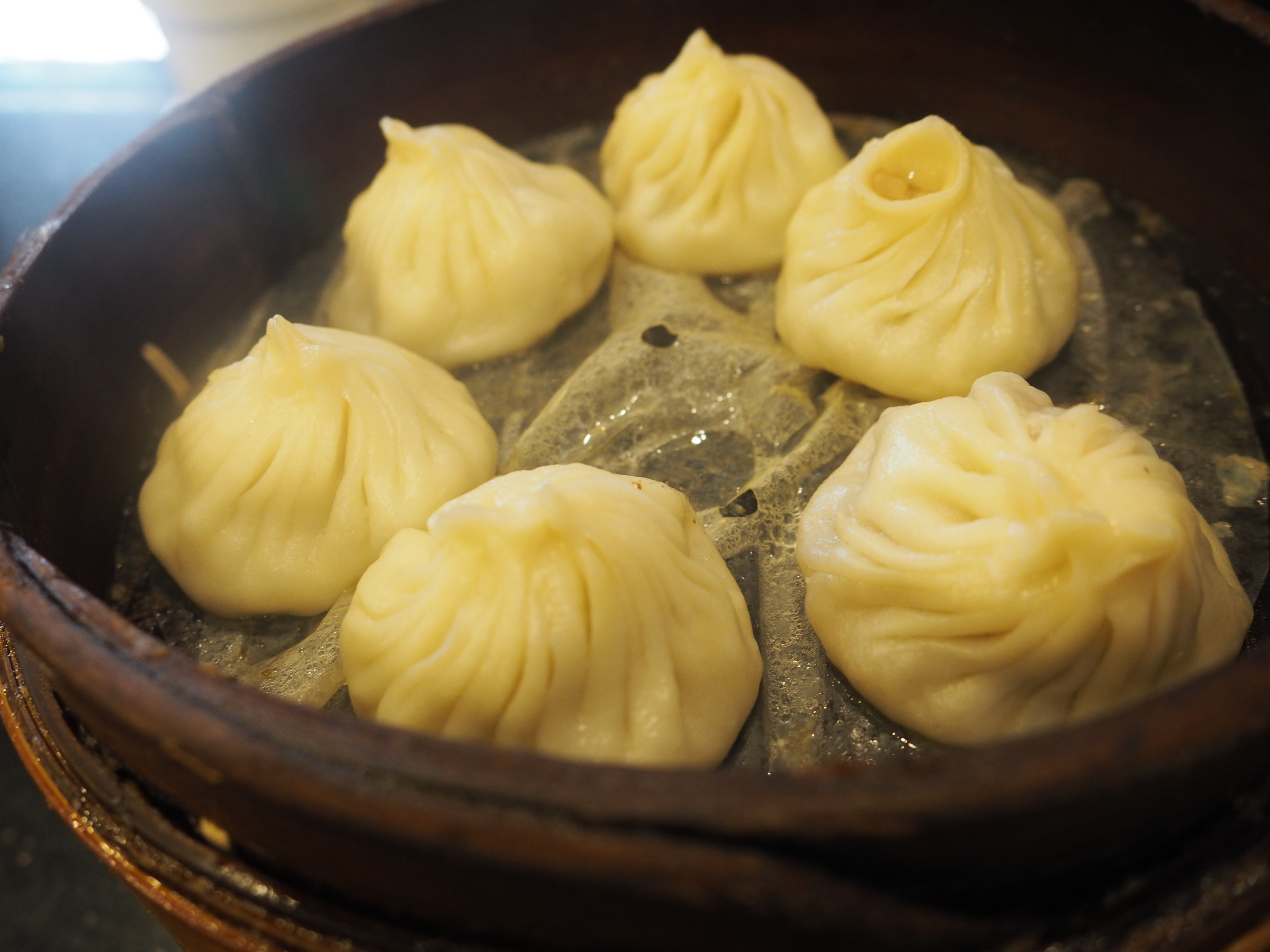 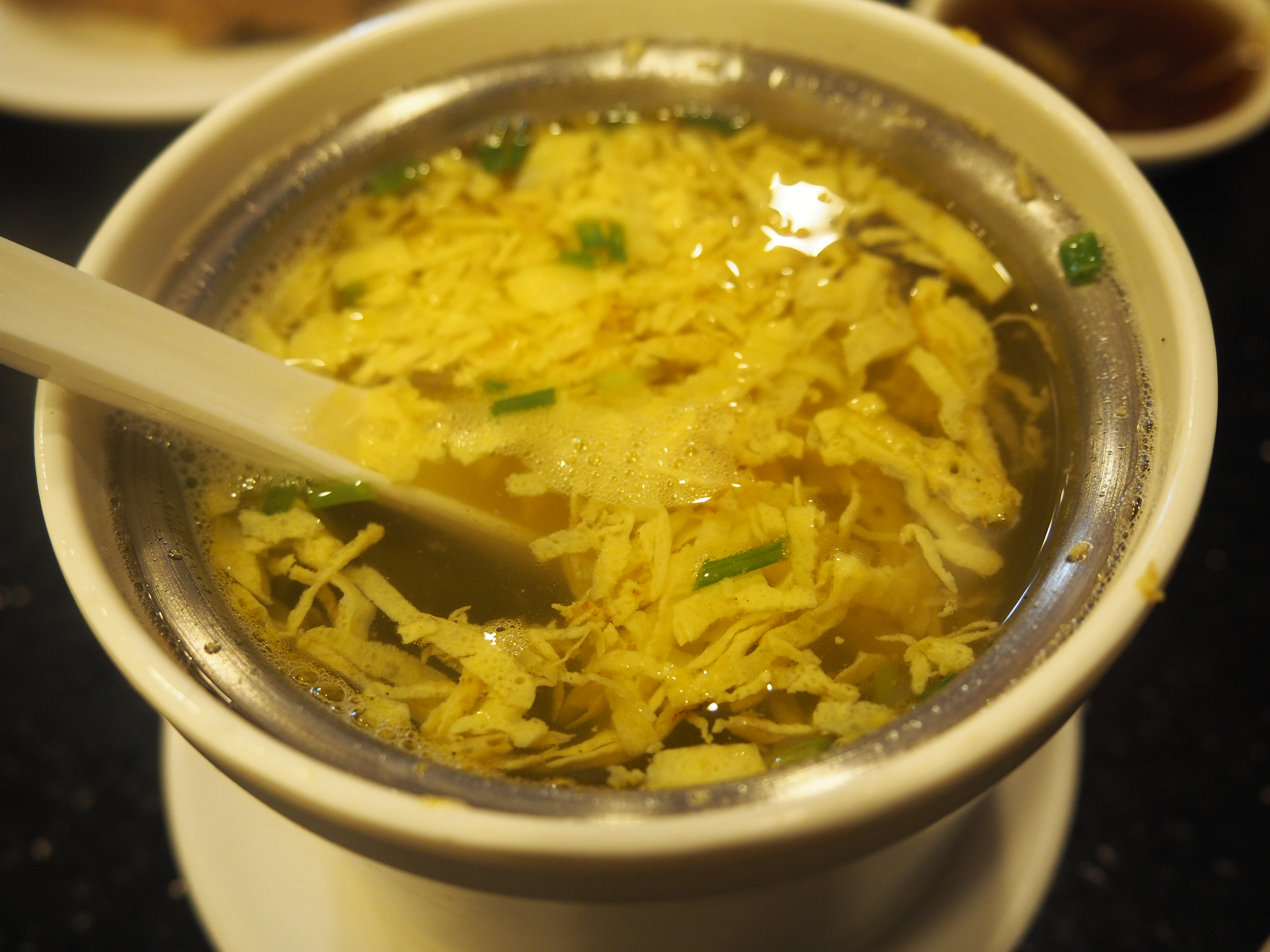 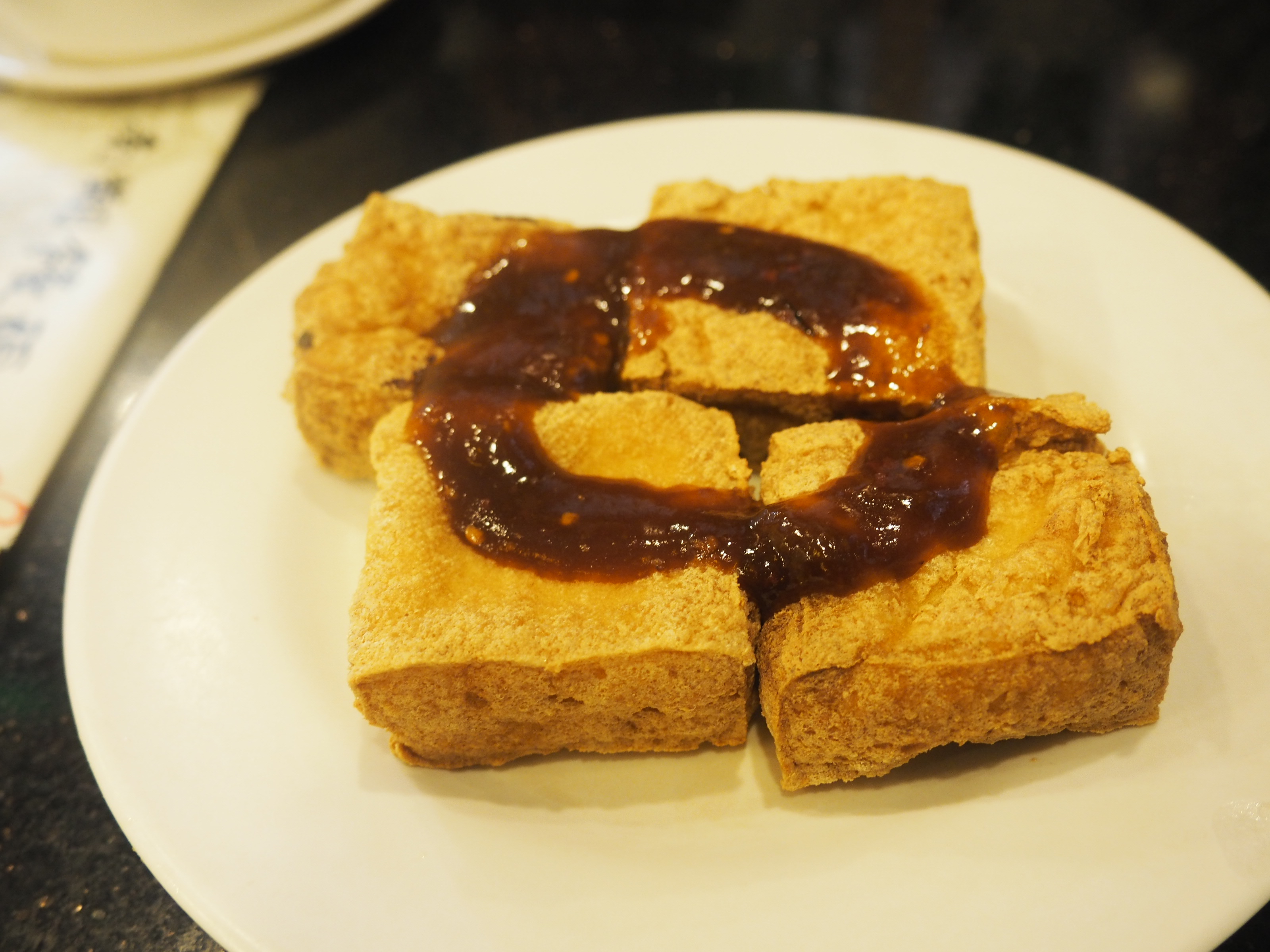 As expected the Xiao Long Bao was fantastic! The skin was thin and not chewy, the soup was hot and the meat was juicy, perfect for cold Shanghai! I could've continued eating these dumplings if I didn't have to save my stomach for other foods to try during the day! The shredded egg soup was quite light, it was a bit like comfort food that you have after a big night out or when you're feeling unwell. Lastly the Smelly Tofu was actually not that Smelly! I'm a huge fan of Smelly Tofu but I didn't dare to eat Smelly Tofu from any random street stores in China so getting Smelly Tofu at this restaurant was the safest option for my stomach. The tofu was dry but the sweet sauce on top balanced it out, it's not the best Smelly Tofu I've had before, I'd say stick to the soup dumplings when you're going to this restaurant!
After our meal we took a nice stroll around the area, looking at some shops, enjoying the culture and architecture. You'll also see other street foods along the way and I couldn't help myself to the sugar coated plums which are also kids' favourites. 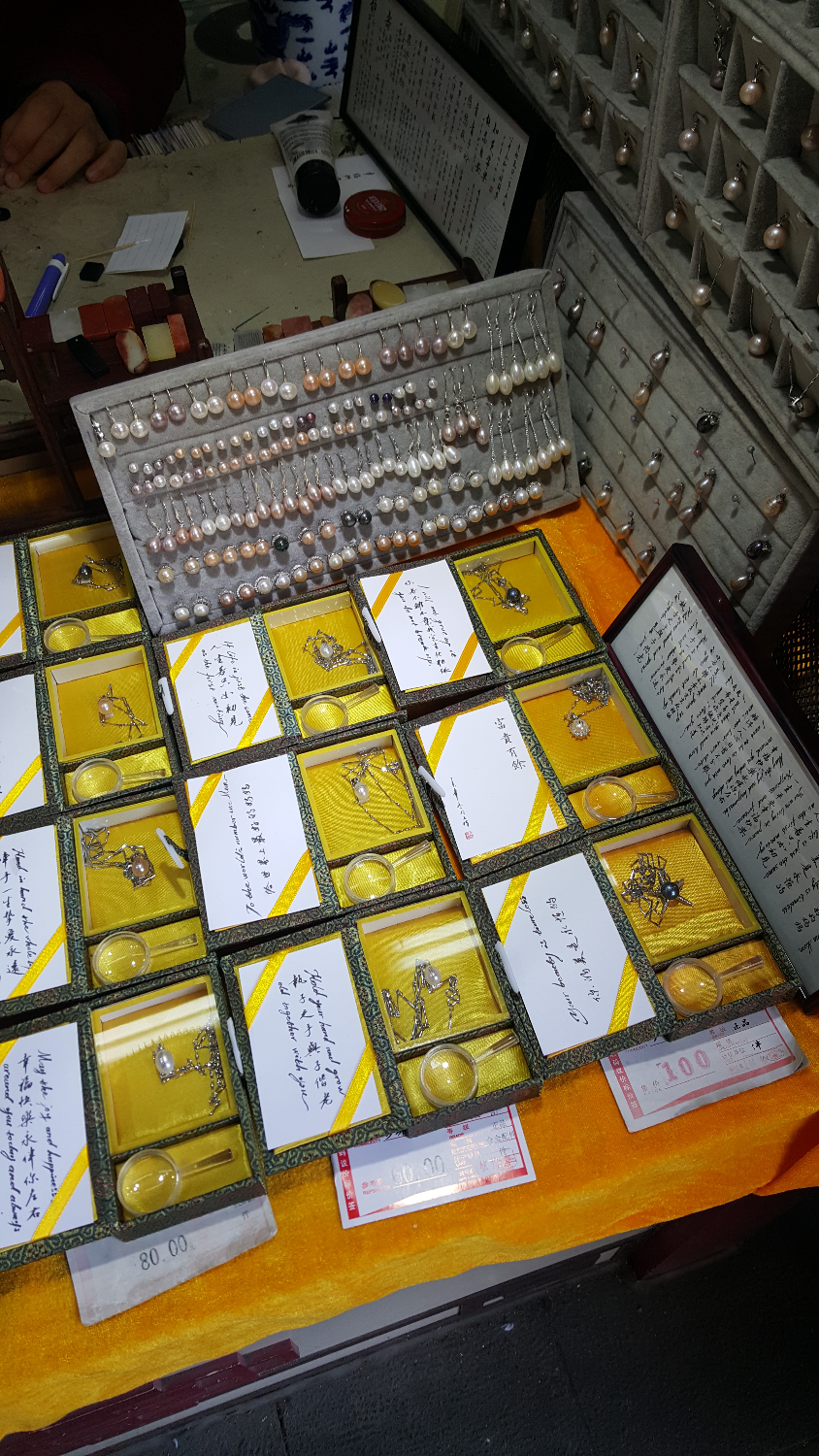 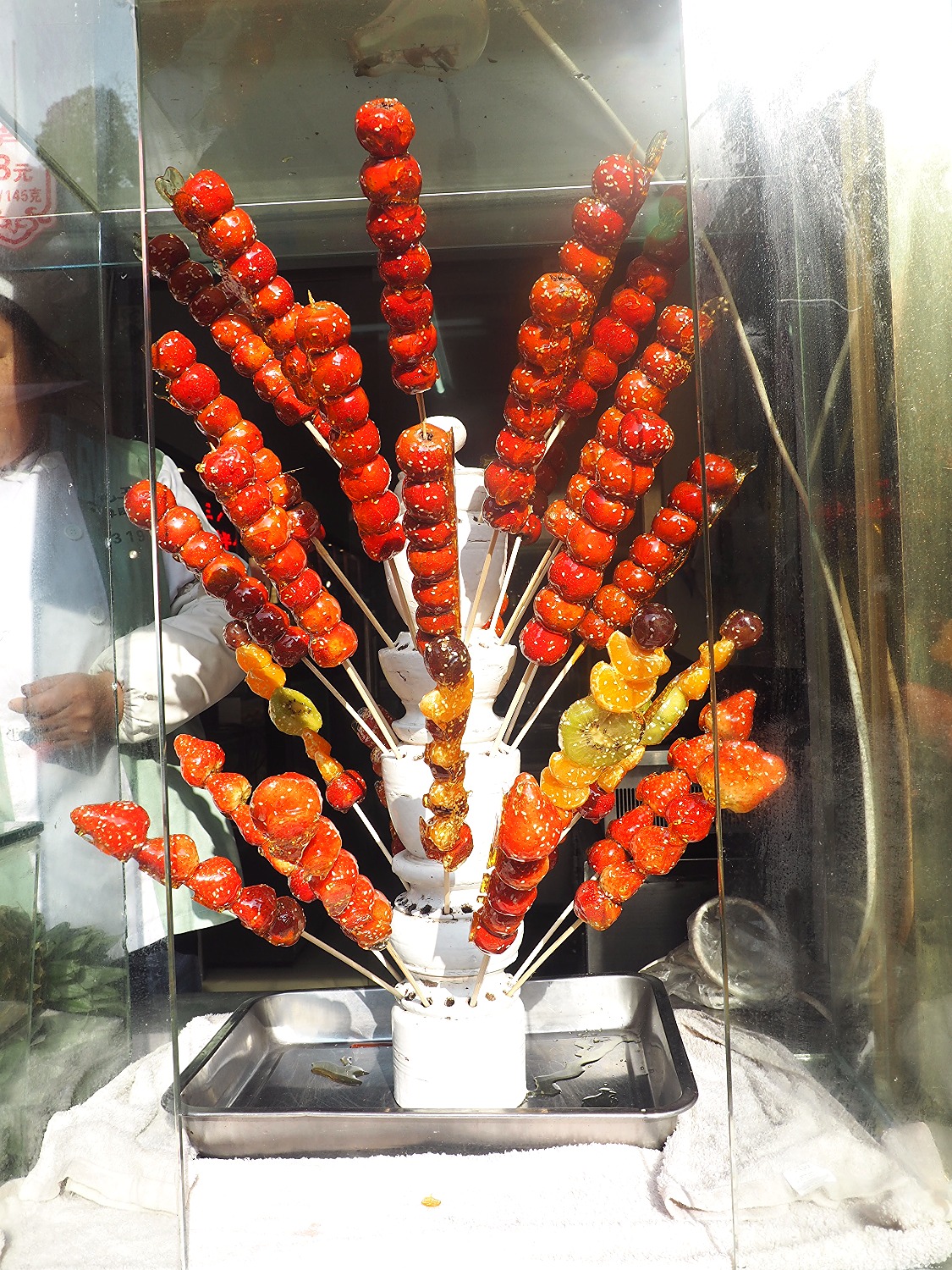 We decided to explore Tian Zi Fang (田子坊)  which is quite a popular destination for youngsters to hang and visit recently. 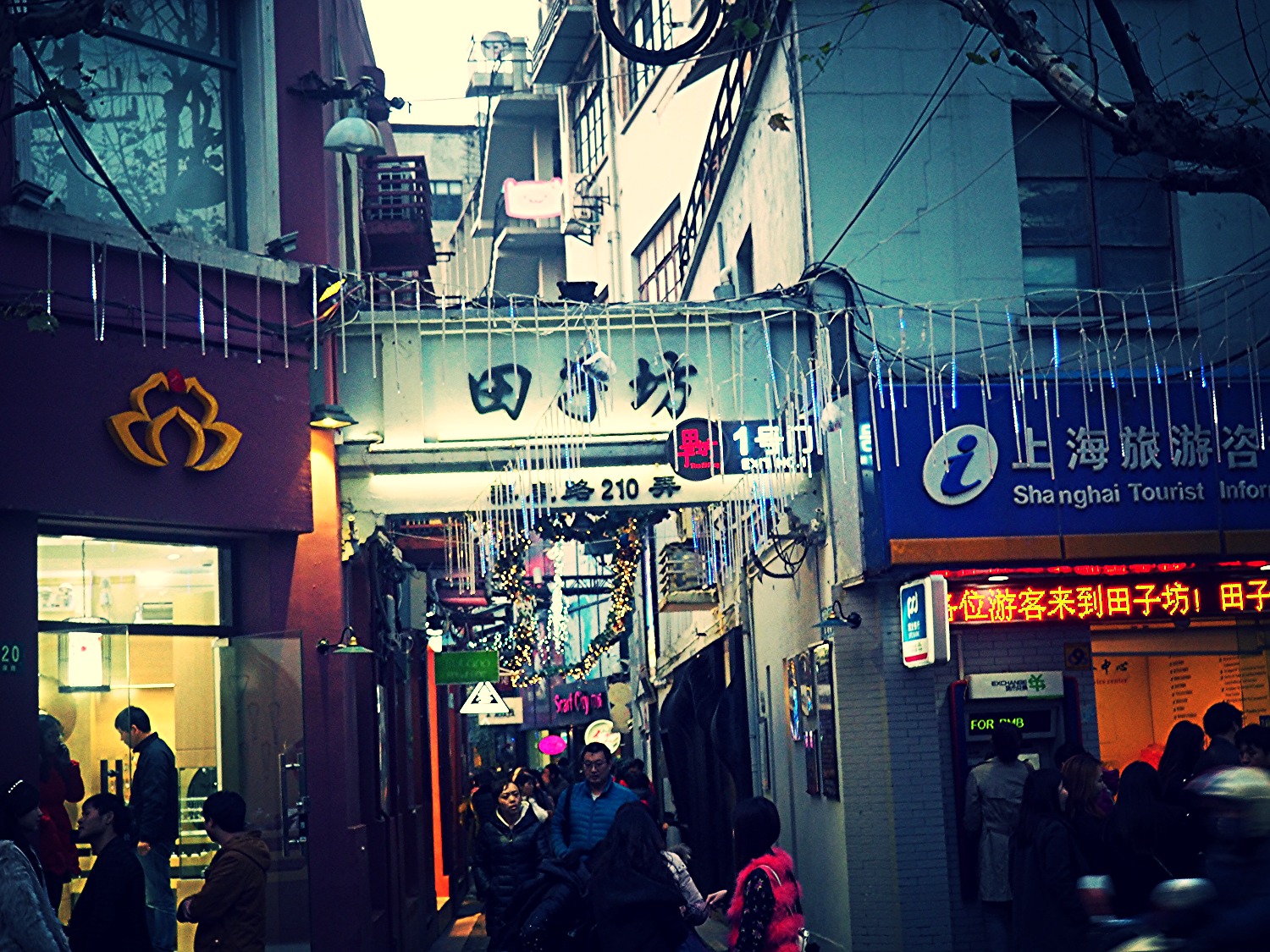 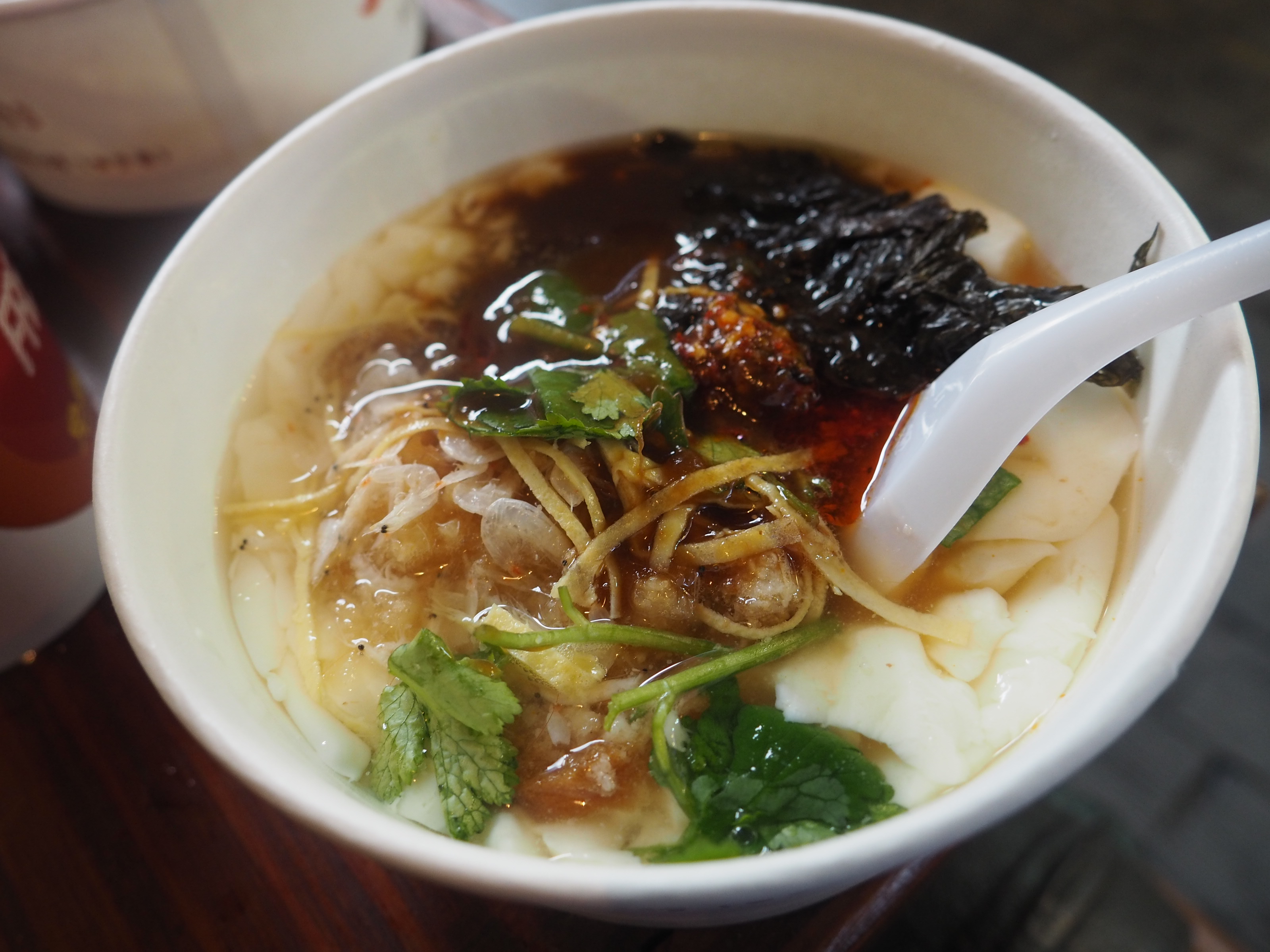 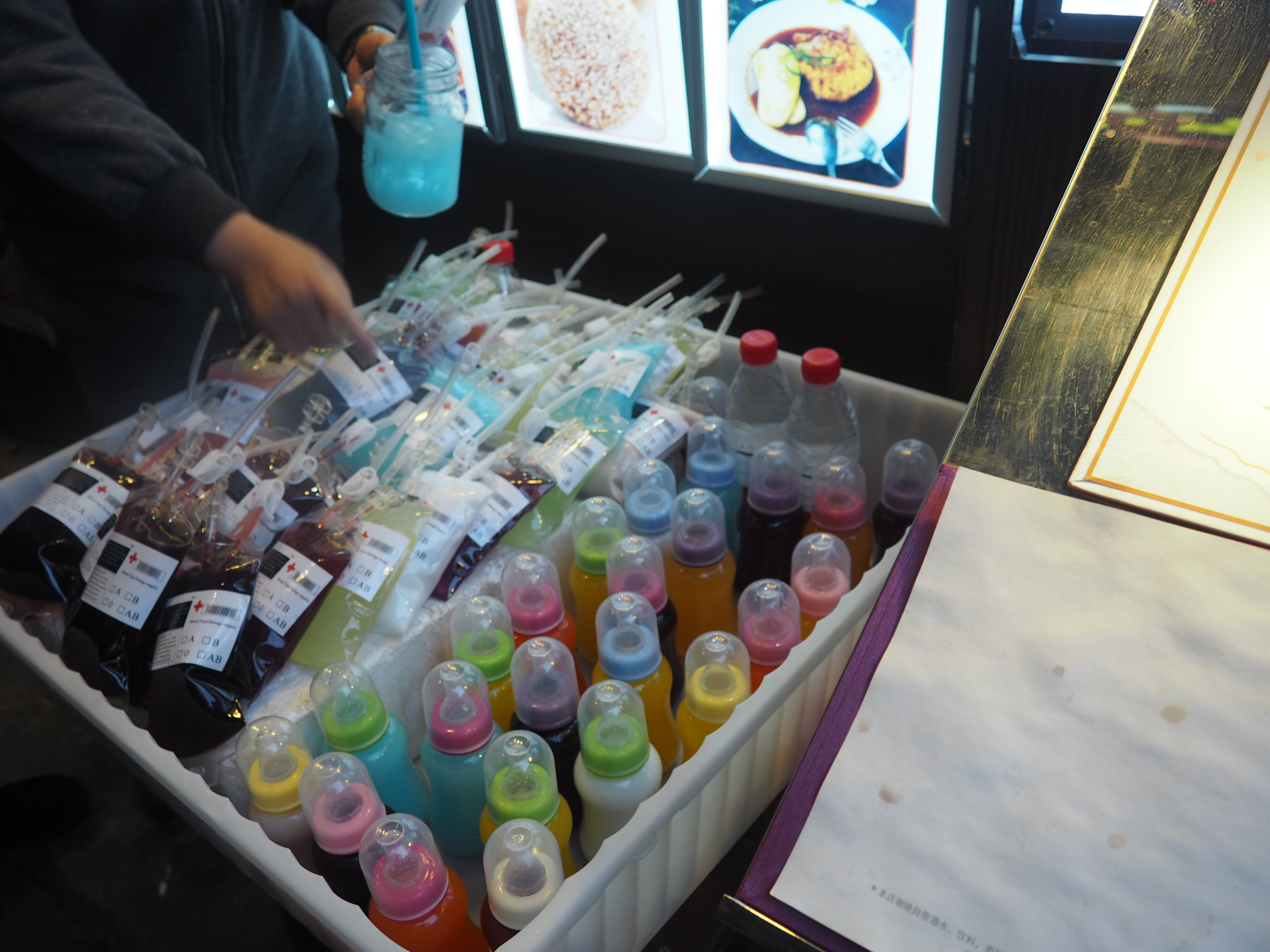 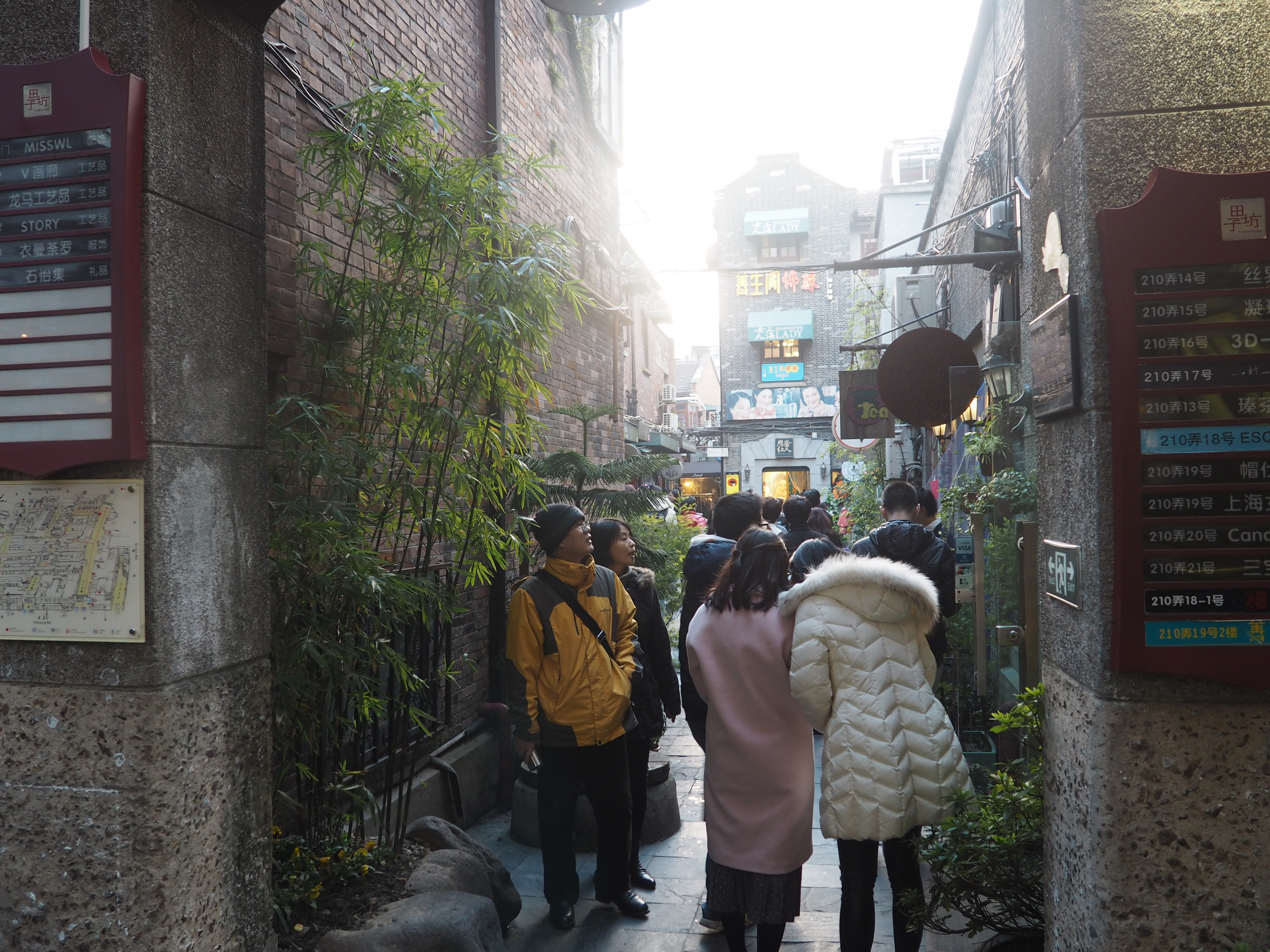 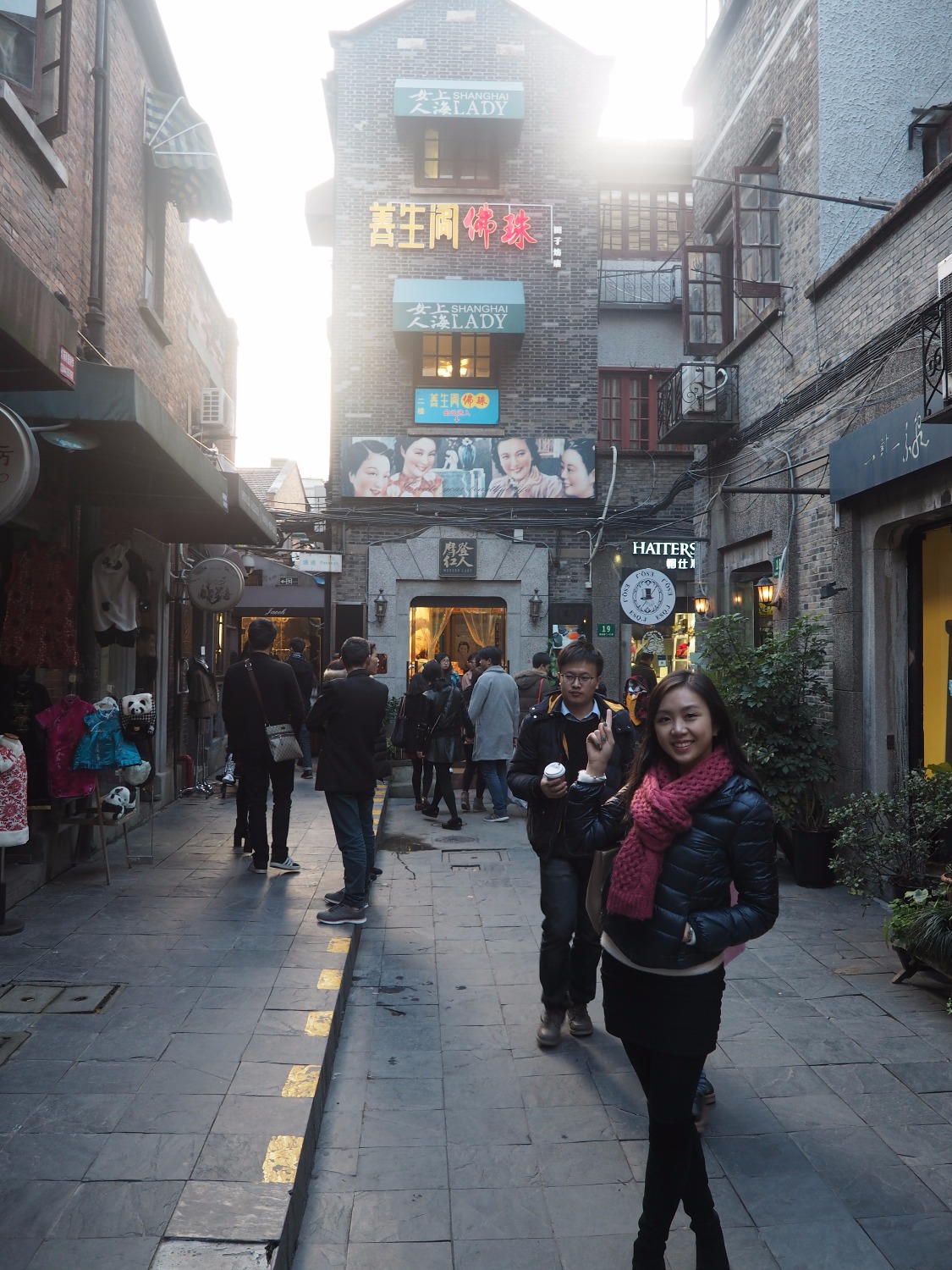 There's lots to see and do at Tian Zi Fang. There are arts, crafts, shopping, food stores and cafes, it's like a little hipster town situated among these old looking buildings.
Be sure to try out some of the food there, they have quite a range of food that I have never tried myself either. Some stores also sold novelty drinks, great fun for the kids, and some sold savory tofu dessert.
The stores at Tian Zi Fang are also worth visiting, if you're willing to spend some time you'll definitely find some pretty cool or cute things that you can take back as souvenirs.
During this trip I was introduced to 串串香 (Chuan Chuan Xiang) which again is food on skewers served in hot soup (sort of like spicy hot pot soup) and I loved it!  I'm a sucker for spicy hot put so I knew I would love this meal before I even began eating and ever since this Chuan Chuan Xiang meal I've been searching Hong Kong and Shenzhen for a place that serves this. 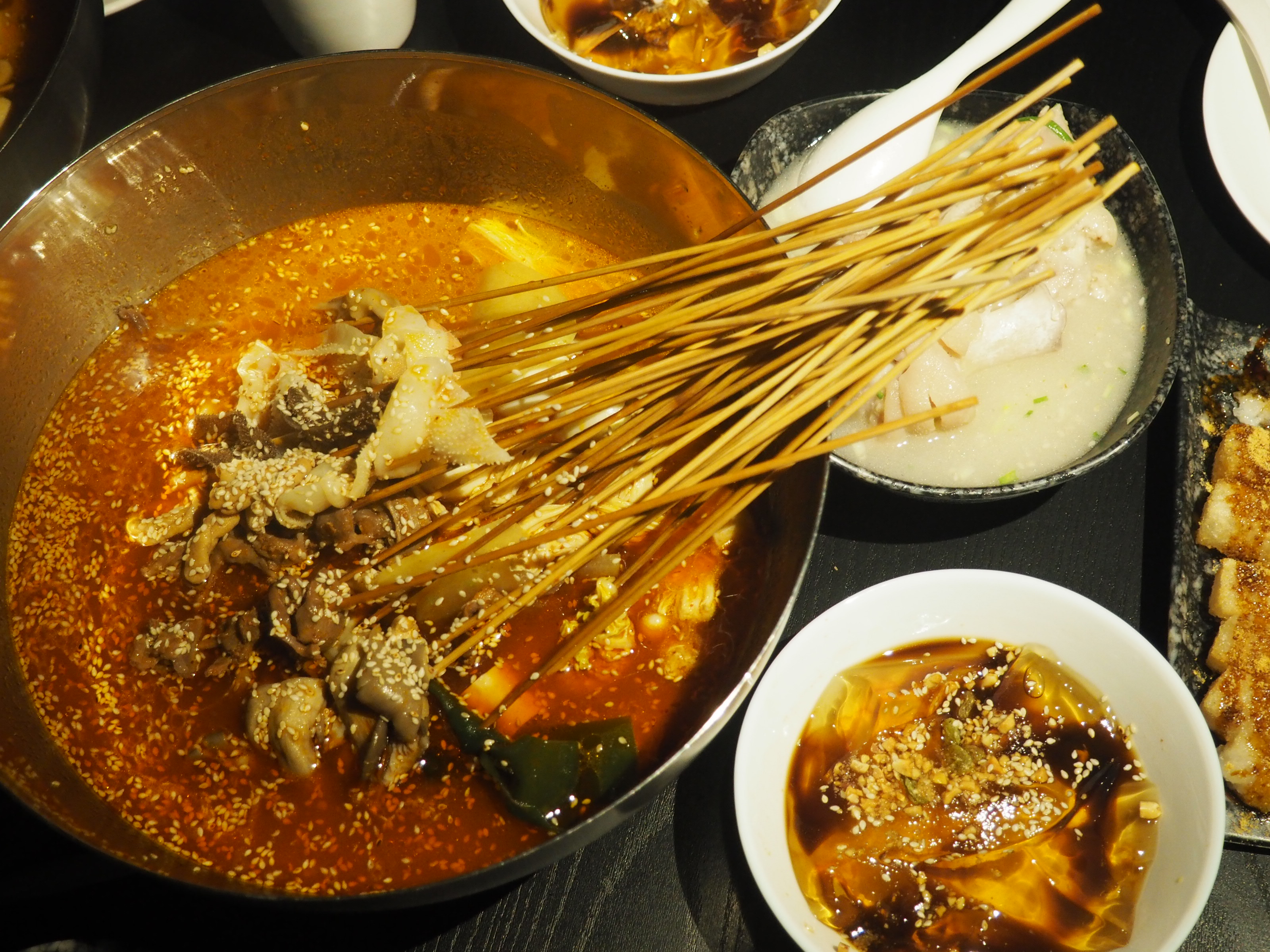 I can't remember the exact location of this restaurant we went to but it's approximately 10 -15 minutes ride from Tian Zi Fang. There's heaps of stores in Shanghai that serves Chuan Chuan Xiang so if you ask around you'll definitely get recommended one.
We ordered meats, organs, quail eggs, veggies  to have on the skewers. We also ordered jelly (Bing Fen 冰粉), pig's trotters, rice cakes and sour noodles to have as sides. You can choose the level of spiciness for the soup that your skewers come with, we chose to have medium level spiciness. You can also ask your waiter to give you some dipping sauces like vinegar or a sauce they make for you that tones down the spiciness of the food. A lot of our vegetables fell off the skewers and into the bowl so you might need to fish around the pot for them. 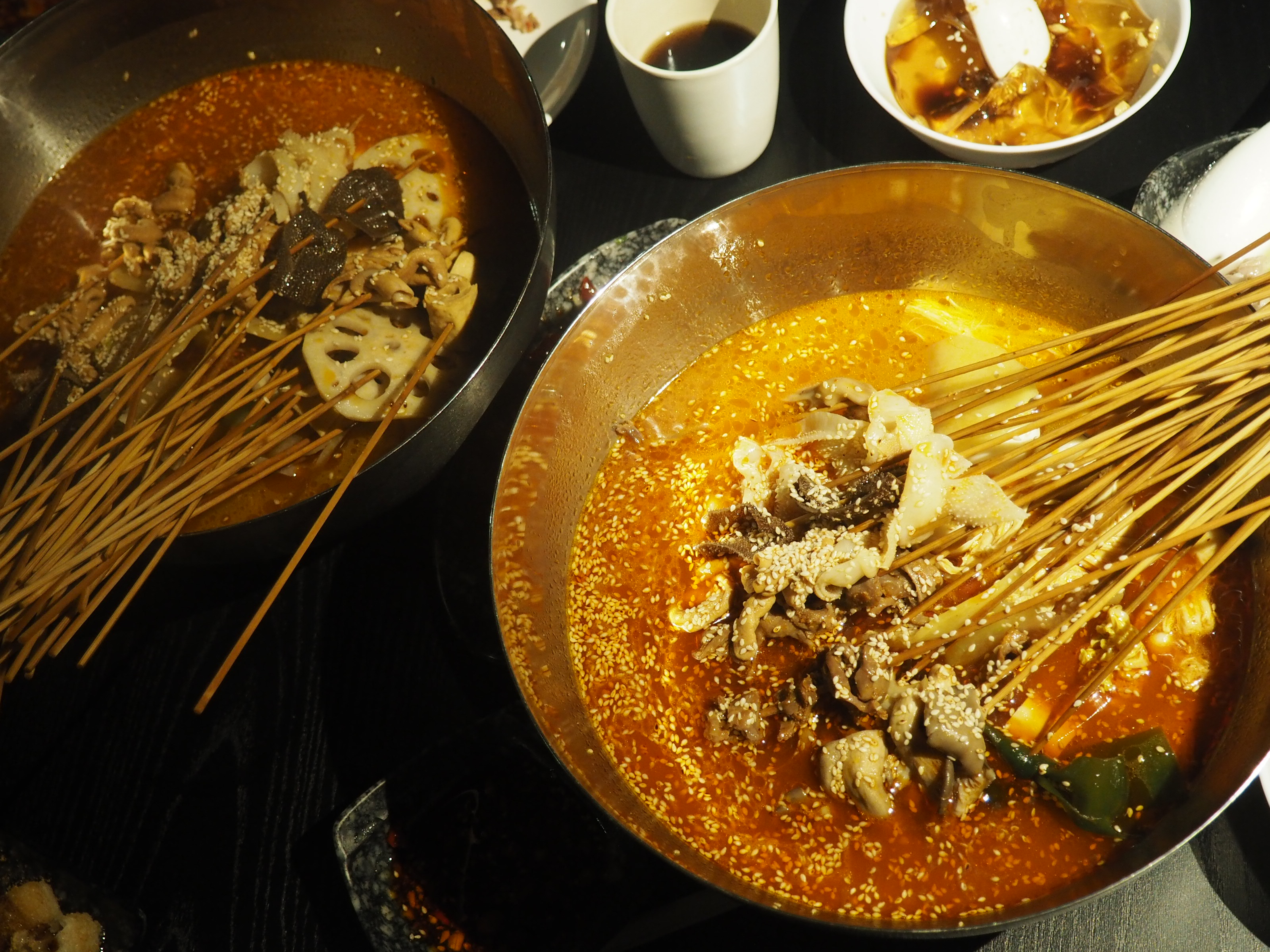 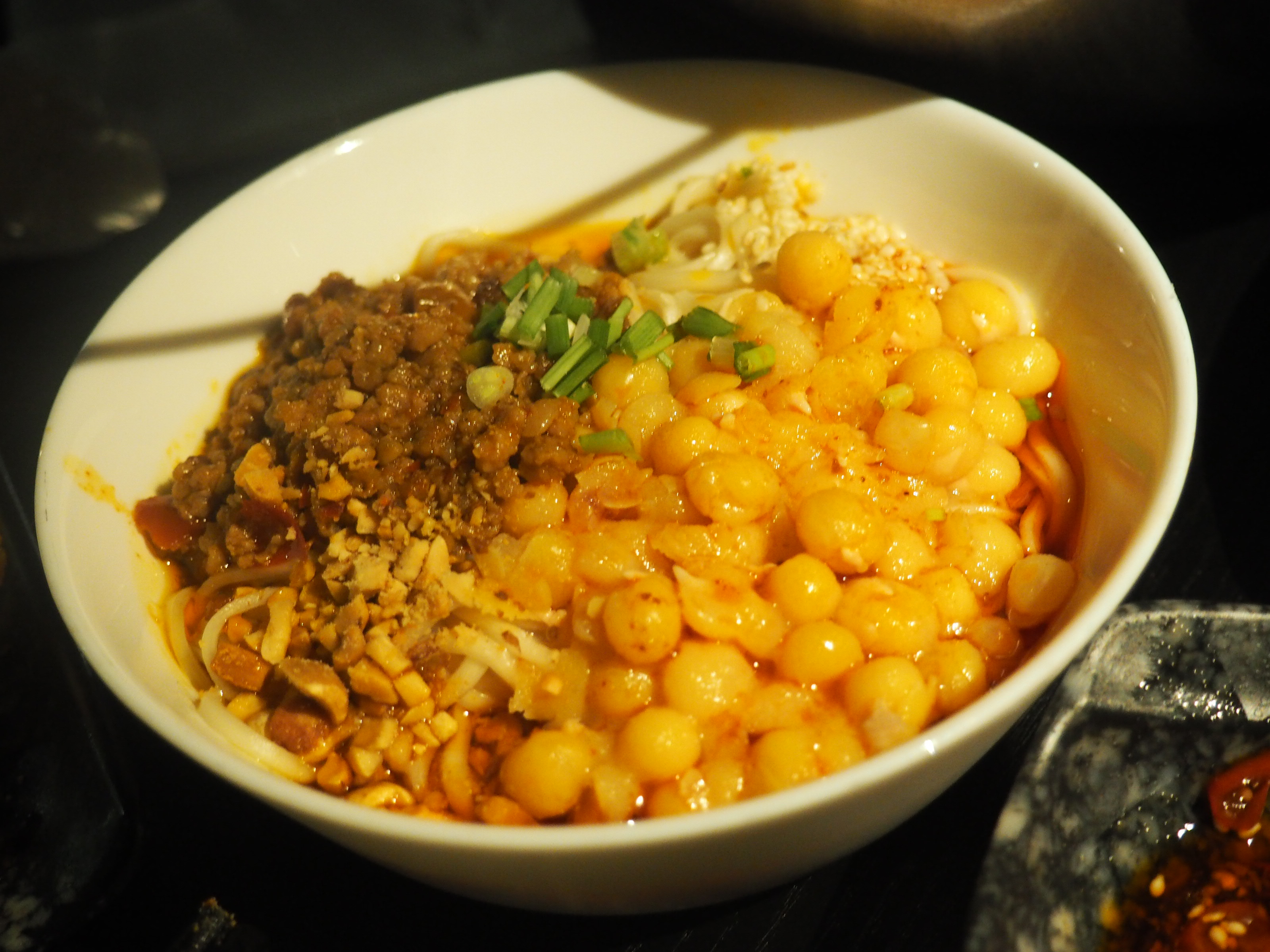 I loved the jelly that they served. It's sweet and cold, a lot of diners also ordered this. For me the jelly soothed my mouth after eating the spicy skewers. The pig trotters are apparently good for girls' skin but I personally didn't like it. The meal was not expensive at all, some skewers could just be around RMB2.00 for a couple of skewers. Chuan Chuan Xiang is not a Shanghai dish but it's definitely worth trying especially if you're a hot pot fan like me.
Lastly you should definitely check out the bars on The Bund, you can enjoy the view whilst sipping on some alcohol and having fun with your friends. If you're feeling clever you should head to People 7, it's a puzzle bar.
People 7
805 Julu Lu,near Fumin Lu, Shanghai, China,中國上海市巨鹿路805号, 近富民路
At People 7 you have to solve the puzzle to get into the bar and also to get into the toilets! It's fun but it can be a mess if you're drunk!
If you've been to Shanghai, I hope you enjoyed it as much as I did and if you haven't been then you should definitely look into it!