What is Puerh Tea? 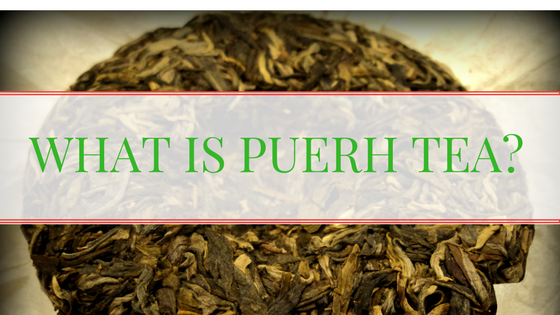 We've arrived at the final installment of introductory guides to each type of tea. I was worried that these posts might be too "old hat" for seasoned tea drinkers but also felt that they were important to have here for newbies. Thanks for hanging in there folks!

Puerh is a fermented tea, part of a larger category known as Hei Cha (dark tea), that is produced only in the Yunnan Province of China. Most of the tea trees used are of the larger leafed variety, Camellia Sinensis var. Assamica. Tea production in this region dates back as early as the Han Dynasty. Puerh is unique in that the leaves are often compressed into flat cakes called bings as well as other shapes like mushrooms, bricks, and birds nests.

Puerh can be divided into two distinct types. Sheng, or raw, puerh has a greener appearance because the leaves are allowed to retain some of the natural enzymes, allowing them to ferment and age over time. This process can be sped up by storing the tea in a carefully controlled, humid environment. Shou, ripe or cooked, puerh has a very dark appearance because the leaves are artificially fermented prior to being pressed into cakes. This process also dramatically affects the taste, making it dark and earthy.

Sheng and shou are handled similarly in the initial stages of processing. After harvesting the leaves are withered and pan-fired. The heat level is high enough to bring oxidation to a near halt but it isn't stopped completely. They are then rolled, by hand or machine, and then dried in the sun. The finished leaves are referred to as mao cha, or rough tea. Raw mao cha can be sold and consumed as is but it is most oftenly lightly steamed and compressed into a cake.

Shou puerh then undergoes an additional step of wet piling known as wo dui. The leaves are then sprayed with water and covered in order to maintain a moist environment, effectively creating a tea compost. Beneficial bacteria such as Aspergillus spp. and Penicillium spp. play a role in this process as do yeasts and other microflora. This artificial fermentation process was invented in 1973 as a way to quickly replicate the aging process that can occur in very old raw puerh.

The two varieties are very different from each other in taste and I find that most people will have a strong preference for one or the other. Sheng is bright and astringent with complex vegetal and floral notes. It can be quite bitter but is also known for hui gan, a comeback sweetness that most people will feel in their throat. I often describe raw puerh as a green tea that punches you in the face, but in a really nice way.

Shou puerh can be described as extremely dark and earthy (think forest floor after it rains) but it will usually have a natural sweetness with very little astringency. Notes of dark cocoa and even dried fruits can pop up if you find a really good quality one. Poorly processed tea can be so unpleasant that it borders on fishy so be wary of buying from unknown sources.

How to Brew It

When using a western method water temperatures are usually around boiling point, 212° Fahrenheit. If you are finding a young puerh to be too bitter, try dialing it back to 175° Fahrenheit. Steep times can vary between 3 and 5 minutes depending on the tea. Puerh can be really hard to measure, especially if it is compressed, but weighing your leaves will help make sure that you are using the right amount. Most teas will call for 2 to 2.5 grams of leaf per 8oz cup of water.
Gongfu is my go-to way to prepare puerh because I really like the way it concentrates the flavors. Gaiwans are a handy tool with any tea, particularly with puerh because you have more control over the heat level and pouring speed. Yixing or Jianshui clay vessels are also very popular. Water temperature will usually be from around 212° Fahrenheit with steep times will usually be about 30 seconds.
Pro Tip: If your shou puerh is too earthy, try giving the leaves a short hot water rinse (10-20 seconds) before making your first cup.
What is your favorite region for puerh? Let me know about it in the comments!

Essential Things For You And Your Family During The Pandemic

Mission to the touch the Sun – NASA

Taking a Hot Bath Burns As Many Calories as a 30-minute Walk, Study Says

4 Ways to Turn Your Cell Phone into a Thermal Camera: FLIR vs Seek vs Therm-App vs CAT

What is Puerh Tea?