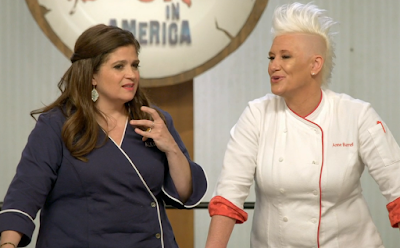 Food Network's Worst Cooks in America season 20 begins tonight and airs weekly on Sunday nights at 9pm ET. This season brings a new mentor competing against Anne Burrell which will be Alex Guarnaschelli.  Both Anne and Alex are recently engaged - Anne in April and Alex a few days ago.  Worst Cooks in America continues to be one of Food Network's top rated shows, so we will continue to see the ridiculous contestants appearing on the show and multiple seasons throughout the year. This year the fourteen contestants that will compete on the show include:
The winner of Worst Cooks in America season 20 will receive $25,000 and I will do another post about the show before the season finale. This season is only seven episodes long (season 18 was ten episodes) with the finale being on Sunday, August 2nd.  Alton Brown was a new mentor on season 18 with mixed results, so we will see if people like Alex Guarnaschelli on this season.  Feel free to discuss this season in the comments section as people like to discuss the season as it progresses.