The pandemic ended a long period of global economic expansion. The International Monetary Fund (IMF) estimates the global Economy shrunk 4.4% in 2020, the worst since the Great Depression of the 1930s. China was the only major economy to grow in 2020. Meanwhile, global debt climbed to $281 trillion by the end of 2020, a $24 trillion increase over 2019, and reached 98 percent of gross domestic product (GDP) compared with 84 percent in 2019. 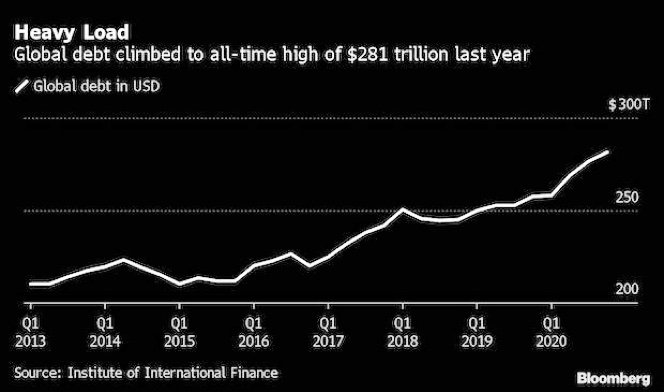 World economies entered the pandemic saddled with debt, which will hamper the pace of economy recovery. Many countries depend on consumer spending to drive their economies (about 70% in the U.S. and Canadian), and during an economic slowdown firms lay off workers who must cut spending. Still, the IMF estimates global economies will rise 5.2% in 2021, fueled by growth in India and China.

Japan continues to lead the pack of major countries with 234% debt to GDP (developing countries’ ratio averaged 250% at the end of 2020), while the U.S. government’s appetite for debt remains strong. Before COVID-19, U.S. debt continued its climb, and with COVID-19’s effects ended 2020 at 109% debt-to-GDP. The U.S. is one of the strongest economies in the world, yet it ranks among countries with the highest debt to GDP ratio consistently — twelfth at the end of 2020.

Global stock markets recovered sharply at the end of 2020 and continue to rise in early 2021. The stock market is not a barometer of economic health, but it gives an insight into market watchers’ views of companies’ future performance. Today, market pundits expect firms to recover unscathed by the pandemic. 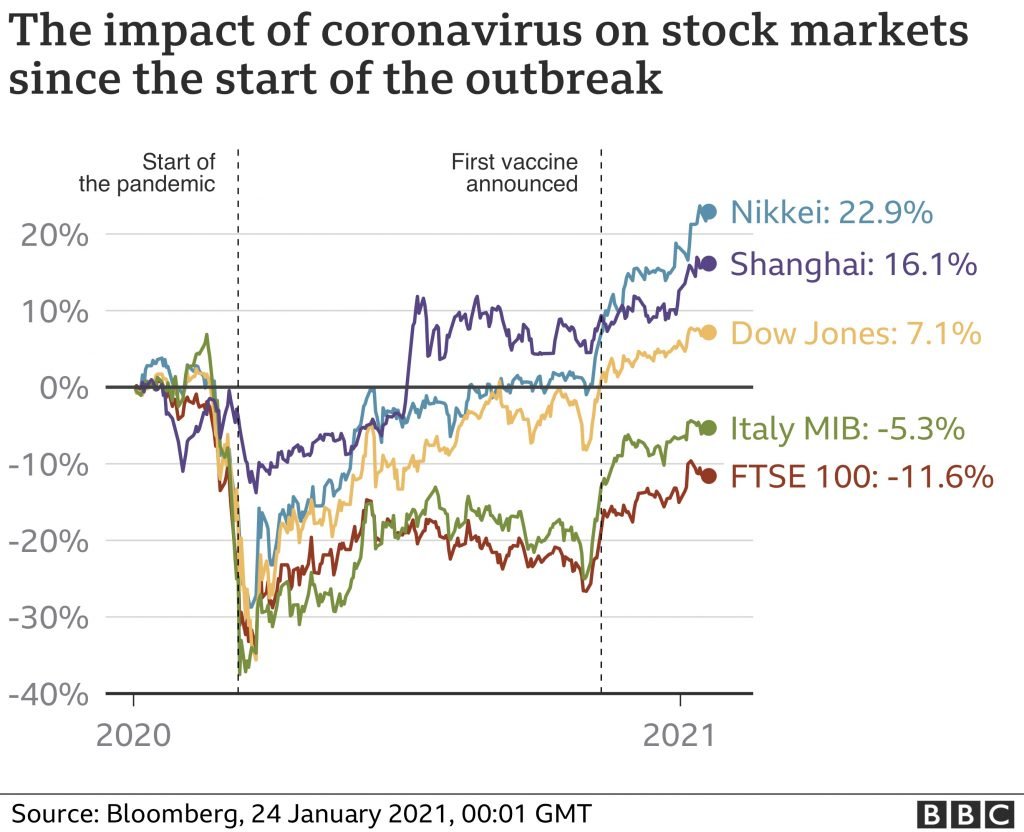 The Canadian government pumped vast sums into the economy to help individuals, families, and firms, and to prevent a major economic downturn. This spending binge caused the deficit to grow at the fastest rate among G-20 countries, and produced a huge debt surge. 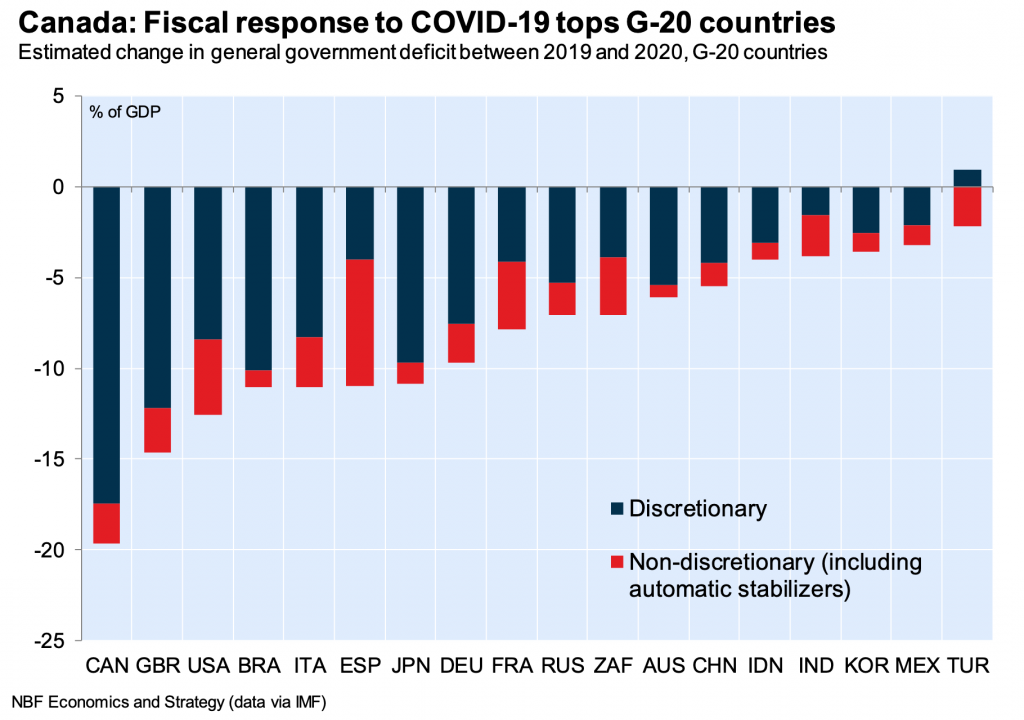 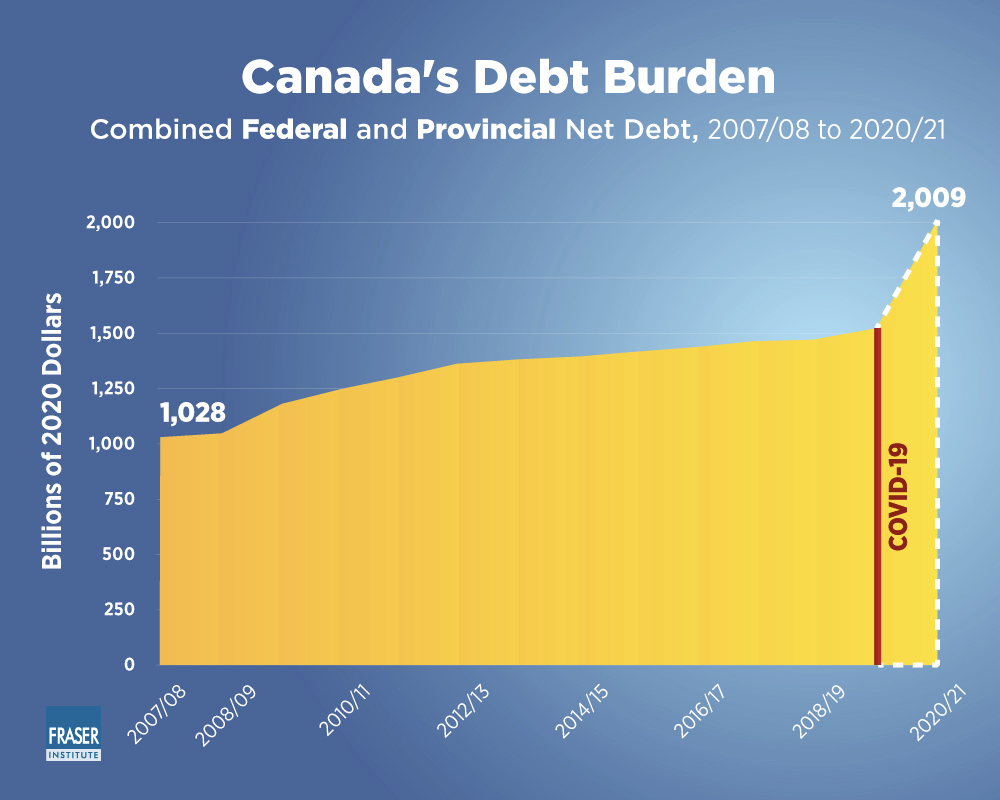 Deficits per se aren’t the issue. We must distinguish between temporary and permanent deficits. That’s the difference between borrowing 25% of the cost of a project with a two-year payback (temporary) and routine borrowing to cover operating costs, such as wages (permanent).

Our strategy is clear: We will do whatever it takes to help Canadians through this crisis. We will invest in every necessary public health measure. We will support Canadians and Canadian businesses, in a deliberate, prudent and thoughtful way. And we will ensure the Canadian economy that emerges from this pandemic is more robust, inclusive and sustainable than the one that preceded it, with a stronger, more resilient middle class.

Canada is gambling that its substantial response to the COVID-19 crisis will cause an early economic rebound once the country reaches herd immunity. Households did not respond as expected — they saved instead of spent funds. And despite the massive funds’ infusion, Canada’s economy shrunk 5.4% in 2020, the most since the Great Depression. Still, the government claims that without its intervention, unemployment would have peaked at almost 20% instead of about 13%. 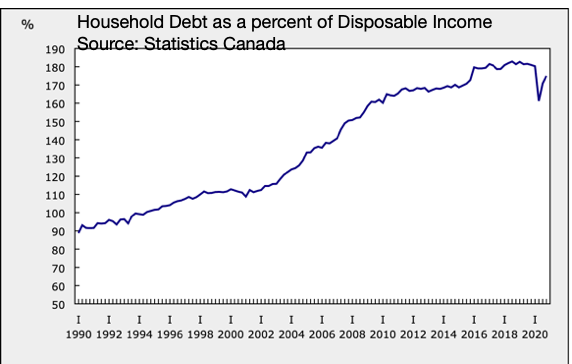 First, the hardest hit and the greatest needs are in the lowest income groups. Poor families will get poorer even with help because of their fragile base. Richer families will get richer with help for the opposite reason. Second, firms will not self regulate and will seek ways to cheat when asked to regulate themselves. The public policy think tank, The American Enterprise Institute’s post mortem of the Great Recession showed:

And yet government regulators created bureaucracy to regulate these firms but did a poor job. So, while government must intervene in the economy sometimes, it must target its help to the poor and those in need, and manage the delivery well.

Third, whatever action government takes the opposition will oppose because politicians know the major of the population won’t hold them accountable for their stupid decisions. Blind party affiliation and self interest will cause opposition, too.

Three views exist about government intervention in the economy — conservative, liberal, and ignorance (which includes some in both groups). Conservatives, abhor government involvement; some conservatives see any help as a socialist plot which is utter rubbish. Liberals want Keynesian-style intervention, period. The ignorant listen to the news and take talking points from their favorite commentators, disregard common sense and facts, and hold co-opted views as sacred. People do not dialogue or discuss facts. We have become polarized. Like sheep, people follow politicians, many of whom make bad decisions confident the unsophisticated electorate won’t hold them accountable.

Let’s look at Canada’s response to the pandemic. First, here is a vital question: What value do we place on elevating interests of the people above the deficit? Are people’s health, security, dignity more important than balancing the budget? To be sure, without financial support, more people will need government help later. So, perhaps Canada’s strategy is wise for the long-term to prevent widespread suffering, and position the economy for rapid recovery.

The central issue is how well government targeted its help and how effective it managed that help. Research abounds showing governments are ineffective, wasteful, and often corrupt. They will not use the best vehicles to deliver help; they will funnel funds through cronies, and they will not direct help where it’s needed most. For instance, small businesses are the engine of our economy. Their lobbyists might not be as effective as larger businesses. Did the Canadian government target small businesses in sufficient detail to help most survive this crisis? Time will tell, but early signs show they did not, and they wasted funds in other areas.

This pandemic-driven downturn differs from others. Governments’ response varies, too. Their programs appear to have clear end goals to help consumers and businesses, especially small ones, get back to work.

Governments must use this time to develop infrastructure projects, which should become the engine of economic growth in the near to medium term. That consumers should spend COVID-19 relief funds to keep the economy moving is sophistry. If government wants people to benefit from its help, politicians should encourage households to be wise stewards because some individuals might not return to work for a long period (or never) as happened after the Great Recession.

Debt and deficits need servicing and these costs, even with low interest rates, will claw funds from other needed areas in the economy. Meanwhile, after this round of financial support, government must remove taxes from small businesses and create a less bureaucratic environment for them to return to pre-pandemic levels and grow. Small businesses are the economy’s wealth generators and job creators; we must encourage them.

Time will tell whether the Canadian strategy works. The government’s intentions were good, but early indications show poor execution.

This post first appeared on Bible-Based Stewardship Blog - Biblical Stewardship, please read the originial post: here
People also like
64 Awesome Things to Do in Costa Rica, Where to Stay, Know Before You Go
VPN providers should strictly follow the rules: Government
Medex Supply – Better Prices for Better Quality
What would happen to a modern-day Moses in America?