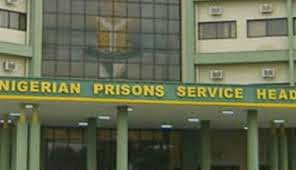 108 inmates out of the 275
that escaped during a jail break at the Medium Security
Prison in Minna, Niger State last week, have been
recaptured, the Nigeria Prison Service has said.
It stated that the fugitives
were apprehended through the combined efforts of the
Nigerian Army, Police, Department of State Services, Prison
personnel and cooperation of surrounding communities.
However, 166 other inmates are still at large.
A statement by the NPS spokesman, Ope Fatinikun, on
Monday in Abuja, said the total number of inmates
presently in custody was 157 including 49 others that did
not escape.
It added that search for the other fugitives was ongoing.
The statement noted that the Comptroller-General of
Prisons, Dr. Peter Ekpendu, who was recently appointed in
the wake of the prison break, appealed to communities and
surrounding states of Kwara, Kaduna, Kebbi and the
Federal Capital Territory to be vigilant and to watch out for
any suspicious movement around and report such to the
nearest Police or Prisons formations.
"Once again, the Comptroller-General of Prisons wishes to
reassure the general public that from all investigations so
far, there was no external or Boko Haram attack in the
Prison's escape incidence", the statement added.