The Rise of Africa's Richest Person 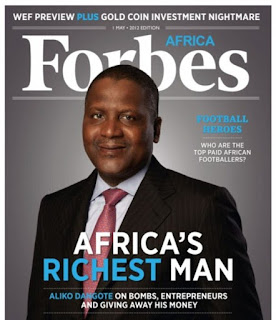 Aliko Dangote, a Nigerian, is Africa’s richest person with a net worth of $14.7 billion (2015), making him No. 67 rank on the World’s Billionaires List. The roots of Dangote’s rise lie 150 miles (240 kms.) south of the Sahara Desert in his hometown of Kano, Nigeria’s second largest city. When the British arrived in the late 1800s, Kano was West Africa’s most important business center.

THE HIDDEN HILLS OF CADAQUES
Cat Tunnel Cat Toy Felt Pom Splicing …
How to breed blue Oscar fish
11 Reasons Why Property Investment is…
LOLA BROOKE DELIVERS ICONIC ROLLING L…
The business of Aliko Dangote, started under the British rule when his grandfather, Sanusi Dantata, grew rich trading commodities like grain oats and rice. Sanusi instilled on Aliko a businessman’s mind-set at a young age. At 8, Dangote turned allowance into startup capital. “I would use it to buy sweets, and I would give them to some people to sell, and they would bring me the profit,” Dangote says. “When you are raised by an entrepreneurial parent or grandparent you pick that aspiration. It makes you be much more aggressive – to think anything is possible.”
Dangote, a muslim, attended Al-Azhar University in Cairo and studied business. After graduation, he asked his grandfather for permission to move to Lagos. A $500,000 loan from his uncle set up 21-year old Dangote as a trader of rice, sugar and Cement. He was well capitalized and a naturally talented trader. He imported sugar from Brazil and rice from Thailand and sold them locally at a huge markup. At his height, he says, he was pocketing $10,000 (P460,000 at P46/US$) in profit a day.
He also worked the politicians. According to WikiLeaks, Dangote “held exclusive import rights in sugar, cement, and rice, using such advantages to do volume business and undercut competitors.” Dangote flatly denies this. Dangote Sugar started in 2000 and quickly expanded the annual production capacity of its refinery at Lagos’ Apapa Port to 1.44 million tons, enough to satisfy 90% of Nigeria’s national demand. By the time Dangote Sugar debuted on the Nigerian Stock Exchange (NSE) in 2007, sales had quadrupled to $450 million (P20.7 billion). The flour firm, which began in 1999 and also produces pasta and noodles, followed similar trajectory. It began with a single mill, tripled revenue to $270 million, increased capacity eightfold to 1.5 million tons. Then joined Dangote Sugar on the NSE in 2008, the same year Dangote became the first Nigerian on Forbes’ World’s Billionaires list, at No. 334.
In 2005, Dangote secured a $480 million loan led by the World Bank’s International Finance Corporation. Nigerian banks didn’t have the ability or the stomach, to put up the cash alone and agreed to plunk down $320 million of his own money to build a cement factory. Dangote Cement listed on the NSE in 2010 as a $1.3 billion-in-sales company. The three companies (sugar, flour and cement) today do a combined $3 billion (P138 billion) in revenue; while Dangote Flour operates at a loss and his sugar’s net margin falls in line with Brazilian peer Cosan, the cement company is wildly profitable, with a margin of 52%, about double that of close competitor LaFarge Africa.
Oil represents another big play. Dangote is busy building a refinery outside centra Lagos. If all goes according to plan, it’ll produce 650,000 barrels a day – a variety of gas, diesel and jet fuel. Dangote would basically walk away with a monopoly on refined oil in Nigeria, the other four Nigerian refineries are viewed as corrupt to the point of non-functioning. To make it happen, Dangote plans to invest some $10 to $11 billion in the project and an adjacent petrochemical plant, with at least $6.75 billion in debt financing.
In 2015 his Dangote Cement, Africa's largest cement producer, launched new cement plants in Cameroon, Ethiopia, Zambia and Tanzania. In total, Dangote Cement produces more than 30 million metric tons annually, with a plan to double capacity by 2018. Dangote owns nearly 91% of publicly-traded Dangote Cement through a holding company; this percentage exceeds the 80% ownership ceiling set by the Nigerian Stock Exchange. Other companies in the Dangote Group - which is active in 15 African countries - include publicly-traded salt, sugar and flour manufacturing companies.

The Rise of Africa's Richest Person