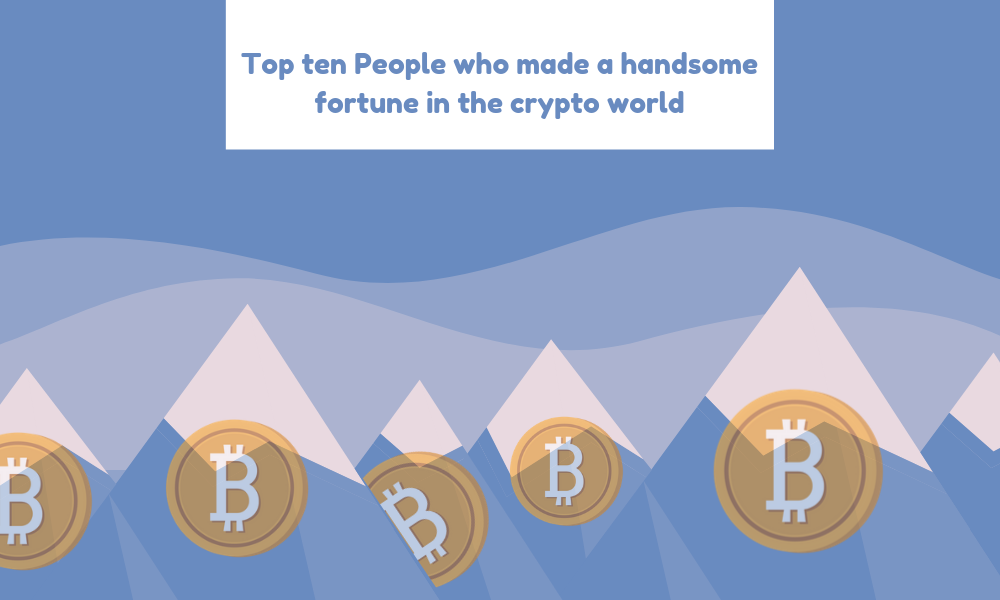 The crypto industry had been a treasure trove for many investors who tried their fate with it, and crypto turned it to a handsome fortune, let us have a look on the ten top people who made the most out of it

64 Awesome Things to Do in Costa Rica…
Top Sites Where to Buy Bitcoin in Aus…
DIY Beard Oil: 5 Genius Recipes & How…
Save Cost And Time With This Guide On…
What is the source of knowledge? Tru…

The current CEO of Digital Asset Holdings, a successful entrepreneur in financial services and the former Managing Director at JPM (JP morgan chase). DAH is associated with efficiency and security-based tools and the speed with which the transactions are carried, specifically BTC. She is widely credited as the creator of the credit default swap as a financial instrument.

The CEO and founder of Digital Currency Group, Barry, had been one of those investors who showed a firm trust in Bitcoins at the earliest and is currently worth about $200 million in his Bitcoin investment. He started his career with Houlihan Lokey as an investment banker, progressed to launch DCG in 2015 with the financing of Masterkind and Canadian bank CIBC. The company has invested in companies such as Bitpay,bippesa,bitgo,bitpagos,gyft,kraken, ripple labs,tradeblock, unocoin, and xapo. He further founder Bitcoin Investment Trust and Second Market.

Founder of Draper Fisher Jurvetson(DFJ), Draper University, Draper Venture Network, and Draper Associates. The investor who made a handsome fortune with his initial investment in skype and bitcoins and his other prominent investments include Baidu, Hotmail, Tesla, SpaceX, angellist, SolarCity, Twitter, coinbase, DocuSign and focus media. His pinnacle was market in 2014 when he was widely recognized for his purchase at a US Marshals Service auction of seized bitcoins from the Silk Road marketplace website. He is one of the largest holders of BTC in the whole world with his invest today, closing at USD 150 million. Now his laser pointed focus is on Tezos, a new coin launched in 2019.

Winklevoss brothers are the famous internet entrepreneurs and known personalities who purchased $11 million worth of Bitcoin in 2013. Their investment in BTC is about $400 million. The Siamese twins are also American rowers who completed men’s pair rowing events at the 2008 Beijing Olympics. They led a seed-funding round for the Bitcoin payment processor Bitlnstant. The Siamese brothers claimed in 2013 that they owned more than 1% of all Bitcoin existence at that time. They currently possess bitcoin of more than $1 billion value.

He is also an early investor in Bitcoin. He was the one to buy the bitcoins when they were just $3 worth, and with today’s BTC price of USD 4100 can easily make him play with millions of dollars. He launched a cryptocurrency exchange platform –Bitinstant.

The diamond of China with the wealthiest asset in the whole of China and among the principal founders of Bitmain, the largest bitcoin mining firm. Currently placed as the highest-earning Cryptocurrency personalities, Jihan’s earning from the industry is more than $2.3 billion.

The founder of the famous Pantera Capital, which in 2018 was one of the largest institutional owners of cryptocurrencies .with more than 25 years of experience in managing global macro funds and investment advisory services, Dan, came up with PC, which exclusively focused on Bitcoin.

Co-founder of Bitmain and among the wealthiest faces in  China who have already invested a huge fortune on bitcoins and has an asset of about $2.4 Billion.

The bureau was associated with the shutting down of the silk road, and in the same process, it managed to seize 144000 bitcoins, and it decided to sell all the Btc through auctions. We can estimate the tremendous profit the auction would bring to the FBI in an era that witnessed a continuous rise in BTC price with a sum of $567 million.

The most renowned person in the history of cryptocurrency, with innumerable doubts on his real existence, an invisible man managed to create such an enormous fortune. The precise amount of BTC is not yet known, but estimations speak about 900000 BTC worth close to $4 billion. Today bitcoins are the most preferred cryptocurrency, so the man behind it would for sure be the man of highest fortune. He is the first man to solve the double-spending problem in the digital world by using a peer-to-peer network and the first to come up with blockchain technology.

No doubt crypto world is fate based where dice can roll in any direction, and the outcome may or may not favor the player, but the people above are the heroic figures with the fate in their closed fist making a grand fortune with inventive exuberance.

This post first appeared on Coin Market, please read the originial post: here
People also like
64 Awesome Things to Do in Costa Rica, Where to Stay, Know Before You Go
Top Sites Where to Buy Bitcoin in Australia
DIY Beard Oil: 5 Genius Recipes & How to Make It
Save Cost And Time With This Guide On Hiring Graphic Designers
What is the source of knowledge? True knowledge?
InterServer – Web hosting for $0.01/1st month