Bitcoin, the world’s number top cryptocurrency is in a strong bullish trend. The strong bulls movement of the Bitcoin in the crypto market is previously predicted by experts and investors. This year the performance of the Currency is very good and it has maintained its stability in the market.

On June 24, 2019, Bitcoin has achieved the highest of this year’s price of $11,304 mark in the crypto market. The currency is going to strong and the experts have predicted right that the currency’s value will bullish. On June 22, 2019, the currency has also reached up to $11,215 USD and yesterday’s peak value of Bitcoin has made the currency position more firm.

Also Read: Bitcoin Price proves it knows no boundaries as it touches yet another all-time high of $11,000 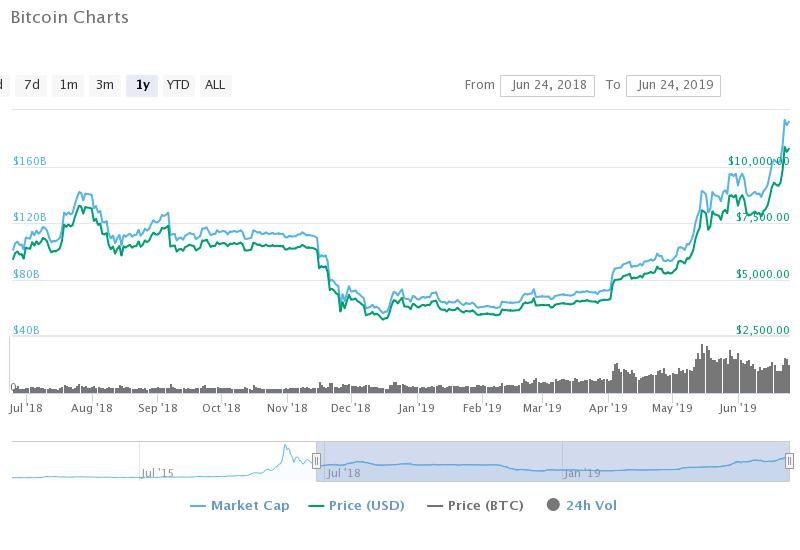 Bitcoin is experiencing ups and downs in the cryptocurrency market above the mark of $10K for three days. On 22 June, the currency has crossed the level of $11K and reached up to $11,215 USD. On the other hand, the currency on June 23, the value of the bitcoin decreased up to $10,416 USD, but on the same day with the bullish movement the currency gained the momentum and reach up to $10,750 USD.

At around 19:00 UTC on June 24, the value of the bitcoin gained bullish momentum above the level of $11K and reach up to $11,300 in the cryptocurrency market. From the past weeks, the currency has joined the bullish trends and the hype also was created because of Facebook’s project Libra.

Bitcoins bulls were not supported by the market’s 24-hour volume. The volume earlier of the crypto market was around $97.6 billion and now it is decreased up to $68 billion. The volume reported by Bitwise Asset Management is around $46.17 billion, which has a lot different than $68 billion, as the Messari.io

While on the other hand, today the other currencies are not doing much well. Ethereum, Ripple, Bitcoin cash and Cardano’s values are decreasing and currencies such as USDT, TRX, VeChain, and Dogecoin are gaining their value. The total market capitalization is $324,867,622,813 billion.