The beginning of 2019 proved to be mildly bearish for the cryptocurrency market. However, the journey up until April looks promising as crypto prices have embarked on a positive path. Changpeng Zhao’s Binance Coin [BNB] was one of the top performers in the industry as it improved its valuation by a staggering 300 percent since the beginning of 2019. The virtual asset was also the first in the ecosystem to break the all-time high [ATH] ceiling this year.

Binance also announced the launch of Binance DEX mainnet recently, which would enable them to allocate the first batch of 5,000,000 BNB to an address belonging to Binance.com in order to convert the ERC20 BNB for existing owners, which was based on the Ethereum blockchain.

The move away from Ethereum blockchain is massive for Binance and the current situation prompted a debate in the community, with users comparing the future of both tokens.

Twitter user @TheGemClub tweeted on the situation, stating that Binance was going to outperform Ethereum in the industry now and the shift would cause Ethereum to undergo massive devaluation. 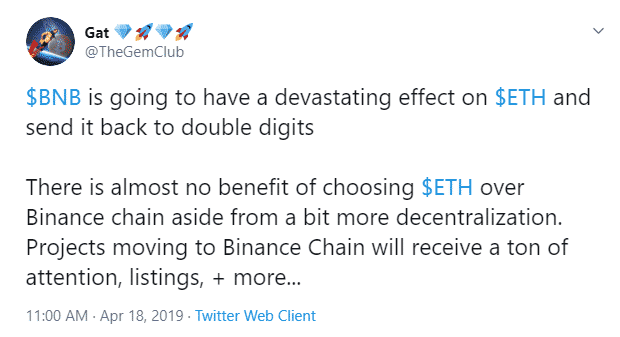 However, CZ was quick to respond to the comparison and declined any form of competition, praising Ethereum’s functionality over Binance with respect to certain features. 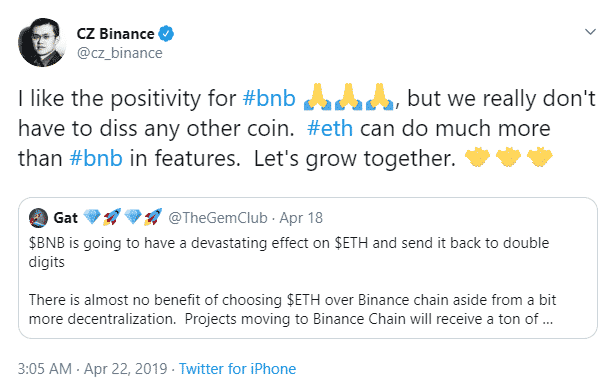 In a previous tweet, CZ had mentioned that Binance did not challenge Ethereum at all because it did not have the option of smart contracts, which was a major aspect of the Ethereum blockchain.

However, CZ has been critical of Ethereum in the past, mentioning that Ethereum lacked focus in development.

He said that the development team of Ethereum was unmatched in terms of innovation and putting forward new ideas. However, they were into too many different things at once, he said. He added,

“Our #BNB dev community is much smaller but focused on one thing. Let’s see how it plays out.”