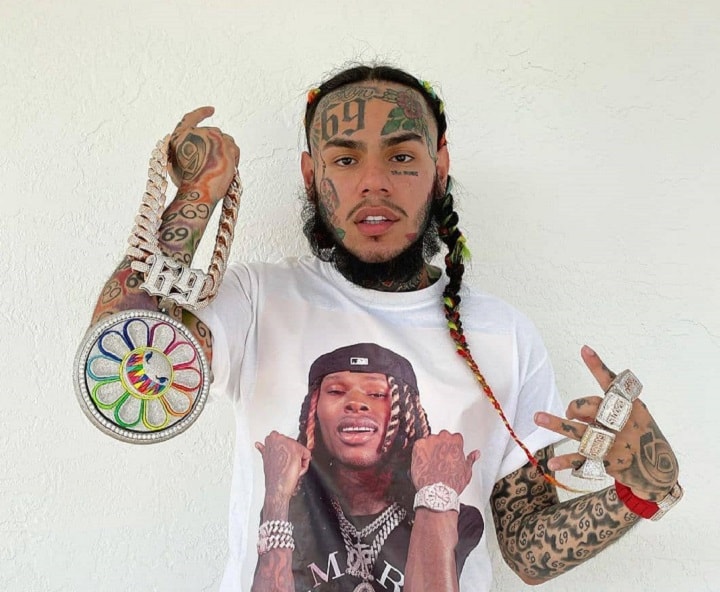 Popularly known as Tekashi 6ix9ine (69), Daniel Hernandez is no stranger to controversies. In 2019, Hernandez was sentenced to two years for crimes he had committed when he was a violent gang member.

His controversial persona is characterized by rainbow-colored hair, tattoos, and publicized feuds with other celebrities. An aggressive style of rapping popularly marks his music.

Tekashi rose to stardom when he released his debut single, “Gummo,” in 2017. The song which would make him a star and later ruin his life has been watched more than 400 million times on YouTube.

In February 2021, Tekashi 6ix9ine returned to Instagram sporting a new look, a Beard, and new sunflower tattoos to go with it.

Early Life and Road to Fame

Born in 1996 in Bushwick, Brooklyn, New York, 6ix9ine grew up with a Puerto Rican father and Mexican mother.

When he was 13, his father was murdered, which changed his life forever. In an interview with No Jumper in 2009, 6ix9ine said he had to drop out of school in the 8th grade to help his mother pay rent.

Instead, he did not further his education and worked several jobs, including selling marijuana to help support his family.

In 2014, 6ix9ine began rapping, something he claimed he only did for fun and not to become a rapper. He would develop a strong online presence built on his eccentric fashion choices.

These included wearing oversized t-shirts emboldened with the word “Pussy Nigga”, rainbow-colored grill and hair, and face tattoos with a huge “69” over his right eyebrow.

He began releasing scream-rap music under the label FCK THEM during that period. The songs included “Scumlife,” “Hellsing Station,” “Gummo,” and “Yokai.” He also established the 6ix9ine persona and described it as a “lifestyle.”

The “Gummo” hit is what catapulted him to stardom. The video launched him on three different trajectories; one that made him a star; another one that made him notorious and one that would probably spell an end to his career.

That popularity led to the uncovering of 6ix9ine’s pre-fame life, including a guilty plea to a child-sex charge that would define him in the public eye.

It was, however, his association with Kifano Jordan, a.k.a. “Shotti,” that would mark the most consequential part of that summer in Brooklyn.

Those who knew 6ix9ine all agreed that he had not been involved in gang life before meeting Shotti.

However, just a year after the “Gummo” video was shot, Hernandez would find himself behind bars facing 32 years to life for several charges that included attempted murder and armed robbery.

The charges were reduced to 2 years after he agreed to cooperate with the authorities to expose the rest of the gang.

Tekashi has captured the world’s attention with escalating controversies and provocations.

He became the troll prince of hip-hop and master at sparking outrage, something he would use to catapult himself to the top with millions of followers on social media.

Tekashi Without a Beard

Tekashi 6ix9ine is not known for his beard grooming style but his rainbow-colored hair, face, and body full of tattoos and endless controversies that include beef with other rappers. 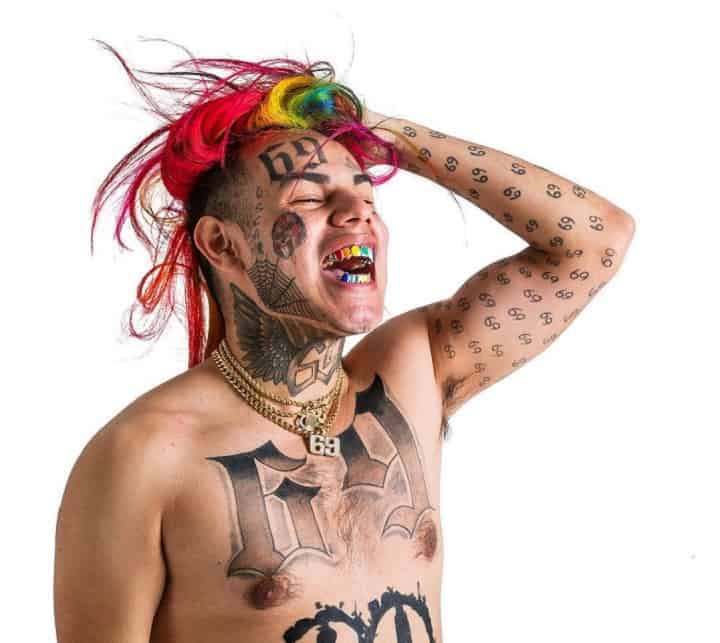 Many love Takeshi, considering his more than 21 million followers on social media and hated by just as many.

He is often characterized by a smooth baby face, most of the time with his iconic rainbow-colored hair.

He is a controversial internet sensation who has garnered millions of supporters. Though Tekashi is mainly seen with a clean-shaven face, there have been times when he has spotted a beard.

Months after disappearing from social media and being in the hospital because of an overdose on caffeine and diet pills, 6ix9ine appeared on Instagram.

He had a whole new look. His body was now covered in more tattoos and his usual babyface his fans had gotten used to was now covered by a thick full beard and probably one of the most impressive beard styles without mustaches any man could rock.

After his album flop, Tekashi 6ix9ine made a first public appearance at a Miami nightclub after spotting a new look after a few months.

6ix9ine stepped out, spotting a well-groomed mustache. It was just earlier on when he had been spotted with a full beard, so maybe, the internet’s troll king was trying new looks to see which one stuck.

For most men, maintaining a beard is usually a challenging task and one of those things that men who can’t grow a beard are thankful about. Fortunately, so many tools are available to make that process as seamless as possible. If you are thinking about growing a Tekashi 6ix9ine beard, here are the tools that you need:

Most bearded men associate beard combs with mustaches. But you can have a beard comb if you are growing a beard.

Beard combs are vital because they help limit ingrown hairs and keep unruly hair out of your mouth.

A beard comb especially will come in handy if you are trying to grow the full Tekashi 6ix9ine beard because you can efficiently distribute beard balms and beard oils.

A good pair of beard trimming scissors is a great tool to have on hand when growing a Takeshi 6ix9ine beard.

Scissors help to trim unruly hairs and are great for a man starting to grow a beard and won’t need a full-on trimmer for some time. Scissors can also help trim away mustache hairs that get too long.

Once you’ve mastered trimming your beard with trimming scissors, you can now graduate to a beard trimmer if you are thinking about keeping your beard short.

A shaving brush comes in handy when it comes time to shave the beard. It is a great tool to have if you use shaving cream.

If you are growing a Takeshi 6ix9ine beard or a mustache, a hairdryer will come in handy when you want to straighten the beard. 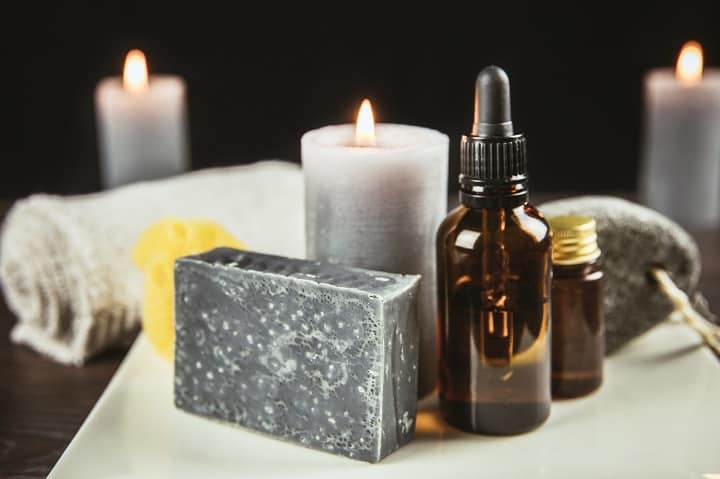 Keeping your skin and beard healthy should be a priority when you start growing a full beard. That’s where a beard soap or wash comes in.

Premium beard oil has many advantages, including taming wild hairs, relaxing the beard, securing moisture, and keeping you smelling great throughout the day.

How to Groom and Style

If you want to grow a beard like 6ix9ine’s, you need to give your facial hair time to grow. To grow your beard faster, use the beard growth products available. While at it, know what beard styles to avoid with your face shape.

Not using beard oil is one of the beard grooming mistakes most men make. Use beard oil to condition your beard to prevent breakage and make the beard appear full and thick. Massage a little beard oil every morning to keep it looking soft and naturally shiny.

Daily grooming is important if you are trying to maintain a beard like Tekashi 6ix9ine’s. Even if you are not shaving or trimming it, a quality beard brush will help prevent the beard from becoming matted or knotting during the day.

Step 4 – Shave and trim the edges

When you are growing a beard, the whole process is a journey. Before your beard grows to your desired length, you will have to deal with wild and patchy facial hairs.

Once you’ve achieved your desired length, shaving and trimming the edges will give it a well-defined shape.

Tattoos and Their Meaning

Besides the controversies surrounding Tekashi 6ix9ine, he still stands out, thanks to the many tattoos covering his face and body. But have you ever wondered about the meaning of some of his most prominent tattoos?

Just above the eyebrow, chest, and stomach, the right side of his face has the number 69 tattooed on them. 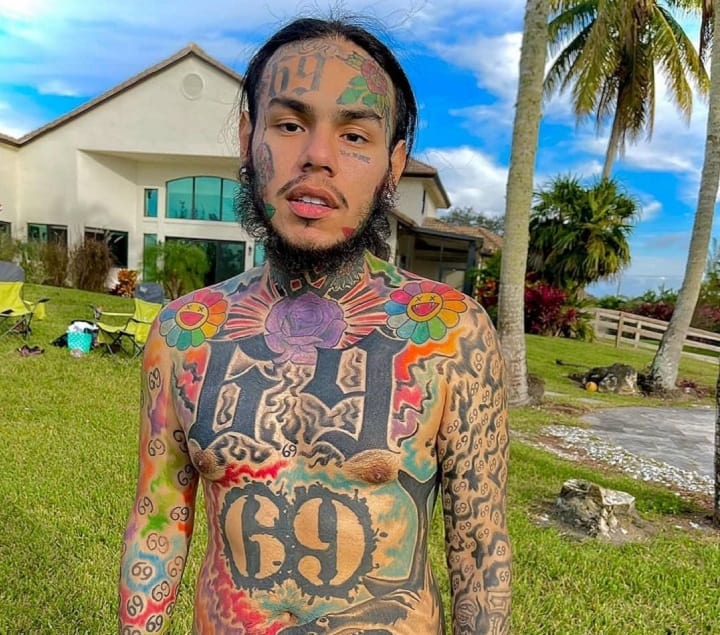 His forearms, throat, hands and knuckles also have the same tattoo. Besides representing his stage name, the tattoos represent the perception of the same number of things to teach people to consider other people’s choices.

When asked about the tattoos, 6ix9ine said, “Live life with an open mind and an open heart and understand the person you talk to.”

The tattoo appears on his left forearm, encased between the numbers 6 and 9. SCUM is the name of the crew that 6ix9ine used to run with. The abbreviations stand for “Society Can’t Understand Me.”

It is a tribute to all kids going through life’s troubles and living day by day to get by.

On the right side of his face, Takeshi has the name “OSCAR” tattooed along the hairline and the face of the character from the movie Saw.

Oscar is his elder brother’s name and he got the tattoo to show his love for him since he is the one who raised him after their father was murdered.

A rose flower is tattooed on the left side of Tekashi’s forehead. The flower tattoo shows his love for the rapper XXXTentacion, who died in 2018.

Tekashi 6ix9ine has a purple rose tattoo below his collarbone. The rose symbolizes mystery, royalty, true love, and love at first sight.

Tekashi has a spider web tattoo on both cheeks and elbows. The tattoo holds a lot of meaning in the world, but most of the time is associated with those who have done time being trapped and just sitting in a prison cell while cobwebs form.

Does Tekashi have a real beard?

After months away from social media, Tekashi 6ix9ine came back rocking a full beard and more tattoos. While many doubted whether his beard was real, it appears his beard is real.

How did Tekashi get a beard?

Tekashi grew his beard after going off social media for a few months. He admitted that he had gained weight and would come back having lost weight with more tattoos and a full beard. It seems like he was also working on a new look and a new hit.

Why does Tekashi have 69 tattoos?

6ix9ine’s 69 tattoos that appear more on his body represent his stage name and two different perceptions and a need to respect other people’s choices.

No, 6ix9ine did not remove his tattoos. Instead, he added even more.

Takeshi 6ix9ine is loved and hated by many. The rapper rose to stardom by producing a hit song to break YouTube’s record and dissing other musicians. He has also been in the limelight for all the wrong reasons, including child sex charges that define him to date. He continues to influence the music industry whether he is producing music or not and will continue to do so for a long time.