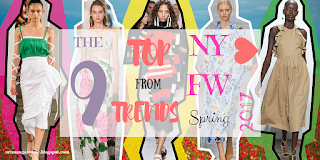 All of us may be-knee-deep in winter right now, but that doesn't mean we aren't already dreaming of the top spring trends for 2017. We got a sneak peek in September during New York Fashion Week and, quite frankly, we haven't seen able to get it off our minds since.

Proenza Schouler; Rosie Assoulin; Opening Ceremony (ImaxTree)
SPRING STRIPES
Bold, bright, and brilliantly textured, spring's stripes are a jolt of energy in a sea of classic Bretons. And while they came in all shades of the rainbow this season, our favourites were those that featured graphic primary colors anchored down with some polished black (naturally Rosie Assoulin's sequin s
hirtdress was another standout of the week.)

Tanya Taylor; Tibi; Lela Rose
GARDEN PARTY
I know, I know: groundbreaking. But in all seriousness, the season's florals felt fresh in their unabashed femininity, blooming up and down long, tiered skirts, ruffled jumpsuits, and voluminous sleeves. (Boy I love ruffles!)

Michael Kors; Prabal Gurung; Jill Stuart
SHADES OF BLUE
One of the easiest colours to wear was also one of the most popular across the board this season-which should come as some relief to those need from black and white but aren't quite ready to heed designers' calls for orange as a new neutral. From the palest seafoam to the richest cerulean, blues are a tune everyone can sing..including me.

Baja East; Marc Jacobs; Coach 1941
BAD GIRLS' CLUB
MORE-is-more maximalism plus a DGAF attitude is shaping up to be the quickest ticket to the cool kids' tab,e this Spring. The references may have been wide and varied-glam rock and rave culture at Mare Jacobs, rockabilly rebels at Coach, louche tropical vibes at Baja East-but ultimately, the same young, wild, and free spirit ran through some of the best shows of the week.

Self Portrait; Monse; Claudia Li
UPDATED OXFORDS
The classic striped button-down has been turned on its head (sometimes quite literally) this season, with designers adding flounces, slashing shoulders, and super-sizing the silhouette, stripping it of any stale, corporate connotations in the process. It's a look that pays homage to tradition, but shows you're not too concerned with playing by the rules.

Delpozo; Jason Wu; DKNY
NEON
Is it just us, or is the future looking especially bright? Designers dipped their toes back into fluorescent waters for spring, both for day (DKNY, 3.1 Phillip Lim) and for night (Delpozo, Jason Wu). While the high-wattage look may seem like a lot IRL, DKNY's neutral-colored layers and athleisure vibe suggested a wearable way to try out the trend at home.

Tome; Zimmerman; J. Crew
RUFFLEMANIA
Frills were BIG at NYFW, both in terms of proportion (some looked capable of swallowing models whole) and in terms of popularity (you'd be harder pressed to ring a show that didn't feature a little bit of flounce). The styles I'm most eager to get a hold of, though, were those that balanced the femininity with a little sleekness or ease--think asymmetrical dresses, one-shoulder tops, and voluminous skirts styled as effortlessly as a pair of jeans.

Milly by Michelle Smith; Alexander Wang; Kaelen
ALL TIED UP
Laces: no longer just for your sneakers. Thanks to this season's runways, there will be plenty of creative ways to strap up for spring, both subtle (Kaelen's spliced shirts and suede dresses) and in-your-face (Alexander Wang's bare, belted waists; Milly's criss-cross arm ties).

Ulla Johnson; Dion Lee; Creatures of the Wind
COOL KHAKI
"Beige" stopped being a synonym for "boring" the second Kim Kardashian slithered into Band-aid-colored bodycon, and this spring, neutral hues will be especially widespread. At Dion Lee, the timeless trench silhouette got transformed into tailored, slit-shoulder jackets and belted skirt-pants, while at Ulla Johnson and Creatures of the Wind, khaki's sometimes-utilitarian feel was nixed by nipped waists and femme ruffles.