Ether prediction: The near future.

I am analyzing and Reading alot about the situation upon us , 1st Aug hard fork of bitcoin and splitting in two and i am very concerned.
We know ether was at it's highs $413 on mid june, and than it started sliding after notable events
1) Coinbase flash crash
2) Rumors of vitalik accident ( if you guys know)
3) The ICO scams Crypto market remain resilient whole month of July because of the june sliding and ICO dumping ethers. But still ether managed to hold $200 position because of us who still are 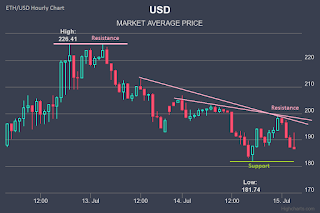 holding because i know Ether is king of Crypto currencies (suppose these people are X those are still holding) . Than there is Ether killer (EOS) the main cause of ether dumping. And don't forget about Tezos, they gathered $232 million in 14 days and Phew... anyone can tell where they are and when will they make there blockchain operational, guys are saying 4-6 months but i doubt. Alot of people around me managed to earn from daily trading of ether in exchanges but know they holds no coin due to uncertain August let suppose these people are Y. And i believe there are more Y people than X people. if i am wrong than where that $17 billion gone which was happened to be the Market Cap of Ether once. Based on my analysis i predict ether value between $290-$320 , only if ether manged to gain trust half of the Y people who were the part of ether market cap once. It is just the 1st august what is making difference. Sky is not falling, hold and stay calm. and take some advantage to buy some ether at lower price.

What to wear: outfit ideas for Christ…
Karen Wiesner: I Have Dreamed a Littl…
Vodacom buys 55% stake in Vodafone Eg…
Egg Treatment For Hair - lovelcute
Holiday home decor ideas that are bud…

Ether prediction: The near future.