Celebrating The Spirit Of Patriotism This Republic Day 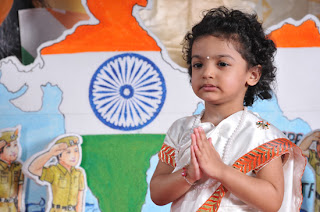 Patriotic fervor is at a high amongst Children in schools and colleges during Republic Day celebrations. 26th January, beyond doubt is one of the important days of our Indian history. It narrates the story of the time when our country gained freedom and established a truly sovereign rule by bringing our constitution into force way back in 1950 on this very day. As a result of which, India became totally a republican unit. After this significant step, dreams of our Freedom Fighters became attainable, who fought for the Independence of the country.  Ever since that, 26th January is decreed as national holiday and is celebrated with full passion and zeal across the country.
Students Revere Motherland
Republic Day celebrations in various schools across India had one thing in common - feeling of patriotic zest on this occasion. At Presidium Senior Secondary School also, the celebration was at a full swing. Spreading the message of love and peace, children came to the school adorning costumes of freedom fighters and carried national flags in their hands. 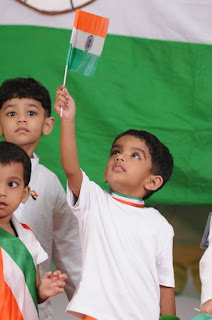 The day began with flag hoisting ceremony which was followed by the national anthem. Teachers explained to the students’ significance of the day and made them aware of various aspects of India and its cultural heritage. During the assembly, students participated in the march past with gusto and short speech was delivered to them elucidating importance of Republic Day parade held at India gate annually.
Children sung popular patriotic numbers like - "Nanha Munna Rahi Hoon", "Ae Watan, Ae Watan, Humko Teri Kasam” etc. They also shared their views about their country in a class discussion thereafter.

The school premises were beautifully decorated with balloons of tri-color, small flags and flowers spreading the aura of patriotism. The continuous patriotic music in the background added to the flavor.  Altogether, the whole school came alive with the spirit of nationalism.
It was a wonderful way to celebrate Republic Day as our future leaders were educated about our country’s rich heritage and history!

Celebrating The Spirit Of Patriotism This Republic Day