Honduras is a country full of rich culture, friendly faces and delectable food. Yet poverty, corruption, crime and injustice leave Hondurans with lack of hope, forcing them to find it elsewhere.

In October 2018, groups of Honduran families, young adults, and single mothers all collectively created a caravan to travel together for mutual protection through hostile regions. Their goal was to reach the United States.

The group aided one another and received help from generous people who lived alongside the borders of Honduras, Guatemala and Mexico. The continuous exhaustion of misrepresentation and ignorance from their government motivated about 4,000 Migrants to travel to the U.S. They still had to face border patrol, gangs who smuggle drugs within these borders and harsh weather.

The devastating corruption, poverty, gang violence and lack of opportunity in their home country led migrants to take the harsh journey to the U.S.

In 2020, Transparency International ranked Honduras among the world’s most corrupt countries — 157 out of 180 countries. That’s slightly ahead of the Dominican Republic, Guatemala and Nigeria, but far worse than South Africa, Brazil and Mexico. 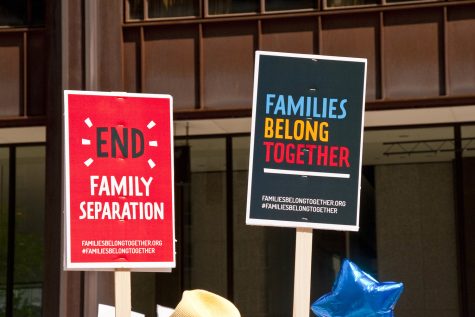 March for Immigrants in Chicago, Illinois on June 30, 2018. (Courtesy of Charles Edward Miller)

Expecting anyone to live in these harsh conditions is inhumane. Crossing international borders, including those of Honduras, Guatemala, Mexico and the U.S., is dangerous for many reasons. However, creating a caravan felt like the safest decision for migrants.

The dangers arise from all aspects. From the extensive stress of leaving your home country, to having to hide from drug lords and robbers that take advantage of the circumstances. On top of this comes dehydration, exhaustion from walking and lack of sleep.

“People know there are risks with big magnitudes,” said Roney Giron, a Honduran migrant who crossed to the U.S. in the 2018 caravan. “They take the risk because of the economic situation in our countries where there is so much corruption, and there’s fear, but we don’t see them as obstacles.”

Giron was part of the “Via Crucis del Migrante” journey, also known as the “Central American caravan.” The group consisted mainly of mothers and their children, who crossed multiple borders on foot.

A key concern for migrants when crossing Mexico is to make the journey without attracting attention from border patrol. As a result, they have to face organized gangs that smuggle drugs alongside migrants. Many end up sexually and physically abused.

Having to walk in heavily drug-affiliated zones is terrifying and unavoidable. Forcing those crossing to be discreet, in hopes of passing this area alive. Many end up dead or kidnapped for ransom money.

“It’s a journey with a lot of problems,” Giron said. “There are a lot of gangs and mafias that take advantage of the people migrating because for them, we’re like gold, and they look for it even with a magnifying glass if it’s possible.”

Grouping together and uniting their spirits drove migrants to cross to the U.S. They did not just fear the dangers of the road, but also border patrol in multiple countries.

Guatemala, Honduras, Mexico and the U.S. all agreed to stop the caravan and transport Hondurans back home. Then-President Donald Trump’s criticism of the caravan followed this decision. On Oct. 18, 2018, he tweeted: “In addition to stopping all payments to these countries, which seem to have almost no control over their population, I must, in the strongest of terms, ask Mexico to stop this onslaught — and if unable to do, so I will call up the U.S. Military and CLOSE OUR SOUTHERN BORDER!”

The lack of empathy in his comments is quite disappointing. Migrants have to face terrible conditions at home, on their journey to the U.S. and even after they have reached their destination.

Their situation may seem better in the U.S. because they are able to get away from gang violence and extensive corruption.

Yet, discrimination and lack of health care leads to a different stress. In Honduras, most of the health care services are in urban areas. This excludes the needs of indigenous groups.

A 2019 study funded by the National Institutes of Health found that discrimination, ‘‘gets under the skin as an acute and chronic stressor that activates physiological responses, such as elevated blood pressure, heart rate, and cortisol secretions, that trigger declines in mental and physical health.”

The consistent anguish is devastating. To experience horrible living conditions in their homeland to discrimination in a new country creates lasting negative effects.

Migrants continuously deal with multiple stressors. This includes having to leave their homes because of insufferable conditions, then coming to the U.S. to face more obstacles.

Many migrants have to leave their families behind and become the breadwinner of their household, sending money back home to support loved ones.

Finding stress on every border defines our societal attitudes toward migrants. The lack of help and social acceptance affects how migrants cultivate into their new society.

Socially accepting migrants is the least we can do to help, but there are multiple ways we can try to make a difference.

Foremost, stay informed about immigration. Make sure the information is credible and fact checked, as misinformation can cause us to create false assumptions.

From a political standpoint, the government should offer funds and provide for migrant mental health support. Offering therapy, health care, and funding programs specifically targeted at helping migrants transition into the U.S. in hopes of alleviating the mental anguish and exhaustion it takes to cross the border.