"You know I never believed in love or believed one day that you would come along...and free me."

-  The One by Kodaline
Hi.
So this afternoon I watched Kalyeserye, per usual, and it was a special episode celebrating ALDUB's 6th monthsary (monthsary = monthly anniversary). Now before you roll your eyes, this isn't an Aldub entry. I just had to mention it because it was the first time I actually caught myself getting really giddy...as in squirming-on-the-sofa giddy. Parang teenager ulit.
It seems I'm living my love story -- or lack thereof -- through AlDub. Mine's a book with empty pages, so why not just jump in on someone else's magic carpet ride, right? I think Maine and Alden must have won a war in their past lives or something to be rewarded with this kind of fate. Just how many people can claim to have found their soulmate, signs and all? While most people need to go out and find "the one," Maine had Alden delivered right at her doorstep (and vice versa)...like those babies carried by storks in cartoon shows. It's as if destiny was telling the world, "Yes, I exist. Just look at what I did to AlDub."
Yeah well, so... that said... where is mine?
Did I miss something?
May seminar ba akong hindi na-attendan?
Ang sagwa na ba talaga ng itsura ko? (Don't answer that.)

People tell me baka choosy daw ako. WOW (wala na bang mas malaking font?), gandang-ganda naman sila sakin. Hahaha! Ganito kasi yon, as far as I know ha, you need choices to be choosy. Yun lang. I rest my case.
Some friends told me I have trust issues. Medyo judgmental lang ano? :) But yeah, in a world where broken families abound, one can't help but to form some kind of defense mechanism. I admit that as much as I anticipate the bliss of romance, I am skeptical about long-term commitments, i.e., marriage. When my mom pesters me into getting married (married na agad, wala nang boyfriend-boyfriend), I always respond with, "What makes one so sure that of all the relationships s/he has been in, this current one will last 'until death?'" "Is a marriage contract some kind of magic wand that assures loyalty?" I DON'T THINK SO. At least, not anymore.

Not that I'm not willing to compromise, but when things get shaky, it's the girl who loses so much more than the guy. At least, that's what I've seen with the couples I know (not just in movies). Come to think of it, I think the fear comes from witnessing relationships around me crack and eventually fall apart (hindi kaya ako ang malas sa kanila?). Honestly, the last married couple that I thought really pulled through were my deceased grandparents (mama's side). My lola was the first to have passed away, and I watched my lolo as he visited her grave. I really felt that he still loved and missed her. It's so rare to see that now. I think that kind of love and fidelity ended with their generation or something.

Aside from the lack of trust, there's also the lack of self-confidence. I don't think I have what it takes to start a relationship, let alone keep it afloat.  Contrary to what my pareng Tom Cruise said, I don't believe that someone should "complete" you.  Instead, you should make yourself whole, so you can completely give yourself to someone. Naks, diba. May ganyan akong nalalaman.

But that's the problem. I'm an empty shell, so there's nothing to complete. When I was younger I would always make a mental list of what my boyfriend should be like. But as I matured (matured daw oh!) I started to question whether I could be someone's ideal girl. And the answer is...

ASA PA. If God finally gives the right person (the operative word is "IF"), I would want to also give him the best kind of love he deserves. But with all my issues in life, I fear that I'll be ruining it from day 1. Remember my previous post about John Lennon's song that goes, "How can I give love when I just don't know how to give?" Yun. Yun mismo. What I'm actually apprehensive about, is that I just might hurt him more than I can make him happy.

That's why I never liked ligawan stages...yung pa-cute-cute? Please lang. That's his best foot forward. Doon tayo sa other foot. Doon talaga nagkakaalaman. In romantic movies, I'm drawn to plots where the leads are good friends first which just later bloom into something more (e.g., Love, Rosie). That way, you both know at least 80% of each other's baho. No pretensions. Tipong, show me your kili-kili and I'll show you mine. LOL. So medyo matagal na proseso pala ito. If my calculations are correct, I'll be married when I'm 60 (if I live through it). Perfect!

Anyway, so there. These are some of the reasons why I'm just riding on AlDub's love story to satisfy my own longing (longing talaga?). In the end, I actually [kind of] have an idea why I'm unattached. But I still believe he's out there somewhere. The person to whom I'll sing Kodaline's "The One" for. Busy lang si Destiny sa AlDub ngayon. So after nila siguro, kami na. Tiwala lang. Hahaha! I'm [still] not in a hurry. No pressure. Up to 60 years old nga ang deadline diba? I can wait for the man who can make me believe in forever. YUCK, jume-James Reid. As I always tell my friends, natraffic lang siya sa Paris. LOL. Well, if we will really get together when we're 60 y.o., forever na nga naman talaga kasi afterlife na ang kasunod. But like they say, "Unless it's mad, passionate, extraordinary love, it's a waste of your time."

So until then, I'll devote my life to getting rich. Para may Plan B. Or becoming a superstar. Pang Plan C. LOL.

Let me end this incredibly long entry with Kodaline and two (2) of Lang Leav's new pieces. See below.

Good night and I hope I entertained you. ;) 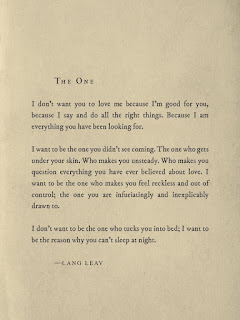 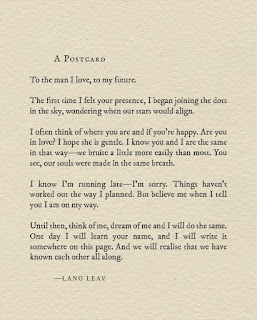