A visit to the best Moorish Monuments in Malaga

on
22.08.2015
I have two big passions in life: travelling and history.
Since I've always been fascinated by the Moorish culture, last summer I went to Malaga, an amazing Spanish city located in the Andalusia region. This is the reason I wanted to see and write about the Moorish Monuments in Malaga. I searched on Skyscanner a cheap flight and then I started looking for a hotel in the centre of Malaga close to the sites I wanted to visit. Once settled these matters, I was happy like a child: in Andalusia you can find most of the monuments that the Moors left us.
Maybe you don't know that, even if the word Moor is now used to refer to all Muslims, this word comes from the Latin “Mauri” which is the name for the Berber tribes living in Algeria and Morocco.
In 711 the Islamic Moors crossed the Strait of Gibraltar and conquered most of the Iberian Peninsula, except for north-western area. They gave their territory the name Al-Andalus, which at its peak included most of modern Spain, Septimania and Portugal.
The Moors ruled parts of Andalucia for 800 years and their influences can be found today in the Spanish culture, language and architecture. In addition, the Arabs transmitted their great knowledge to the locals and introduced in these territories a sophisticated irrigation system with a complex network of wells and channels which brought water into the very heart of buildings.
Among the surviving examples in Malaga I visited the Alcazaba and Gibralfaro in Malaga.
Alcazaba of Málaga
Built by the Hammudid dynasty in the 11th century, the Alcazaba is one of the best preserved palatial fortification in Spain. The word alcazaba comes from the Arabic al-qasbah, قصبة and means citadel. 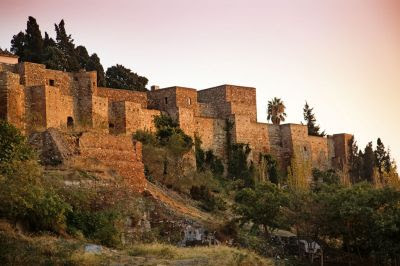 Photo: jeronimoalba.com.
Next to the entrance of the Alcazaba you can find the remains of a 2nd century Roman amphitheatre. Part of the materials used for the amphitheatre were reused in constructing the Alcazaba.
The main entrance to the Alcazaba is a gateway called "Puerta de la Boveda" (Vault Gate). The entrance gate doubles back on itself, in order to make progress difficult for attacking forces. The pathway goes through magnificent gardens with fountains and labyrinth passages: believe me, this place is magical!
The inner citadel can only be accessed through the “Puerta de los Cuartos de Granada” (Gate of the Granada Quarters) which was constructed in order to defend the western part of the palace. Inside the second wall you can admire the Palace and other dwelling of the 11th, 13th and 14th centuries.
Here you can admire also an Archaeological Museum which hosts many Moorish and Phoenician finds.
Opening Hours:
Tuesday to Sunday
Summer: 9.30am to 8pm
Winter: 8.30am to 7.30 pm (last admission 19.00)
Mondays 9.00am to 6.00 pm
Closed 1 Jan, 28 Feb & 25 Dec.
Admission Fees:
Normal: 2.20 euros
Reduced (Malaga residents, children aged 6-16, students): 0.60 euro.
The Castle of Gibralfaro
I also took the opportunity to visit the beautiful Castillo de Gibralfaro (Castle of Gibralfaro) whose construction dates back to the 10th century.
There are 2 options for reaching this interesting site: by bus or on foot. I chose the second one: I took the scenic Paseo Don Juan de Temboury, to the south of the Alcazaba. It was a long walk, that it might be difficult on a hot day but it surely worth it.
Alternatively, you can take bus 35 from Avenida de Cervantes to reach the castle. 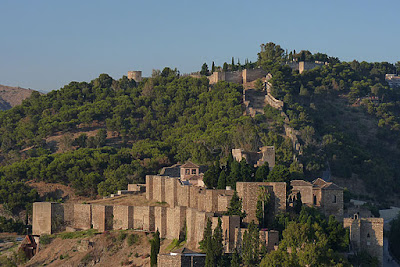 Photo: skyscanner.net.
The name Gibralfaro derives from the the Phoenician word gebel-faro that means "rock of the lighthouse". In fact, the Castle was built in 929AD on a former Phoenician lighthouse.
Built by the Caliph of Cordoba Abd-al-Rahman III, the Sultan of Granada, Yusef I, who reigned between 1333 and 1354, enlarged the building adding the double wall down to Alcazaba. The fortress was used for military uses until 1925.
Even if the Castle of Gibralfaro has deteriorated over the years, in this historic monument are still visible the walls, which have been restored so that you can walk round them. Located on a high hill, from this fortress you can enjoy a magnificent view of the sea and city of Malaga.
Apart from the rampart, there's the Torre Blanca, a large tower and the airon Well carved out if the rock. The well is 40 metres deep.
Near the entrance of the Castle is located the Centro de Interpretación de Gibralfaro, a military museum where you can see uniforms, arms and objects used in the past as well as some information about how the fortress was used over the years. It’s a little museum but very interesting, don’t miss it!
Opening hours:
Tuesday to Sunday
Summer: 9 am to 8pm
Winter: 9am to 6pm
Closed 1 Jan, 28 Feb & 25 Dec.
Admission fees:
Normal: 2.20 euros
Reduced: 0.60 euro.
P.S If you are interested in visiting these two masterpieces of Moorish art in Malaga, I recommend buying the joint ticket for both the Gibralfaro and Alcazaba to save money.
See the area!