The month of May is one of my absolute favourite times to be in Andalusia. Not only do we celebrate the Crosses of May but Oranges trees along the streets are in blossom, the scent of orange blossom hangs in the air. Plants and flowers all are lush and green. The weather begins to get warmer and the days are longer.

Going the long way can be shorter
Hey You, Finish 2019 Strong
Why B.B.’s is the King of BBQ in Kans…
Calm by Wellness CBD Review
Ripple’s Comment on the Present Scen…

Straight after Easter the Festival of the Crosses of May comes along each May 3rd. Most places begin the May Crosses celebrations on May bank holiday, 1st May. This festivity reminds me of the traditional well dressings in Derbyshire. Floral decorations outdoors to celebrate springtime.

It´s not clear how this festival originated in Spain, but clearly the Pagan May Day celebrations must influenced somehow. May festivities date back to Roman times. The Cross of Saint Helen is connected to this celebration. As the legend goes Saint Helen was sent by her son Constantine to find the Holy Cross. Supposedly part of the wooden cross was found on the 3rd of May which is why we celebrate on this day.

In Andalusia you can find crosses in all of the provinces. I can highly recommend the Crosses in Almeria, Granada and Cordoba especially I have visited these ones myself. This tradition spreads across all of Spain and even in some South American countries too. This photo below is a cross in Almeria city. 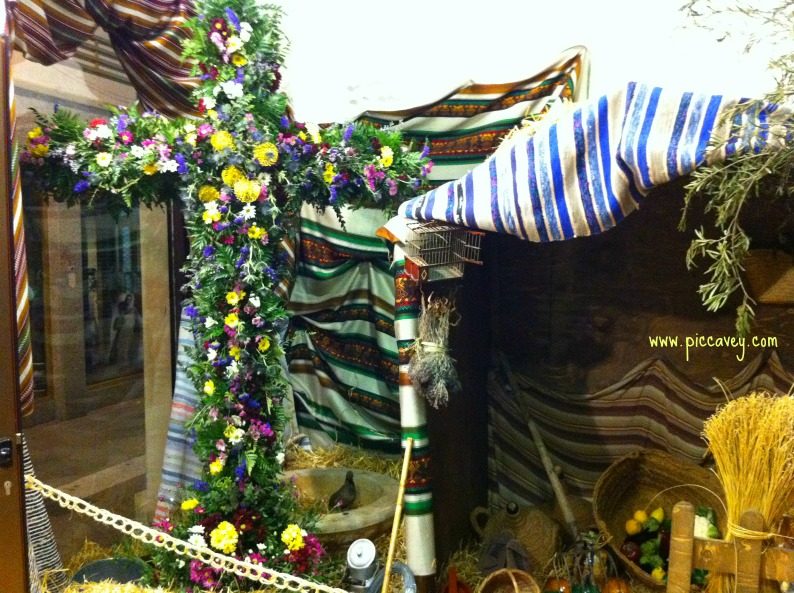 In Cordoba the Crosses of May celebration is combined with the Cordoba Patios competition. Usually 25 crosses take part and over 50 patios are decorated with ceramic painted plant pots and brightly coloured geraniums and spring flowers. In 2012 the festival runs from 2nd to 13th of May. You can also head to Jaén or Ubeda where the festivities are also popular. In Malaga and in Almeria the crosses are located in places around the city centre. In some larger towns there can be over 40 different ones to see. They are easy to locate as there are always people around them. 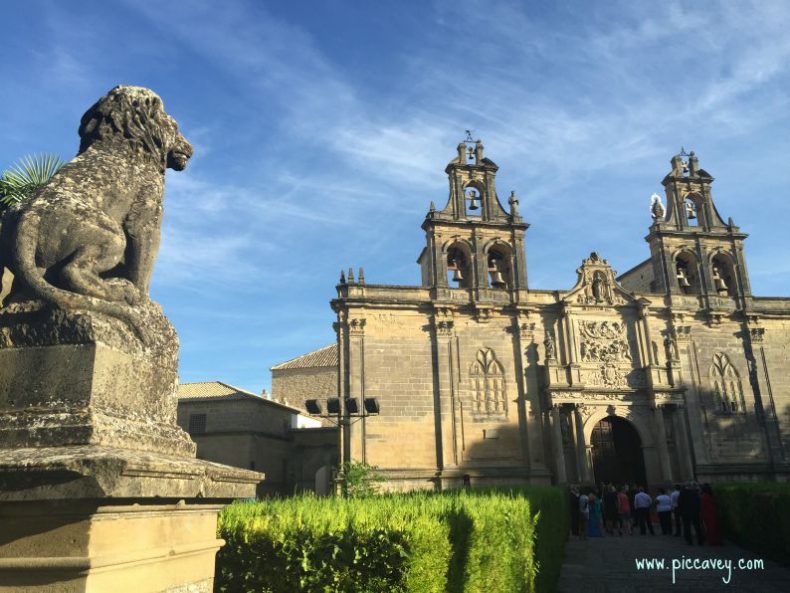 In Cádiz the crosses are celebrated with evening verbenas and often patios are decorated in flowers also in nearby El Puerto de Santa María across the water. The Cruz de Mayo of San Pedro in Huelva is notable but there are others in Huelva province such as Rociana del Condado or in Bonares. In Seville the festival is still celebrated and in nearby Ecija where the children carry crosses along in processions. 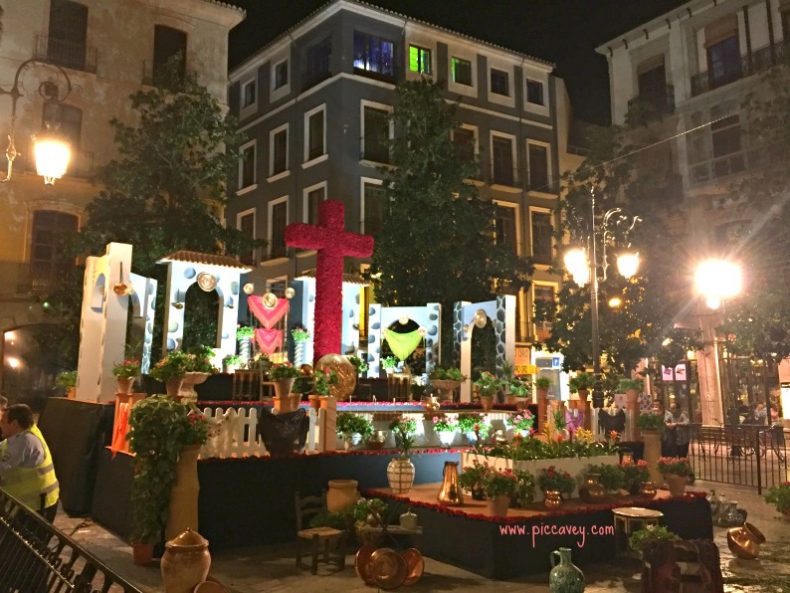 In Granada  the city has just under 100 crosses set up around the different squares and patios. There are also events happening for on the weekend next to the 3rd of May. A competition is run by the town hall for the best cross display. There are also decorated balconies that are awarded prizes too. There are often culinary activities and of course there´s dancing and singing too. The Albaicin and Realejo are good areas to see the crosses, as well as the historic city centre.

Traditional food such as migas and broad beans are typical and Sevillana dancing or Rocio choirs can be spotted around the city too.  Sometimes you see children dressed in typical Andalusian dress. They have a small portable floral cross. Boys wear striped trousers, braces and a cummerband and a Cordobes hat, girls wear flamenco style dresses and flowers in their hair. They ask for money (like penny for the guy in UK on bonfire night) they say Give me a Chavico for the cross, the chavico is an old name for a small coin at the beginning of the 1900’s.

Other places to check out the crosses in Granada are Almuñécar, Armilla which is  just outside the city to the south, Baza and Motril. In Motril which is a sea port, the festivities coincide with the Feria Chica (Little fair) and are declared National Touristic interest.

See full list of Crosses of May in Spain here .> 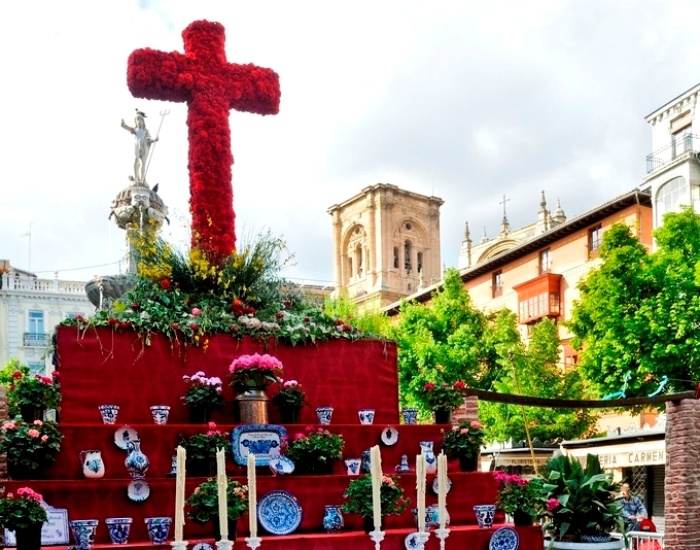 The crosses are usually quite tall and are decorated with red or white carnations or a mixture of flowers. They include local ceramics, embroidered shawls, shiny copper pots, candles and anything representing the local traditions. Adorning the area around the cross in an eye catching display. As this is a competition, naturally the onlookers comment on the flowers and the design of the display.

Don´t miss the apple right at the bottom of the display. This apple has scissors sticking out of it. This is to avoid people gossiping and saying  ¨it´s really nice but they could have made it bigger, the flowers could have been prettier….¨.

The explanation behind this is that the apple is also known as ´pero´ in Granada slang which means but in Spanish.  So it the scissors are cutting the buts out, there are no buts. People can´t criticise the cross display as it already has the but there. (difficult to comprehend and explain if you dont speak Spanish perhaps)

In the Valley of Lecrin, in the village of Pinos del Valle they celebrate a week of fiesta for the Crosses of May, they are dedicated to Santo Cristo del Zapato (Christ Saint of the Shoe….yes really) The celebrations include activities for children, firework displays, bike rides and chocolate with churros.

Then there dancing in the evenings on the village square, great if you like to dance tango or the Paso doble ; ) One main festival day they make a huge Paella for all the neighbours probably over 1200 people and everyone has lunch together outside.There are processions around the village with a marching band and majorettes. Cars and tractors pulling carriages decorated with crosses and flowers make up part of the procession. The women wear typical flamenco style dresses and it´s a colourful display to see, welcoming the Spanish Springtime. Often there are firework displays which close the weeks festivities but in the daytime to accompany the procession there are often bangers or rockets to make sure you know that there is something going on. Granada city there used to be a temporary bar set up near to the Cross by each group of neighbours but a few years ago this was regulated by the authorities and drinking on the street isnt allowed now during the week of the crosses festival. There is still a busy atmosphere around the city with people having tapas and beers while walking around to see the crosses displayed around the city.

The post May Crosses – Spring festival in Granada & Almeria appeared first on Piccavey.