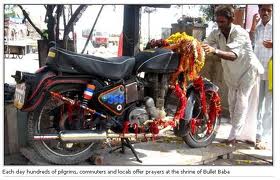 It's hard to miss the din of pilgrims here. Every day nearby villagers and travelers stop and pray to the bike and its late owner Om Singh. The temple beside the Enfield motorbike has a big picture of Singh, fondly known as Om Bana.

It is said that a person who does not stop to pray at the shrine is in for a dangerous journey.

The story goes that about 21 years ago, on a fateful summer night, Om Bana was returning from Pali to his native Chotila on his bike when it skidded and hit a tree, killing him on the spot.

The tree stands over the battered vehicle till date. Villagers say after Om Bana's death, the motorbike was taken to a local police station. But next day morning, it was found at the accident spot. 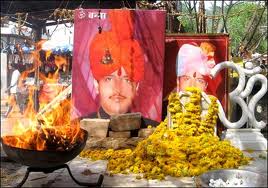 Police initially thought it was a prank and after emptying the fuel tank they brought the bike back to the station. However, the motorcycle was again at the accident spot the next day.

The temple has a priest who manages daily affairs. Many shops offering incense sticks, flowers, coconut and red thread meant for offering prayers have sprung up near the shrine.

Local people sing folk songs in the name of Om Bana who owned the Royal Enfield.

Travelers, especially drivers of vehicles that pass by, offer prayers at the site, which is almost in the middle of the road.

Some drivers also offer a small bottle of country liquor at the site, praying for a safe journey. "Whenever I pass this area, I never forget to light incense sticks, offer liquor and lie prostrate in reverence," said Jagdish Singh, a taxi driver.

Devotees also apply the 'tilak' mark and tie a red thread on the motorbike.

"Villagers here believe Bana's spirit still hovers around the place and they can hear the Royal Enfield rev up at night," said Hem Singh Rajput, the resident of a nearby village.