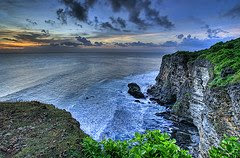 Uluwatu proper is a small village on the west coast, south of Jimbaran, but for most visitors it refers only to the famous temple of the same name, several kilometers further south. Many people also use it to refer to the area south of Jimbaran. The entire area is also called the Bukit Peninsula or just The Bukit, while Pecatu (peh-CHA-tuh) refers to a small village inland.

HOW TO REACH ULUWATU

A taxi from Kuta to Uluwatu takes about 30 minutes up and down winding roads and will cost about Rp 50,000 one-way. As it can be difficult to find transport, get the driver to wait for you for the trip back (figure on Rp 10,000/hour). Joining a tour can be cheaper way of getting to Uluwatu.

If you are riding a rented motorcycle from Kuta, be aware that you need an IDR (International Driving Permit). Police perform frequent checks for driving licenses on the road between Kuta and Uluwatu, especially targetting foreigners. If you can not present the necessary paperwork you will be faced with a fine anywhere from Rp20,000 to Rp300,000.

WHAT TO SEE AND DO AT ULUWATU 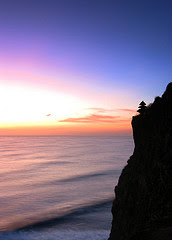 Uluwatu Temple (Pura Uluwatu) is one of Bali's six directional temples and Uluwatu's only site of significance. Though a small temple was claimed to have existed, the structure was significantly expanded by a Javanese sage, Empu Kuturan in the 11th Century. Another sage from East Java, Dang Hyang Nirartha is credited for constructing the padmasana shrines and is claimed to have attained Moksha here. More remarkable than the temple itself is its location, perched on a steep cliff 70 meters above the roaring ocean waves. There are more steep headlands on either side, and sunsets over Uluwatu are a sight to behold.

Entrance fee is Rp 3,000. As usual, you need to be properly dressed to enter and sarongs and sashes can be rented at the entrance. Guides, once famously mercenary, hassle visitors less than they used to, although they will offer to "protect" you from the monkeys, for a tip of course. Note that while you are free to walk around the temple grounds, the central courts can only be entered during special rituals.

The temple is inhabited by large number of monkeys, who are extremely adept at snatching visitors' belonging, including bags, cameras and eyeglasses. Keep a very close grip on all your belongings and stow away your eyeglasses if at all possible. If you do have something taken, the monkeys can usually be induced to exchange it for some fruit. Needless to say, rewarding the monkeys like this only encourages them to steal more. Locals and even the temple priests will be happy to do the job for you, naturally in exchange for a tip (Rp 10,000 - 50,000).

There is also a very scenic Uluwatu cave with rock formations leading into a beach close to the temple. This is a popular spot for surfers.

WHERE TO STAY AT ULUWATU

Uluwatu started life as a surfer's haven. Small bungalows close to surf points where the only options for a long time. Now the area has sprouted an impressive collection of expensive villas and resorts as well. Beware false advertising though: only the most expensive "villas" are completely Private and self-contained, while most share at least some facilities (eg. pool) and the cheapest ones are just clusters of bungalows.

All the villas listed below are standalone and feature private entrances, accommodation and their own swimming pools.