In 2020, 13 Prosecco producers are participating in National Prosecco Week join the United States. It was interesting to note that the focus of the the Prosecco DOC Consortium is on millennials and women. 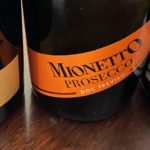 This week, July 20 to July 26, is the third annual celebration of National Prosecco Week. As Terry mentioned yesterday’s blog, on Tuesday the Prosecco DOC Consortium hosted a virtual Prosecco tasting and info session using Zoom. The host of the Zoom session was Brooke Sabel, Wine Director at Gary’s Wine & Marketplace.

In the last ten years, the Consortium has played a large role on the increased quality of Prosecco. Also, a large increase in Prosecco production has occurred since 2009. Back in 2009, 120 million bottles of Prosecco were produced. By 2019 the number of bottles had increased to 486 million bottles.

Much of the Prosecco DOCs are exported to the United Kingdom, United States, Germany and France. About 22 percent of production stays in Italy.

Among the data provided during the virtual tasting, participants learned a bit about the history of the development of Prosecco. The first production of Prosecco was in 1754. In 1970 the IGT accepted the name Prosecco. In 2009 Prosecco became Prosecco DOC.

The Prosecco DOC is located in northern Italy near Venice. The region is in Friuli Venezia Giulia and Veneto.

To be designated Prosecco, the sparkling wine must  have 85% Glera grapes. The other 15% of the grapes can be from particular varieties including:  Chardonnay, Pinots and some native grapes. The wines are produced using the Martinotti (Charmat) method for secondary fermentation.

Why and when should you drink Prosecco? Prosecco is delightful anytime. The serving temperature should be at 42° to 46° Fahrenheit.  It was suggested that Prosecco is great for breakfast, lunch or dinner.

How to Identify Prosecco and avoid fraudulently labeled Prosecco?

One of the last questions of the Zoom session was, “What to do with leftover Prosecco?” Answers included cocktails, fish, and use for a big family. For me, I’d like to have Prosecco poured over lemon sherbet!

Future of Prosecco
The concept of a rosé Prosecco is being worked on and winemakers hope to have rosé Prosecco available later in 2020. At this writing there is no rosé Prosecco on the market.

I am looking forward to tasting a rosé Prosecco when it becomes available.

Europe’s Best Oysters & What to Drink with Them

Why a Love for Prosecco Could Ruin Your Smile