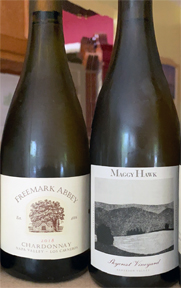 After writing about four of the six chardonnays we tasted earlier this month during an online virtual Wine tasting, we are writing about the last two wines tasted, one from Maggy Hawk and the other from Freemark Abbey. Both wineries are also part of the Jackson Family Wines. 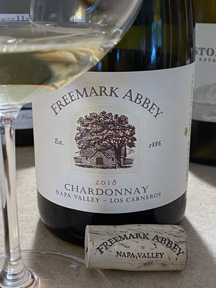 The year 1976 stands out for Freemark Abbey as the winery submitted two wines, a red and white to the well-known “The Judgment of Paris” event.

Freemark Abbey sources the grapes for its wines from special vineyards in Napa Valley.

When Freemark Abbey opens to the public again, be sure to check out the the winery’s website for more information.

Terry’s Notes: The 2018 Freemark Abbey Chardonnay Napa Valley – Los Carneros AVA had 14.5% alcohol. The wine was a yellow color. The wine offered aroma notes of apple and pear. The wine had a velvety mouthfeel and was full-bodied. The taste included citrus, apple and pear. The finish was crisp and fruity with a faint caramel and very slight heat.

Kathy’s Notes: The Freemark Abbey Chardonnay Napa Valley 2018 retails for $40.  The pale yellow wine offered a faint aroma of honeysuckle and mineral. The wine offered a rich taste with notes of flowers and spices notably baking spices. The finish had mild heat and mineral notes. The mouthfeel was smooth and the wine was full bodied. 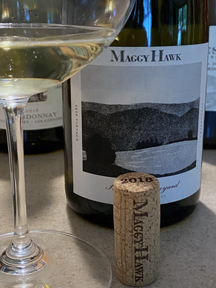 This wine was produced with 100% Chardonnay grapes from the Skycrest Vineyard. The grapes were harvested at night to protect the grapes from heat. The wine was aged for 15 months in 20% new French oak and 43% neutral puncheons. The wine was bottled in January 2020. Only 495 cases were produced.

Terry’s Notes: The Maggy Hawk Chardonnay, Skycrest Vineyard Anderson Valley AVA  retails for $55. The wine had 13.6% alcohol and was a yellow color. The aroma was of apple. The taste offered notes of citrus and green apple. The mouthfeel was silky and the wine was medium/full bodied. The finish was crisp and fruity with oak entering on the aftertaste.

Kathy’s Notes:  The grapes for this wine grow at 1700′ elevation. The wine was a pale yellow color.  The aroma was fruity with hints of citrus. The taste was fresh with mineral and light lemon.  The mouthfeel was smooth. The finish was light and the wine dried on the finish.