I gotta tell ya, this has been one of the busiest weekends ever!  Yesterday was a beautiful sunny day in the Pacific Northwest, lending itself to doing yard work and planting my little bitty garden.  I am becoming an ace at mowing the yard, but I remain afraid of the weed eater.  I just have an aversion to it and the possibilities of losing a small or large limb by way of a super speedy whirring string.

So now there are two things on my "Things That Terrify Me" list:  Weed eaters and grasshoppers.

The weekend started out with me trying a brand new recipe for a Dutch Baby.  I've never made them before, but I had bought a cast iron skillet and wanted to christen it in a very dramatic manner.  I'm not really sure how dramatic a Dutch Baby is, but I gave it my best shot.  Here's how it ended up looking:

How to stop hair fall immediately - h…
What to wear: outfit ideas for Christ…
Karen Wiesner: I Have Dreamed a Littl…
Best Things to Do in Cadaques, Beauti…
Reduce Workplace Stress and Thrive 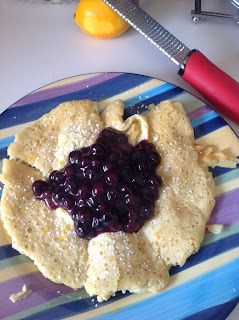 Now, I have to say right off, it didn't turn out perfect.  I should have baked it a little longer and let it get a bit more brown.  But the flavors were there for me and I don't think I'd make many changes to the recipe other than altering the baking time.  There are probably better recipes out there, but this one suited my taste buds just fine.

A Dutch Baby, for those that may want an explanation, is a type of pancake that fluffs up, and then settles back down and flattens a bit as it cools.  The recipe below is a combination of a couple of different sites' recipes, but particularly from about.com and sacredpregnancy.com.


Preheat oven to 475.  Place 10" iron skillet in the oven and let the iron skillet heat.  Meanwhile, in a mixer, whip the eggs and milk until airy and bubbly; add vanilla and combine.  Slowly add flour and mix well.

Place the 2 Tbsp of butter into the hot skillet; return to the oven and allow butter to melt.  Once melted, remove the pan, decrease the oven temperature to 425.  Roll the pan to allow the butter to coat the bottom and then pour in the cake batter.  Place in the 425 oven and cook for about 15 - 20 minutes until golden brown.

While the Dutch Baby is baking, if you want to make a blueberry sauce, you can.  You should know that it is traditional and very tasty to simply add a pat of butter, sprinkle with powdered sugar and lemon juice and eat it like that.

If you want the blueberry sauce, place blueberries, water and sugar into a sauce pan over medium heat, stirring occasionally.  Once the berries break down just slightly and the juices are a deep purple, add in the cornstarch, stirring well to combine.  After about 4-5 minutes, the cornstarch will thicken the sauce.  Set aside until the Dutch Baby is done.

After enjoying this lovely breakfast, I proceeded to go buy starter plants and get my itty bitty garden going.  It was bothering me that I was missing out on so many sunshiny opportunities that are the essence of good plant growth!  This year I stuck with just five plants.  Two tomato plants, two zucchini plants and one straight-neck yellow squash plant.  Last year I squeezed nine plants into the space I have and it was just way too crowded! 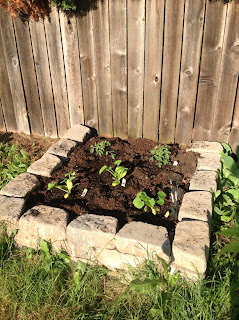 And I suppose, in a sad way, this picture is testament to my fear of the weed eater.  Uhg.

Finally, after planting the itty bitty garden and mowing the yard, Bender had a pool party, much to his delight.  And then today, I spent some time making him some very special treats that he l-o-v-e-s.  First, I bought a small container of chicken livers.  I boiled them in water for about 10 minutes, then removed them from the water and chopped them into little bite-sized pieces.  I then lined a baking dish with foil, placed the liver bits on the foil and baked them at 325 for about 2 hours, stirring about every 45 minutes or so.  After the baking time is done, I turned the oven heat off and let the livers sit in the oven while it cooled.  Super easy.

You can, if you want, toss the boiled bits in a tiny amount of garlic powder before baking them, but I didn't have garlic powder, so I skipped that step.

And while I wouldn't say it was something that appealed a great deal to my own sense of smell, the dog and both cats were all three in the kitchen with me during the boiling process.  They were definitely interested!
You can store the livers in an air tight container for up to two weeks or in the freezer for up to six months.

After the cooking process, they get quite dark and take on a more chewy texture. 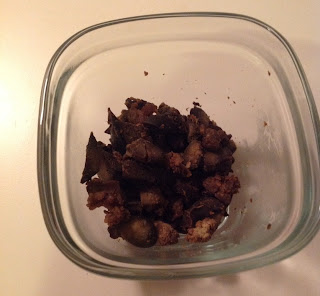 And just so you know, I got this recipe from a book I bought at the Doggie Dash (fundraiser for the Oregon Humane Society).  The book is called "Feed Your Best Friend Better" and it was written by Rick Woodford.  Rick had a booth there, and besides having some excellent recipes and tips in his book (such as some healthier kong-stuffer alternatives besides straight up peanut butter!), he was a very friendly and pleasant fella who seemed to have a true passion about dogs and their health.  I'm looking forward to trying some of his other recipes out as time allows me.  His website can be found here:  The Dog Food Dude.  I hope you'll check it out.  I feel like my little tid bit about the liver snacks didn't do him and his book justice, so really, go take a look, okay?

And, speaking of the Doggie Dash, how can I end my weekend without sharing the most embarrassingly funny picture ever?  Seriously, just when you think you're pretty hot stuff, leave it up to your best buddy to bring you back down to earth with a little jolt of "keeping it real." 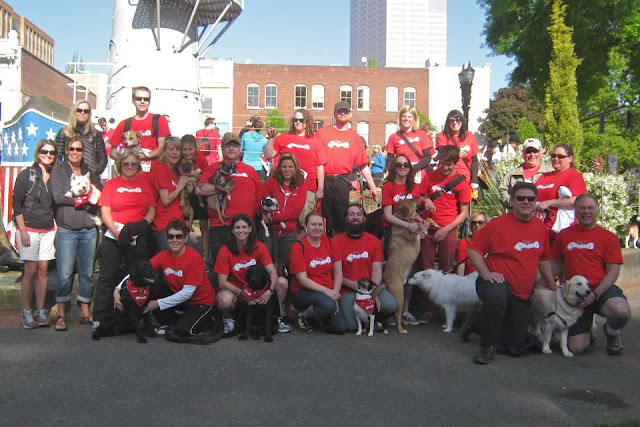 Yeah.  I'll let you figure out which one is mine.

"With the right combination of passion, fearlessness and Butter, anything is possible."- Julia Child