If you are following me on social media, you might have seen my posts on Num Noms' new releases on Christmas and boxing day - Num Noms series 3 and Num Noms Lights series 1.

We are crazy about Num Noms because they are cute, squidgy, colourful and smell delicious. They come in pairs, a Num and a Nom, with each Num belonging to a yummy category such as ice-creams, diner food and jelly beans, etc, while the Noms can be either a yummy lip gloss, cute stamp or will run wild. You can stack them on top of each other to create new flavours too.

So when we heard about the new Num Noms series, we were really excited because series 3 and Num Noms Lights comes with really exciting features! 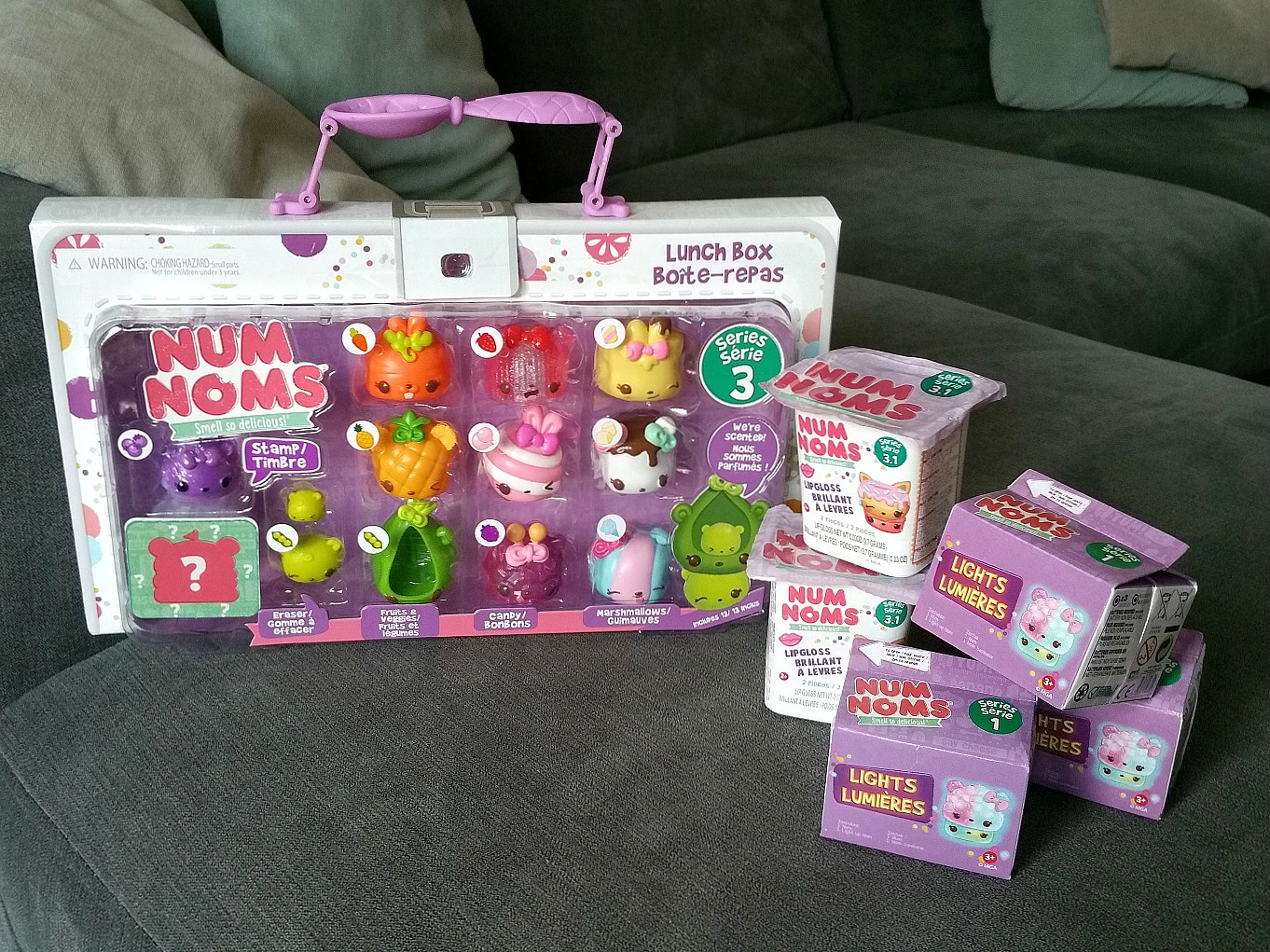 to review over Christmas time, which was perfect as we have received a Num Noms Lights series 1 mystery pack for Christmas day from the Num Noms Advent box, which after opening, made us wanted more from the new series! 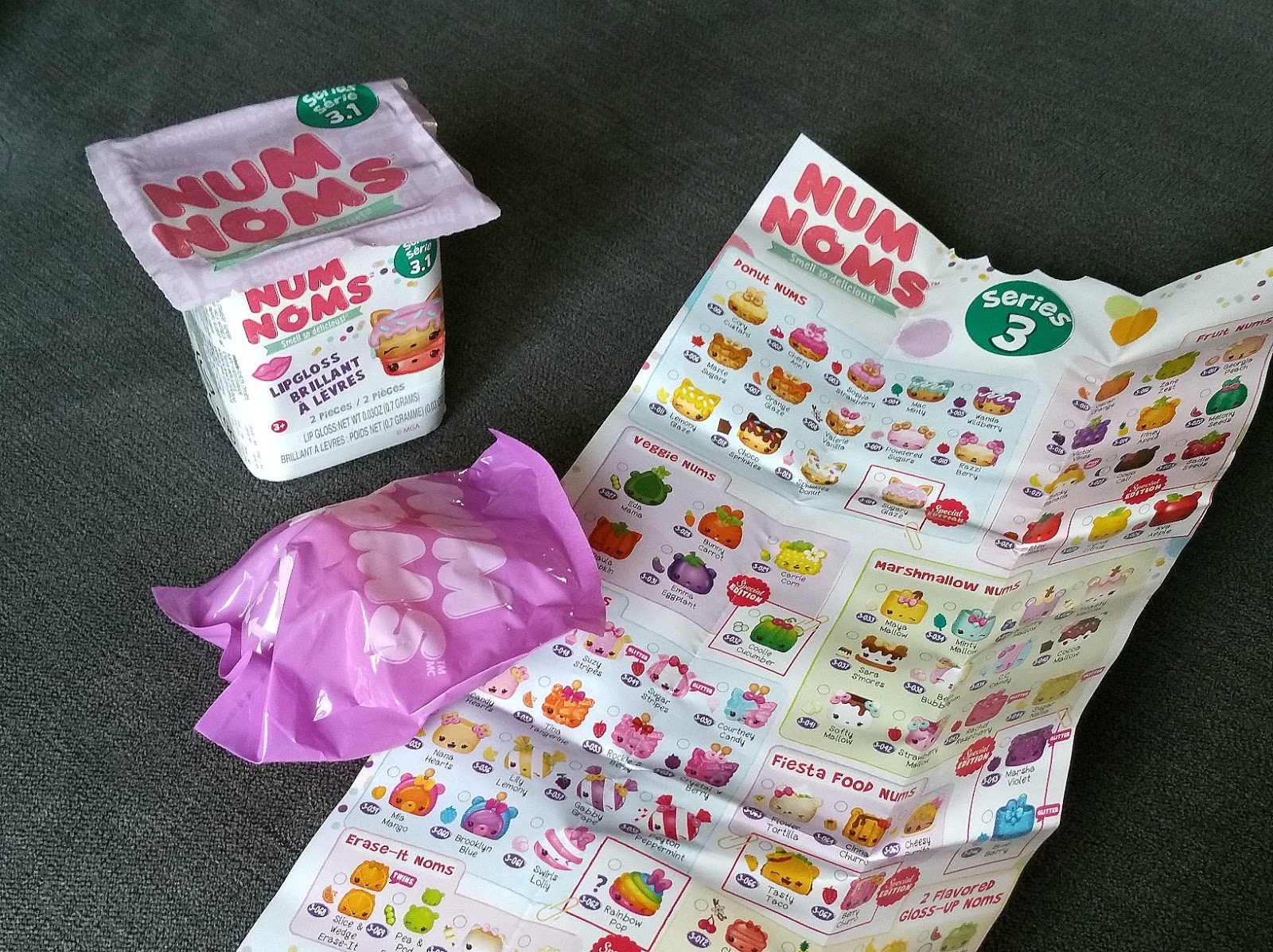 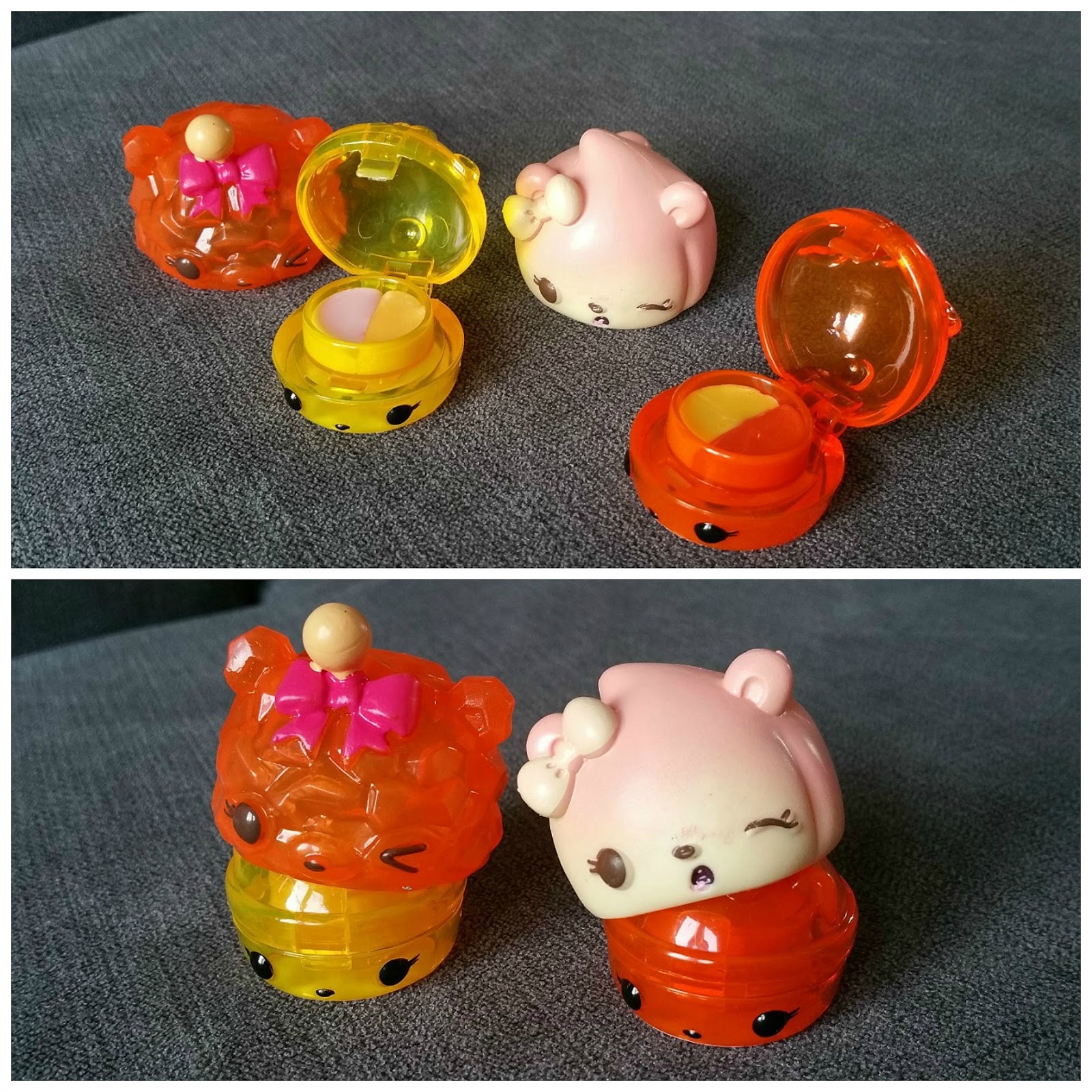 Num Noms series 3 Nums are from the following new categories: Donuts, Fruits, Veggie, Marshmallow, Candy and Fiesta food, where Noms will be either erasers, lip gloss or stamps.

Series 3 mystery pack (approximately £3 each mystery pack, suitable for 3 years+) comes with a 2-flavoured lip gloss Nom, which acts as a pencil topper as well, where as the Nums can be from any of the series 3 food groups. If you are lucky, you might find the rare Glitter Surprise Gloss-Up Nom, a rare Rainbow Pop mystery scented Candy Num, or 1 of the 2 rare glitter marshmallow Nums Masha Violet or Blue Barry!

We found Georgia Peach fruit Num in one of the mystery pack and it's my absolute favourite because I love peach flavoured sweets, and this Num smells exactly like that!

Although we didn't find the rare glitter lip gloss, the normal lip gloss Nums has a pearlescent effect and they smell yummy too! 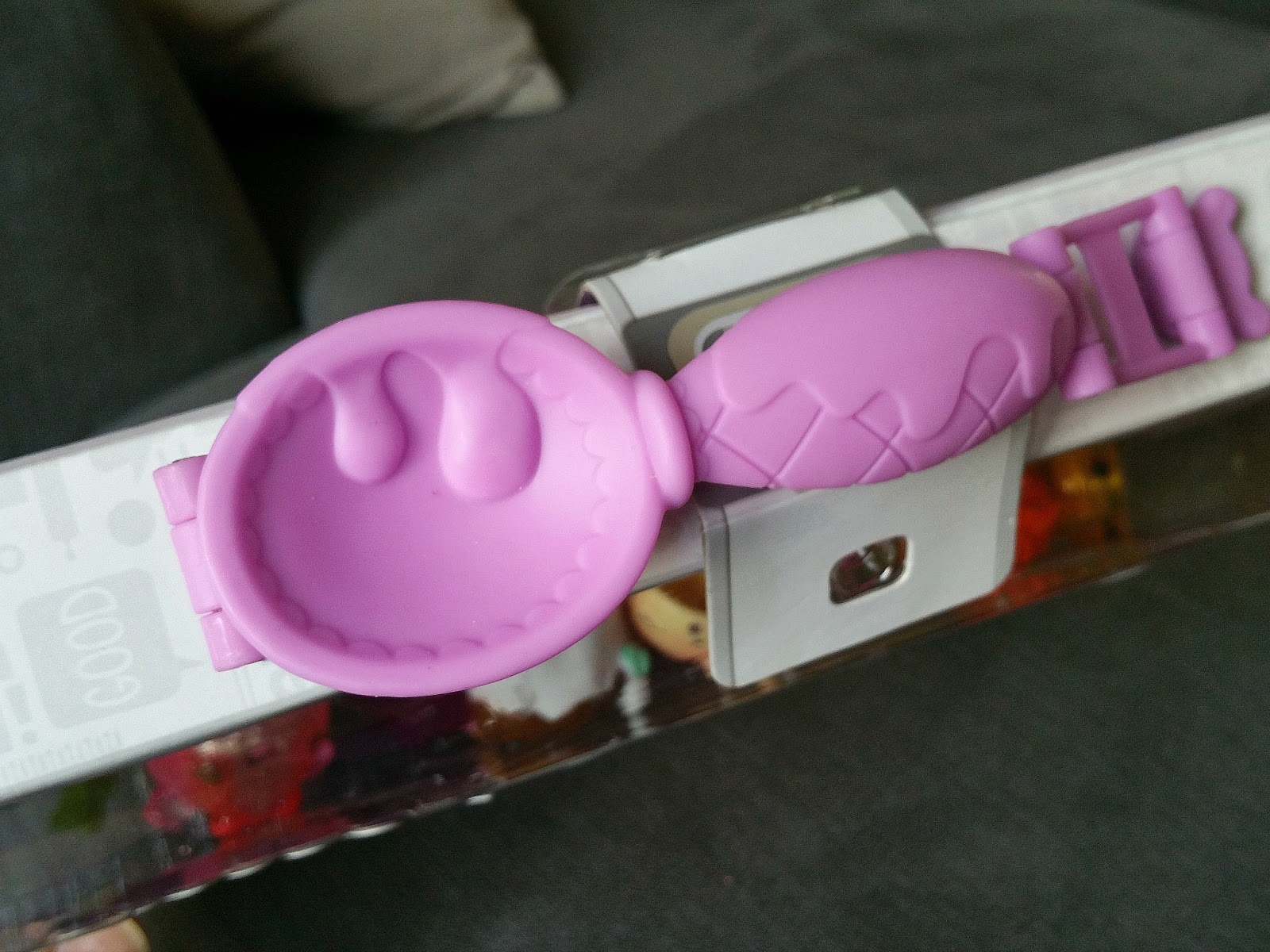 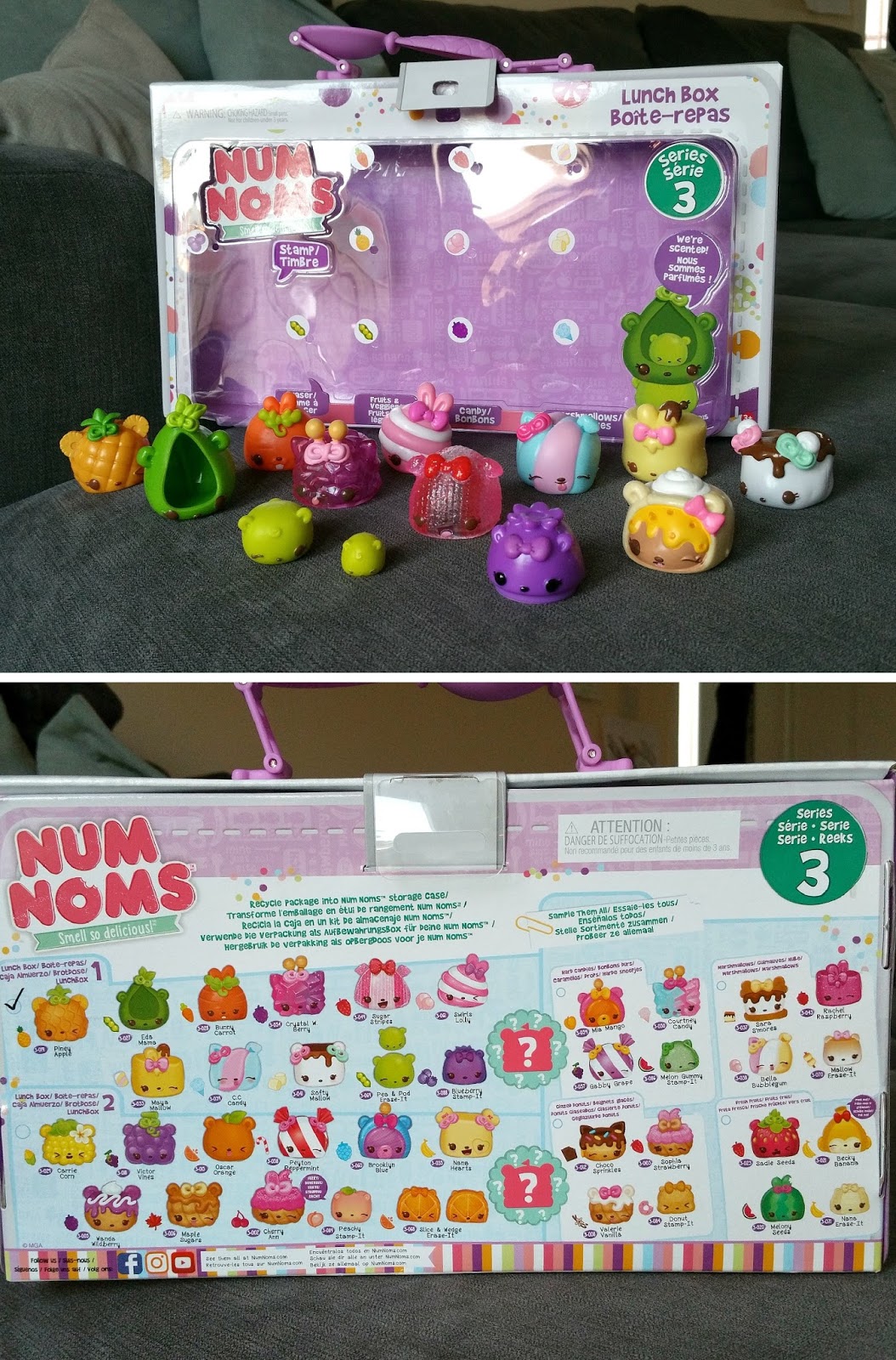 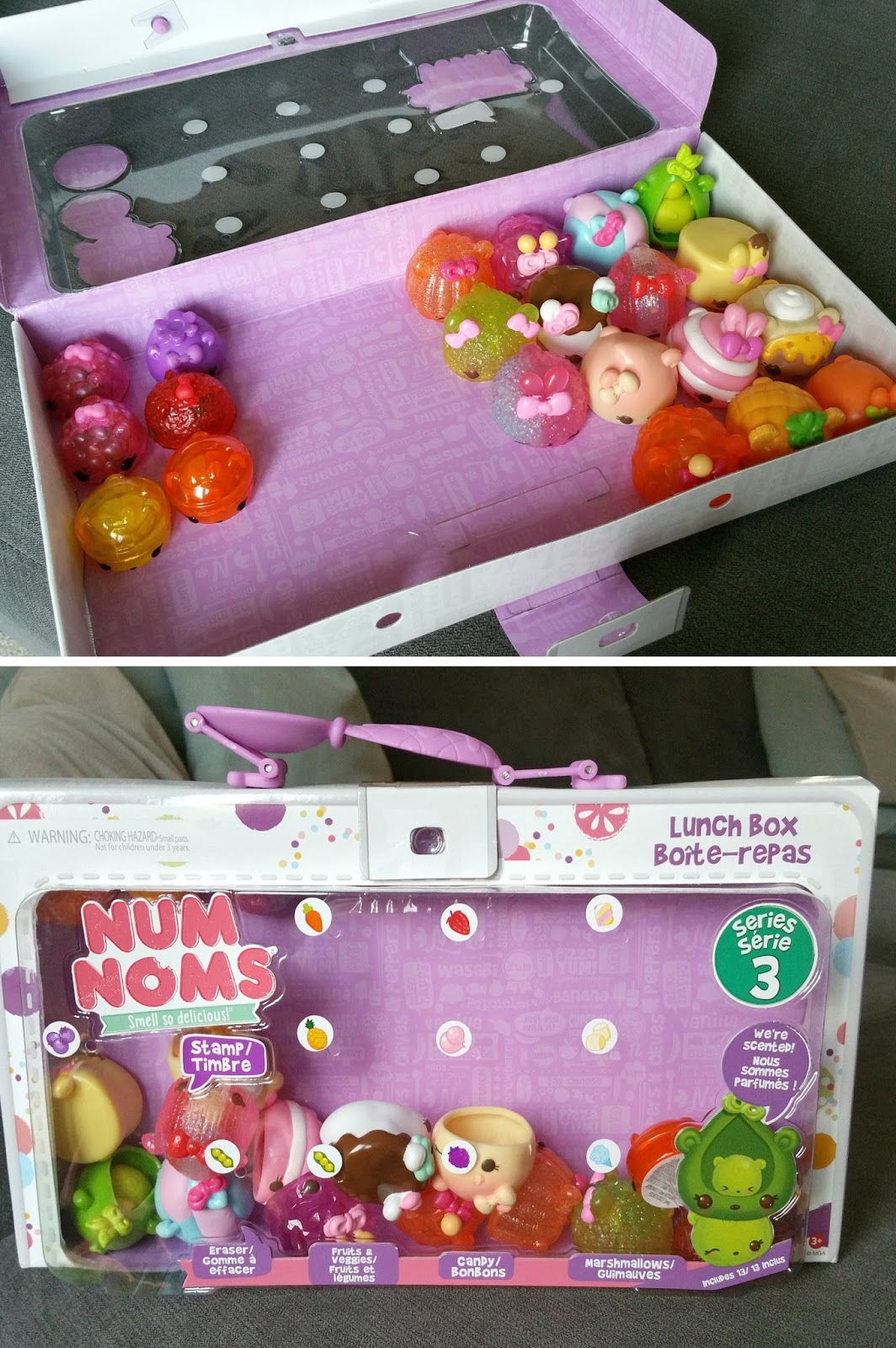 We absolutely love the Num Noms series 3 Lunch Box pack (there are 2 styles, each are approximately £18, suitable for 3 years+)! First, the lunch box itself is really cute! It has a spoon as the handle, and you can clip the box close again to use it as a storage.

And each Lunch Box Pack comes with 9 Nums, 1 mystery Num, 2 eraser Noms and 1 stamp Nom, that gives you 13 Num Noms in total!

The Num Noms included has a lot of interesting design, especially the 2 eraser Noms we received in our Lunch Box Pack - Pea & Pod, which not only stacks on top of each other, but also fit perfectly inside one of the Veggie Num - Eda Mama. That's just super cute don't you think?! I don't think we'll ever remove Pea & Pod from Eda Mama!


Apart from the extended food groups and new type of Noms, Num Noms series 3 also have other exciting merchandise coming out, including the Surprise in a Jar Num Noms plush! I can't wait for more news about them! 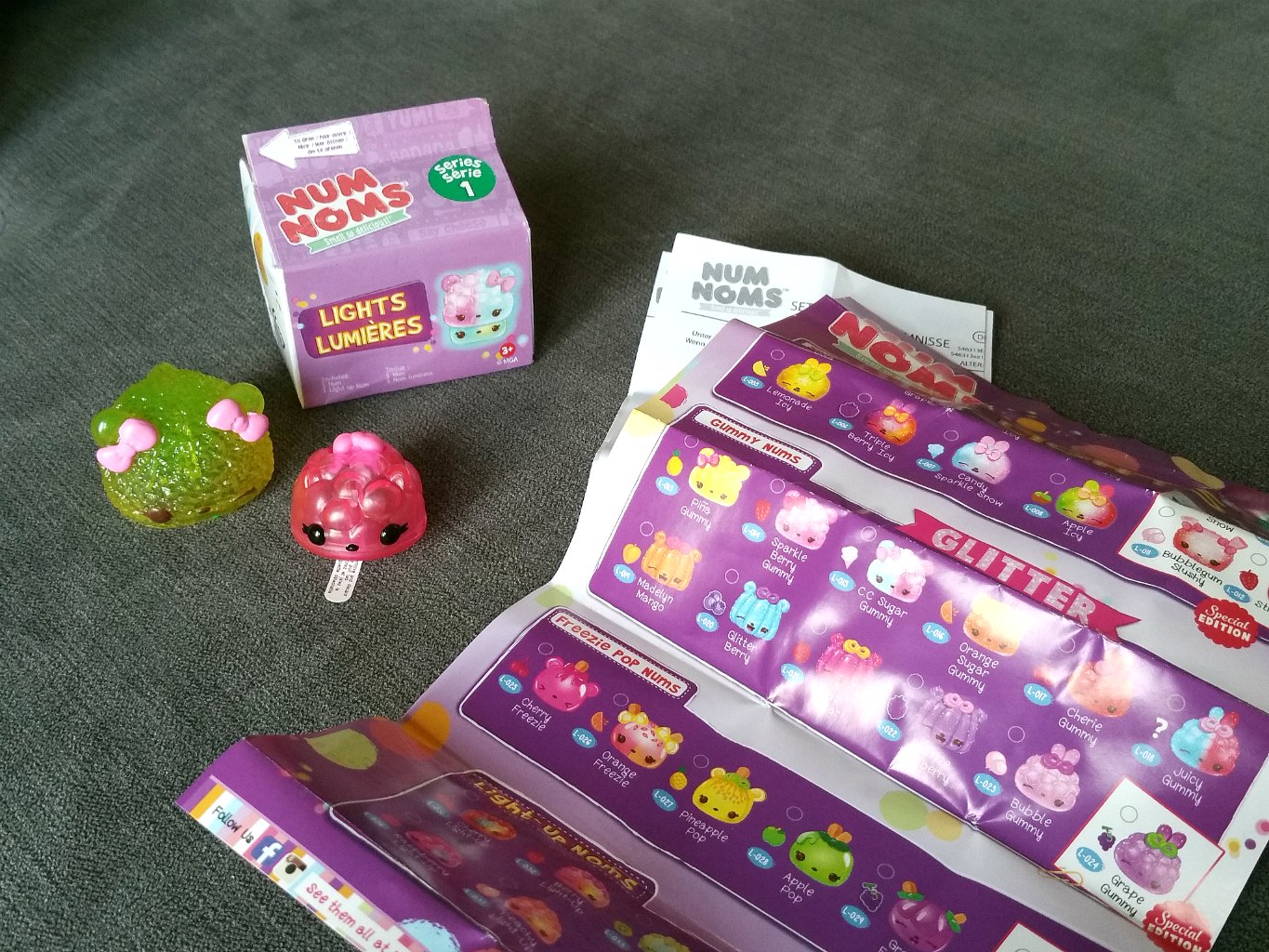 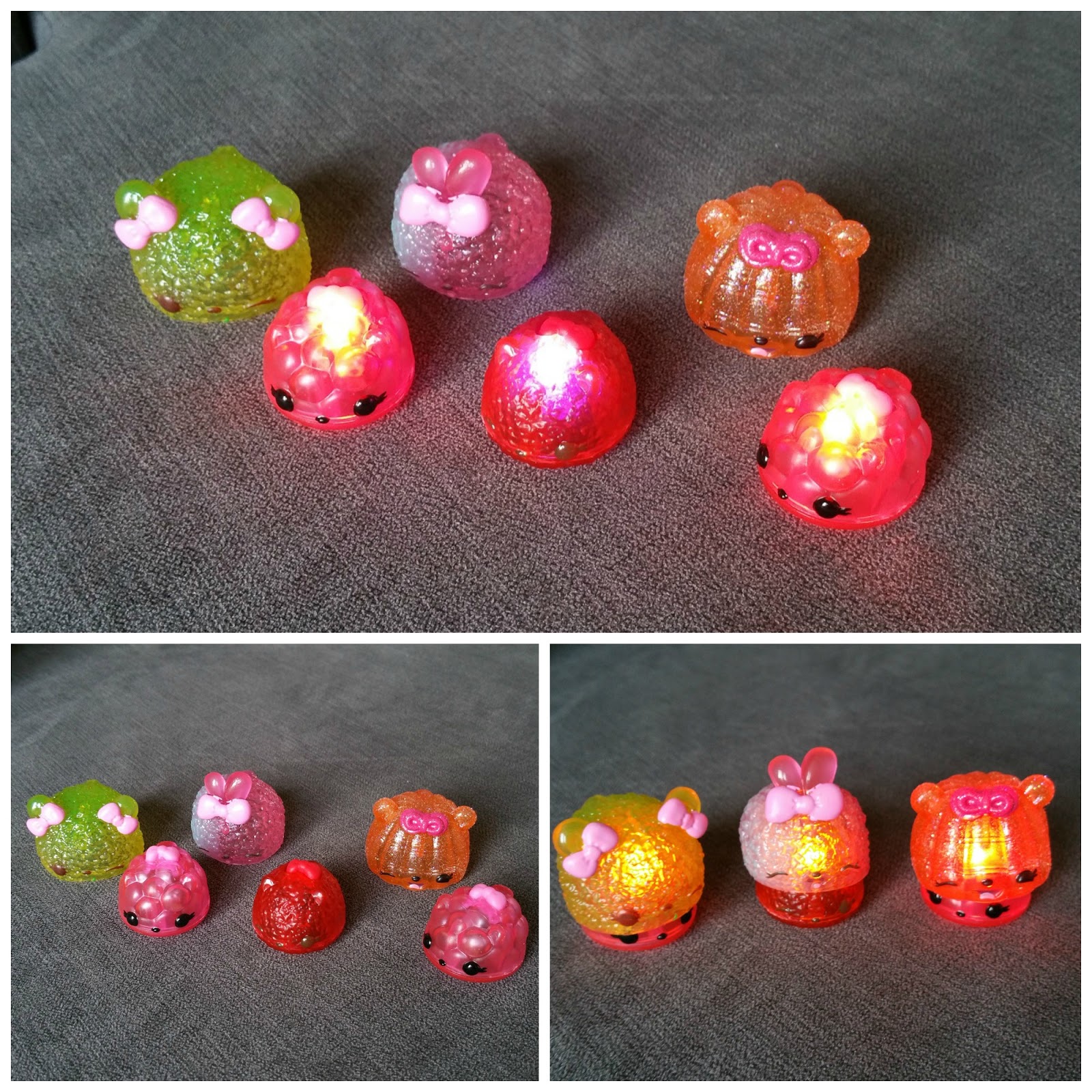 Together with Num Noms series 3 is the launch of Num Noms Lights series 1 (approx. £3 per mystery pack, suitable for 3 years+), which comes with scented Nums from the Snow Cone, Gummy and Freezie Pop categories, and scented Noms that lights up in 2 colours (red and blue, red and yellow or blue and yellow)! We love them on their own or stack them together as it creates a different light up effect.

Num Noms Lights series 1 currently only comes in mystery packs, but they also have a Freezie Pop Maker Playset as well, which allows you to make frozen lollies (comes with flavourings) which lights up too!


We absolutely love the new Num Noms series, they definitely make our collection even more interesting! We can have the Go-Go Noms buzzing and run around the Light-Up Noms! We have fallen in love with the Jelly Beans Nums from series 2 because of the new transparent look, and there are even more transparent Nums in series 3, so we are very happy with the new series!


Our Christmas was filled with Num Noms happiness, together with what we've received above, my lovely niece *insert blow-kiss heart emoji* also gave Abby a Num Noms Lights Mystery Pack for Christmas, and Abby has also received the Num Noms Lip Gloss Truck Playset (review to follow) for Christmas, which she's been eyeing at for ages.

Our Num Noms collection has expanded so much since our last update, I'll find an opportunity to take a picture of all of them together again. We can definitely do with the rest of the collection though. Luckily the year has only just started, so there is plenty of occasions for us to collect more!